My husband really wanted to try a place that was new to us.

He had heard it had one of the best burgers in all of the Twin Cities. As a burger aficionado, he just knew he had to try it out before he writes a guest post on burgers here at Season It Already! later this month..

For me, it was a surprise. He drove to Northeast Minneapolis {one my favorites parts of the Twin Cities}, so I wondered what was up his sleeve. And as we drove passed Anchor Fish & Chips, I knew that was where Rob wanted to go.

But there was a line of people trailing out the door.

{This is why we usually go out to eat earlier than most people our age. If not, we try to snag two seats together at the bar.}

He looked at the line and disappointment overcame him. I told him that we had no idea how fast that line went, so we had to at least go in to check it out. He obliged. We got in line and asked how long the wait would be. “Uh… Maybe about twenty-five minutes,” the gal said. I looked at Rob. He said, “Great. You can put our name down…”

WHAT?! Did I just hear what I think I did?

She told us we could get a drink at the bar if we’d like and either stand in the entryway or go outside in the back. Whew. Something to keep him occupied for a little while longer… 😉

The place was buzzing. Tables were full and although there were two seats in the bar area, we found out that people waiting would be seated there, too. We couldn’t snag a seat. A beer it was. I saw on the menu something I love to order whenever I’m at an English or Irish pub: 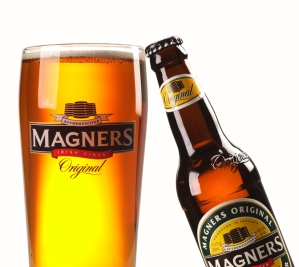 Drinks in hand, we headed through the restaurant out to the back parking lot. I saw people getting up from two or three different tables. It won’t be long now, I thought. Outside, the lot reminded me of a place where employees would go out for a smoke break. It wasn’t really meant to be set up for customers. {Maybe one of the guys out there smoking and on his cell phone was an employee?} We enjoyed the lovely late afternoon weather, but didn’t need to for too long…

In less than ten minutes, the woman came out to get us. We were seated and each opened a menu on the table. It was short and simple. To me, the menu items looked authentic from what I remember from my travels in England twelve years prior. 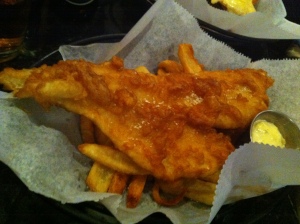 How could I not!?

When a restaurant has the phrase “fish and chips” in it’s name, shouldn’t it be our duty to give their signature item a try? Yes, I am in the process of losing weight. No, I did not plan for these calories since it was a surprise night out. Yes, it was going to set me back. But honestly, I could not pass up this opportunity. {Call me weak, if you will, but I don’t look at it that way.} There was little to nothing of healthy value on the menu anyway. And instead of griping about Rob taking me to a place where he knew there were no healthy options, I decided to just indulge in the experience.

And it was worth every bite!

I was a little worried about how my body would handle all the grease. I hadn’t eaten anything deep fried in a long time {other than stealing a few fries from his plate here and there.} But I did just fine. Still, I know that I ate way too much. I should have practiced The 50% Solution. That is something that I would do differently if I could do it over again. But surprisingly, I didn’t feel stuffed. Maybe my long run after work had worked me up an appetite? Still, I do know that this was not the food to replenish my body. It’s not something I’d do every day. Knowing that, I enjoyed it and didn’t feel one bit guilty. 😉

I had heard that the fish and chips at Anchor were tops. However, I didn’t understand how fish and chips could really be different anywhere. Now I do! I really can’t explain it. The fish was flaky and not too greasy and the “chips” just like I remembered in England. You are going to have try them for yourself.

Since Rob is allergic to fish, he opted for:

Actually, he opted for the burger because he had read somewhere that it was one of the best in the Twin Cities.

His verdict? Well, you will just have to wait to find that out on his guest post later this month!

My verdict: I bit into the burger and all I could taste was ham. Ham is fine on a burger, but I wanted to taste the burger, too. Maybe I got too much ham in my bite? Nevertheless, I loved my fish and chips more.

Would we return? Why yes, of course. It may be a while since I don’t need another 1000 calories for dinner anytime soon. 😉 But I did learn that if I’m going to have fish and chips in the Twin Cities, why go anywhere else?

The Anchor Fish and Chips will be launching a food truck at the end of May, too!

What is your favorite place to order fish and chips?

Do you make a healthier alternative at home?