When I’m on vacation, I expect to come back and gain five pounds.

It’s not that I throw all caution to the wind or treat vacations like a free-for-all. This time, I didn’t decide to take a week of “free days” or tell myself that I’ll “start over” when I get back. I know that this is life and I have to learn to be conscious of what I’m eating everyday, just as I admitted in this post last week. However, I do expect to indulge a little bit. They key is not to overindulge.

However, when I returned from our vacation from the Hawaiian Island of Kuau’i. I was surprised when my next-morning weigh-in put me at two pounds under.

How is that possible!?

Of course, I weighed myself a second and a third time just to be sure. 😉 I mean, really, that wasn’t near the average amount I’d been losing on any given week!

I did loosely track my calories in my iPhone app {for the most part} nearly everyday, if only loosely. I did a lot of guess-timating! I kept thinking to myself:

Or just a fluke?

I decided to accept that it could be possible. I gave it some thought. But looking back on the days I tracked, I averaged going over on my calories by about 700. Granted, I do have my app set to calculate calories for me with the plan to lose two pounds per week. {I don’t expect to lose that much. However, I was finding myself going over on calories a lot, so I decided to give myself more leeway this way.} This meant that at my current weight, it’s giving me about 1300 calories to play with per day.

However, I was also tracking my exercise. This means that if we golfed nine holes, I’d put that in my app, which in turn gave me more calories for the day. So even after using my exercise calories, I was still going over about 700 calories!

So I considered the fact that I had gained a small amount before I left. I did run my first 5k two weeks prior to leaving, but then quit exercising completely 😦 right up until departure. So that might explain the weigh-in a little bit.

Still, a loss is a loss! I expected to gain on vacation and I didn’t! Here are a few things I attribute to that.

On our first full day in Kuau’i we ventured over to Costco to stock up on some groceries and adult beverages for the week. With six of us in one condo equipped with a refrigerator, stove and oven, it made sense to eat in once in a while. We picked up Rob-friendly meats, greens, cereal, prosciutto/salami/pepperoni wrapped mozzarella sticks, granola bars, chips {Maui onion included!}, juice, rum, gin, beer, pineapple… We also picked up some things that we didn’t need quite so much of at the grocery store like dressing, milk, limes, croutons, nuts, tortillas, buns and coffee. We supplemented with trips to the store throughout the week. By eating in we not only saved on the extra calories we all tend to eat with oversized portions at restaurants, but we also saved money!

When I heard that there was a big Farmers Market on the island, I begged to go. I love going to markets in Europe to see all the local foods and goods. We should all eat locally and in season anyway, right? Not only was our trip to the Farmers Market a delight to the senses, but I picked up a few things and brought them back for everyone to try.

Would we be in Hawaii without pineapples? These were low acid.

They gave me a sample of the rambutan! Sweet and ono (the Hawaiian word for delicious) 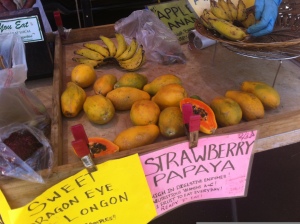 Did you know there are different varieties of papaya?

I believe this is rock fruit – I did not buy nor try.

I was surprised that most of the produce was fruit-based, whereas back in Minnesota, farmers markets offer mostly vegetables. However, we got there when they were just about to pack up, so that could be a little misleading. I can’t tell you exactly what each fruit tasted like. There are too many to remember! In most cases, you’d open the fruit up, suck out or dig out the fruit in the middle and discard the pit and outer shell. Sweet and juicy would describe nearly all that I tried!

I absolutely love breakfast, but something I’ve learned along the way is that no matter how much I have for breakfast, I still eat the same amount of calories during the day, which adds up to more calories overall at the end of the day. I have learned that, for me, it’s best to eat a lower-calorie, but more filling breakfast in order not to go way overboard on calories every day.

While cereal was at our disposal at the condo, I just wasn’t feeling it that week. I don’t eat cereal very often anyway. And since I always travel with a few Fiber One 90 brownies in case I need something to tide me over or a chocolate fix, I had one of those a couple of mornings. Other mornings, I ate fruit from Farmers Market purchases: 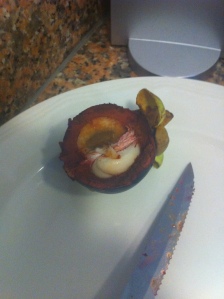 The center of a Mangosteen – one of my favorites!

(The Lychee and Dragon Fruit also served to form teams for golfing!)

I did opt to try Macadamia Nut pancakes one morning, but found them disappointing. Rob’s Kalua pork and rice with eggs was much more satisfying!

Most days, we came back midday. There was no real lunchtime and I didn’t find myself starving. Everyone just seemed to pick at what was in the pantry or fridge and munch on leftovers. My app shows that the couple days that I didn’t eat out, I mostly snacked on those meat-wrapped mozzarella sticks, nuts and even a handful of chips here and there. It kind of surprised me. At home, I’d probably need to make sure I had a “meal”.

We dined out a few nights and I’ll highlight those restaurants in an upcoming post. However, eating in kept my portions in check. We had plenty of greens that there was enough salad for all of us at least three of the nights. And let me tell you, it was one of the best ever!

When we ate in, I tried to load up on the salad and protein and limit my intake of rice and bread. I think I was filling my plate somewhat like this without even realizing it! 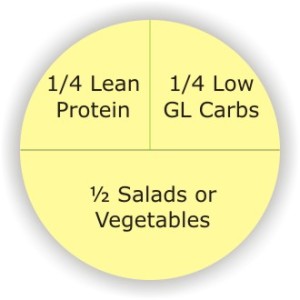 We did have the opportunity to get some fresh fish, too! We were lucky to let the guys cook. The slighty seared Ahi Tuna and grilled Mahi Mahi were some of the best I’ve tasted. {Don’t worry, Rob got to try some local sausage!}

Of course, when on a tropical vacation, it’s hard to pass up an umbrella drink. And I wasn’t going to do that anyway! However, I sipped slowly and savored the flavors. It was truly relaxing. And I did my best to only have one no matter how good they tasted! I tried to remember and practice quality over quantity.

The guys got a ton of exercise in just by golfing five days out of seven. However, we ladies got our exercise in by taking walks in the morning! I was lucky that these two fit ladies let me tag along: 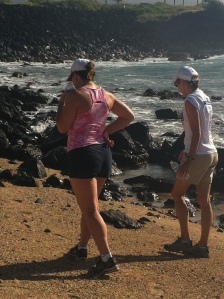 Nearly every morning, we went for a one-hour walk. And I’m not talking about a little stroll. I’m talking about a get-your-heart-rate-up-you-are-going-to-be-sweating-by-the-time-you’re-done walk.

Besides my running shoes and an extra ratty ol’ pair that Lisa recommended bringing, I originally packed my heart rate monitor, earbuds, iPhone arm strap, sports bras and workout clothes. Considering the rule of packing {pack everything you’d like to bring and then take half out}, I thought about when I’ve really exercised on vacation. Uh… like, never. So I took those items out. Boy do I wish I hadn’t! I would have loved to see my heart rate and tracked my calories burned on those walks!

Would I have gone on those walks if they hadn’t? Probably not! So they had a big part in my weight loss that week. They knew exactly where to go – follow roads along the beach, then cut through some resort properties… {Hey, sometimes our destination was Starbucks!} I probably would not have pushed myself to go that fast either. I wonder if I had never begun running nor lost 30 pounds if I would have been able to keep up with them? Sometimes I was out of breath when the other two weren’t, but ultimately, I loved it. I am so grateful that they let me tag along. If not, I would not have had the opportunity to take in the views to follow…

One day we hiked along the beach and before I knew it, we were hiking up upon cliffs. {My fear of heights kept me from the edge.} At times, I’d let the girls go on ahead so I could take a few photos. 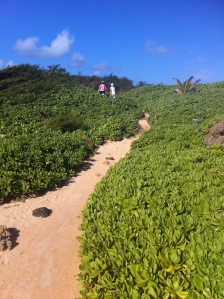 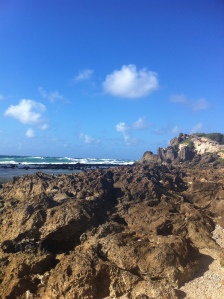 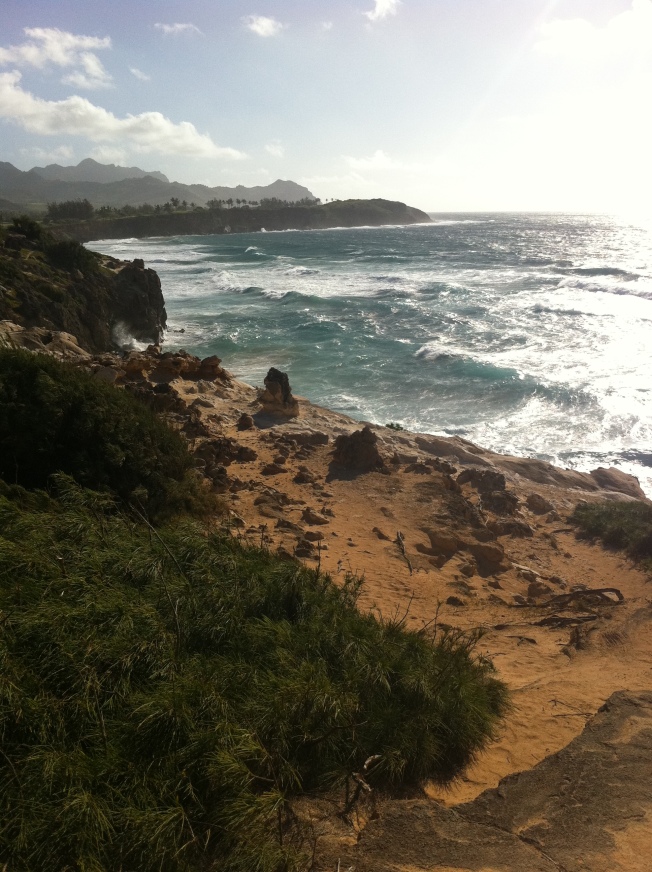 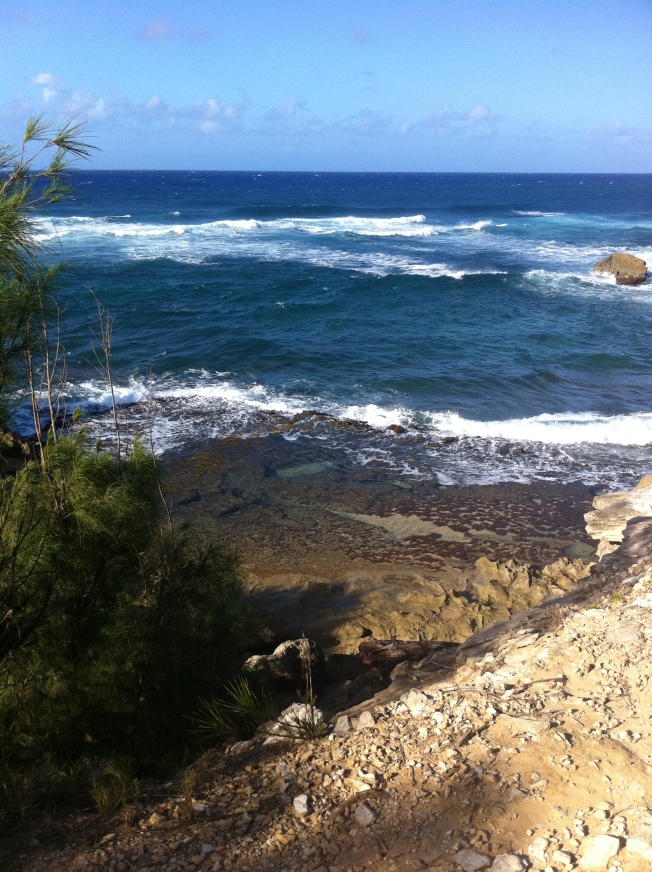 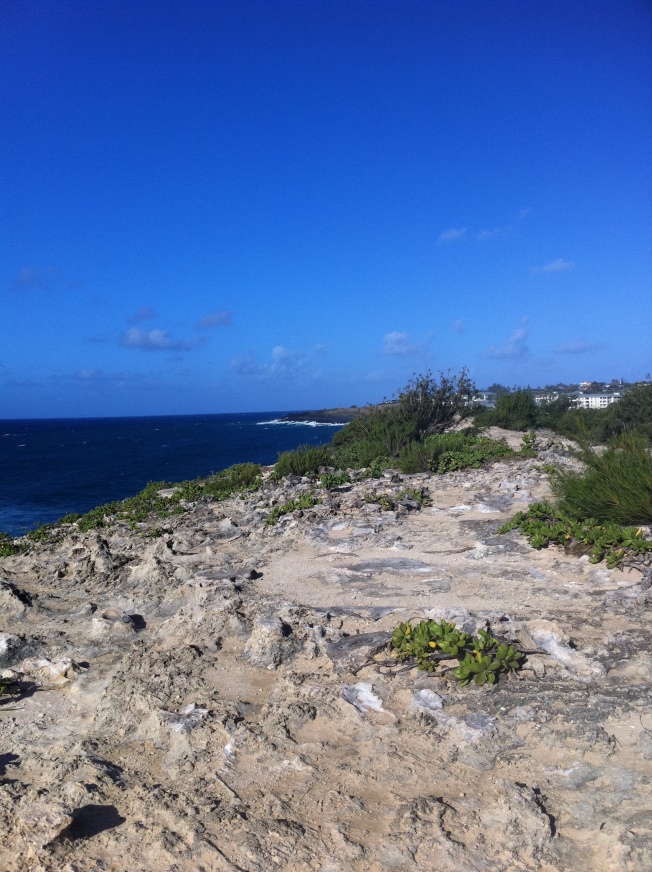 And that is even more worth it than any two pounds…