I was feeling binge-y. And tired….

It was the night before my my second-ever 5k race and my tasting scheduled for that night had canceled. There were pros and cons to this. A tasting would mean I’d be out late and would be wound up when I got home, making it difficult to go to sleep. But a tasting also meant I’d be distracted.

The night before my first 5k, I was nervous. I ate too much. I didn’t know what to do with myself. The same thing was beginning to happen. I got home from work knowing that Rob wouldn’t be back for a while – he was out golfing. I didn’t want to do anything. I wanted to eat and lie on the couch.

I told myself that would do nothing for me, considering how many other things I needed to get done.

So… since it was such a glorious day, I seized it. I grabbed a piece of Dove dark chocolate with almonds {a small token of happiness for only 35 calories!} and went to lie in the hammock in the sun. Sophie came to join me. She was so happy and waggy-tailed that how could I be down?

It was then that I professed that I would enjoy the hammock for another five minutes and then get up and try to take the old-man dog for a walk. He loves walks, but he’s been rather slow moving as of late. But every time I’d take Sophie out for a walk he’d stare at the door with a look on his face that read, “Why aren’t you taking ME?!”

Dogs begging to be walked

And if it weren’t for the #RWRunStreak, I would have never motivated myself to get up and go on that walk.

As, I put the leash on him, Sophie got excited. She thought she was going, too. But, for the first time, I decided to take Benny alone. And I’m glad I did. He didn’t seem to rush to run ahead of me like he usual does. And I think he would have pushed himself further if she was with us. Instead, he kept to a slow pace, stopping every once in a while. I could definitely tell a difference in him. I didn’t want to take him too far, so we turned around not far into the walk. I bet we only went a quarter of a mile round-trip. But I knew he was satisfied to have been on a walk.

When I got back, I decided to take Sophie around the block. She was just way too excited and I needed complete a mile for my commitment to the #RWRunStreak. Along our walk as she reacted to all the sights and sounds, I wondered why I had been depriving her of this experience all of these years!? What a bad dog momma I am.

Upon return, I made myself some night-before-the-race dinner: a Morningstar Chipotle Black Bean Burger {I love these things!} on a Bagel Thin with tomato, onion, and guacamole with a side of tomato: 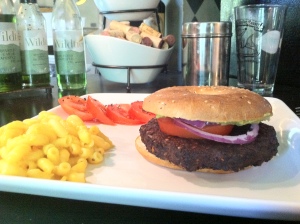 Okay, so a little leftover mac and cheese made it on my plate as well. Did I overdo it on the food again like I did the first time? Perhaps.

I spent the rest of the evening cleaning, drinking water, planning upcoming wine tastings and trying to calm myself. {Since this 5k was at a different location, I still had a bit of anxiety of not knowing what to expect.} I also laid out my clothes and determined my breakfast because we all know that non-morning-Carrie’s brain doesn’t function well in the am. 😉

In fact, the non-morning-Carrie part of me knew that I had to get used to a morning run thanks to the advice from other runners. Plus, I knew it wouldn’t hurt to start doing morning runs anyway as heat and humidity gains on us as summer rolls around. So the previous week, I did a four-mile run in the am. Will I get used to morning runs? I’m not sure quite yet…

Then I did what my mom always told me is the best way to fall asleep quickly: Take a hot shower before bed. It works!

When my alarm went off, my eyes took a bit to pry open. My head was stuffy. Allergies. Ugh. Along with my breakfast and water, I made myself some hot tea with honey hoping to loosen up the stuffiness.

I also had a small Americano at the race. I know I stated here that I don’t need coffee everyday. But even on the weekends when I run, I have a little more time between waking and actually running than I’d ever have on any race day.

This 5k was a much smaller one and as people arrived, I started to get nervous. These people were fit! I had an extreme fear that I would come in last, despite the fact that my friend Stacy said that it would never happen. The closer we got to the start time and the more I looked around, the more nervous I became. 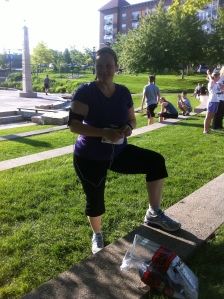 Me – with pre-race jitters

I lined up near the back since I didn’t expect any walkers. {The 5k walk was supposed to take place about 15 minutes after the 5k run.} Since the event coordinator didn’t have a megaphone, I couldn’t hear what she was saying over the crowd. I just started running when the crowd did.

It was one of the hardest three miles I’ve ever run.

The first leg was a hill. Are you kidding me? Okay, so it wasn’t really hill, but a slow incline. This got my heart rate up immediately, despite the fact that people were passing me left and right. I kept thinking about coming in last. I was not in a good place mentally. And while it was a beautiful day, there was virtually no shade along the route. It was hot and it made me wonder how I could possibly run during the summer.

In retrospect, I should have thought more about all of the people I knew who had run the Green Bay Half-Marathon a few weeks prior when the race closed down due to the unsafe heat and humidity conditions. Why was I being such a baby?

But no. I stayed stuck in my negative mentality. I was starting to get annoyed by the people who stopped to walk. I’d pass them and five to ten minutes later, they’d come up and pass me. These people all finished the race before me. This is something I am definitely going to have to get past. I have to remember that my goal was to run the entire thing. Other people may be using the 5k as interval training. Or they may have injuries. I had to stop thinking about them and focus on myself.

Yes, I know that now.

I rounded a corner and there was a water station. While I normally don’t take water on my three-mile runs, I was feeling a little parched and decided I should seize the opportunity. I didn’t stop or walk, I just grabbed one as I jogged by. I tried to sip some water. Now I know why people stopped to walk. Drinking this water running was nearly impossible. Then, I took a big gulp and I choked, coughed and all the water came pouring out of my mouth. Gross. I tossed the remaining water in the cup to the side with the other cups along the trail.

There were no mile markers, so that was a bit of a bummer. That first “hill” had elevated my heart rate so much that I remained in a Zone 5 on my HRM for most of the duration of the race. I normally stick to Zone 3 or 4 and move to Zone 5 when I want to step it up a notch – like at the end of the race. But people kept passing me and my thoughts were still on finishing last.

At one point, I passed two fit girls who started walking. However they passed me again as we neared the end. This time, one girl was sort of limping as she ran. She must have had an injury. Me? I was uninjured and slower. I felt sad and pathetic. They remained steps in front of me for the duration of the race, conversing the entire time. I planned to overtake them at the very end; however, the race ended with a hill {okay, another slow incline} as well. Not kidding. So cruel. I checked my HRM and my heart rate was the highest I’d ever seen it, so I wasn’t sure putting any extra effort was that great of an idea.

Yes, I beat my first 5k time of 38:54. But I was crabby. Despite this, Rob was awesome. The first thing he did was tell me where I could find water {it wasn’t near the finish line} and bagels. He let me be in my crabbiness. I told him I wanted shade. He followed me. I sucked down that non-chilled bottle of water {really?} and tried very hard to remember three things:

I should have been happy. But all I kept thinking was, “Why am I doing this?” and “Why isn’t this getting easier?” and  “Maybe I’m not cut out for this.”

Another thing to be happy about:

Out of 139 finishers, twelve people finished after me. 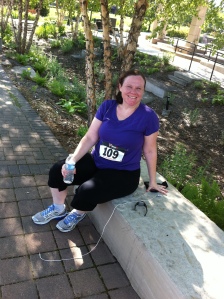 I managed a smile post-race.

Don’t worry. I may have been crabby, but I’m still proud and I’m not giving up. I’m done with this pity party.