He did it again!

My husband wanted to surprise me with a new restaurant. On a random weeknight, he asked me if I wanted to go to La Chaya. I assessed my calories for the day and took a look at their online menu again – a great tip for healthy dining out.

However, when we made our way to south Minneapolis, we did not stop at La Chaya. We kept on going.

“Where are we going?”

Upon arrival, we drove around the neighborhood for a place to park and found a spot right behind a big truck marked FBI. Huh? Let’s just say it wasn’t the FBI. A little bit of profanity in the tagline below the initials.

Anyway, at this point, I still didn’t know the restaurant until we walked up to it –  The Lowbrow. I hadn’t heard of it! I swear, South Minneapolis doesn’t get any recognition for all of the great little restaurants dotting the neighborhood streets. I might just have to start a blog on South Minneapolis. 😉

When we sat down, I was pleased to see that there were mostly Minnesota craft beers on tap:

Almost all MN beers on tap. None of that light crap.

I looked at their selection of wines, too, and just as I was about to decide, Rob ordered for me:

“We’d like one each of the Fox Barrel Ciders, please.”

Then he told me that this is one of the reasons he wanted to come here. When we went to the Twisted Fork Grille, we were anxious to try the Fox Barrel Blackberry Pear Cider on tap. But they were sold out. At The Lowbrow, the Fox Barrel Ciders are sold by the bottle, but they are on their regular beverage menu. Sure, $12  may seem like a lot for a beverage. However, these are 22-ouncers. If we each would have two drinks, in Minneapolis that comes to about $12 anyway. The plan was to pour half of one cider in our glasses and then switch. {No, not mix them. Basically, we each get to have half of each bottle to try.}

Okay, so these pear ciders weren’t from Minnesota, but we’d never found nor had them before. Besides, I’m not a fan of Crispin. Anyone who thinks you need… no, encourages you to put cider over ice is crazy. In essence, they don’t want you to taste their beverage, but drown out the flavors. There’s a reason light beers are served “ice cold”. I fear this is a new phenomenon catching on with cider because bartenders have been asking us more and more frequently if we want a glass of ice with our cider. 😦 Yes, cider should be chilled, but not diluted over ice. But I digress…

The Verdict? Both pear ciders were very, very good! I think that I liked the Rhubarb one a bit better just because the Ginger one was a bit too gingery for me. However, Rob said he thinks he liked the Ginger one a little better. This surprised me, because he hates when I cook with ginger! {Maybe he just hates when I cook. ;)} Nonetheless, we’d drink either of the two again any day.

By now, you’ve probably noticed the bar top in the photos. If not, look a little more closely: 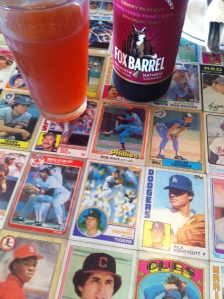 Baseball cards make the bar top! This is a good use for them – sports cards don’t have much value these days.

As for the food, I love The Lowbrow’s philosophy:

Anytime a restaurant is using fresh, high-quality ingredients and supporting the local community, I am in! I wanted to make a good choice that night, knowing my calorie alottment remaining. However, Rob told me that this place is known for their grilled cheese. Okay, so at least I got it with salad instead of fries and had them put tomato in the grilled cheese. A compromise, right? 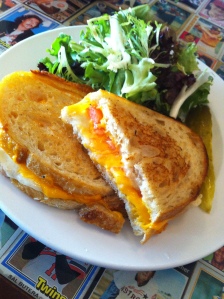 Grilled cheese – choice of Wisconsin Cheddar, Swiss or both. Um duh – BOTH!

Rob got a burger and fries. He decided to cut the burger in half so we could each swap halves!

“All Burgers at The Lowbrow are made with 100% grass-fed Minnesota Beef.”

If we go back, I’m sure Rob will have another grilled cheese. I will try something else on the menu and maybe one of their specialty cocktails. It looks like a great place for brunch!

What is your favorite grilled cheese or cider?