This weekend, we were invited by one of Rob’s co-workers to enjoy America’s Favorite Past Time. I’ve never been a huge fan of baseball itself. {I’m more of a football girl; but what do you expect from someone who grew up in Green Bay, Wisconsin?} Still, I can appreciate the time outdoors, the laughter and just the all around feeling of summer that a ballpark provides. And of course, it’s hard to pass up ballpark food. But, as spectators of sports, we sit several hours on our behinds watching the game, which isn’t beneficial in the land of the obesity.

Since I knew we were going to a St. Paul Saints game that Friday, I was sure to eat extra-mindfully throughout the day. That way, I could indulge in and truly appreciate a hot dog and a beer without guilt. Little did I know that there would be a wide variety of food options available! Sure, it’s expected on a trip to the impressive Target Field to find way more than your run-of-the-mill ballpark offerings. However, I was expecting little more than peanuts, cracker jacks, hot dogs and mediocre beer at this value-priced non-MLB game. {I have yet to understand this one. The Saint Paul Saints are not really minor league nor AA or AAA either. They are part of the American Association of Independent Professional Baseball.}

Surprisingly, at Midway Stadium, there were at least a dozen varieties/flavors of adult beverages to choose from. As my friend Jen and I ordered our hot dogs, we most certainly checked out the ice cream options for later. Ice cream is a weakness of mine. In fact, I can’t keep it in the house.

Our hot dogs were only $2.50 each. $2.50! Game tickets were inexpensive, too. I understood, then, why so many kids were running around. What an inexpensive way for parents to get the younger kids out to a game and not drop hundreds of dollars. There were also swings and a bounce house to keep them entertained. A night at a St. Paul Saints game is more than just the game. There’s entertainment for everyone, including prizes and contests between each inning. The night we were there, they were even celebrating the marriage of two pigs: Kim LARDashian and Chris HAMpfries. Ha.

It was a sunny, but slightly breezy evening, making it perfect baseball weather. I was quite relaxed and content. Later, during the game, Jen got up to find the restrooms. Upon return, she told me about a vendor around the corner that had veggies and fruits: strawberries. blueberries and raspberries, she thought. She pointed out a little two or three-year old boy a few rows ahead of us chowing down on a cup of blueberries as if they were goldfish crackers. Enough to make you smile!

Did someone say raspberries??

Raspberries have become one of my favorite fruits! Sometimes, I find myself buying a half-pint clam shell of them to eat as a snack. 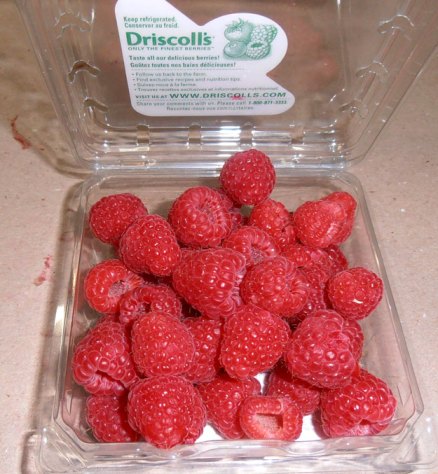 I’ve always liked berries, but it wasn’t until I started adding more fruits and vegetables into my diet about a year ago that I realized how much I adore raspberries. They have one of the highest fiber contents of all fruits, too, at eight grams per one-cup serving.

So, I just had to check this out. Fresh fruit at a baseball game? Who knew?

Sure enough, a vendor called Yum Power by Health Partners was set up just around the corner. However, I wouldn’t have noticed it if I hadn’t been looking for it. The fruits and veggies were not exactly on display. There were signs, but I completely missed them the first time I walked by on my way to the bathroom. I had to ask if they had raspberries and how much they were. When I returned after my restroom break, I saw a sign that listed all of their offerings:

I love all of these things! Of course, I picked up some raspberries:

Ballpark Cup o ‘Raspberries: I ate these instead of ice cream.

I paid $5 for these beauties.

It may sound like a lot, but how much do you spend on a beer, brat or ice cream at a sporting event you’ve paid to attend? In addition, consider the following:

I think for ballpark food, this is a great deal. The markup isn’t as high as many other foods, in my opinion.

In any case, I’m impressed. America, this is a step in the right direction. Thank you, Yum Power, Health Partners and the St. Paul Saints!

Have you found healthy choices at sporting events?

If so, where and what were they?