If you aren’t from Michigan or don’t intend on traveling there anytime soon, please stay with me!

You just may learn a thing or two about travel and dining. Or you may be inspired to create a dish…

Our Michigan trip each year tends to be an inexpensive one. Everything seems to be so much cheaper there. For me, it’s been this way since I started traveling there in 2004. The state’s economy wasn’t doing well even before the nation’s economy tanked. For this reason, I’ve always had trouble when I’ve heard Minnesotans complain about the economy. While it’s not to say that there aren’t people struggling in our neck of the woods, the impact is more widespread in Michigan. And while Rob and I have known that Gladwin County is one of the poorest in the state, we learned this year that all but two counties in Michigan are considered below the poverty line.

When we visit family and friends in Michigan, we try to stimulate the economy as much as possible. And since we love to dine out, it’s our way to do so. In the small town of Gladwin {population just under 3000}, we’ve seen restaurants come and go. I think it’s difficult for restaurants to make it when there aren’t many people with the disposable income to support them. Still, one of Rob’s parents’ favorites and one we frequent every year is Mr. M.’s Pizza & Lounge. 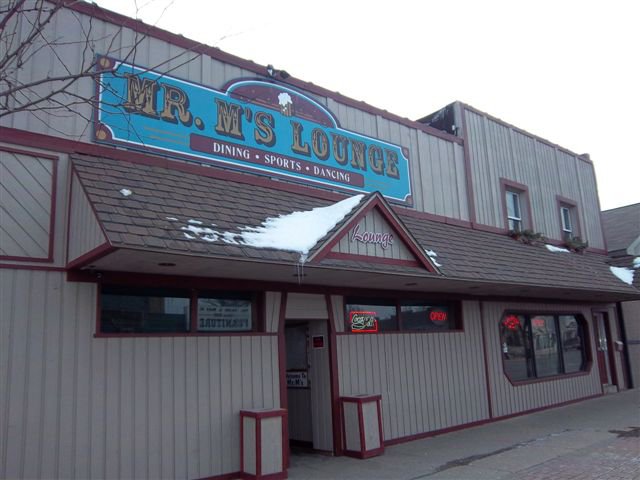 I apologize that I did not take any photos at this restaurant on this trip. Sometimes, I just get caught up on vacation. However, I went online to look for a menu, but Mr. M’s doesn’t have a website other than their Facebook Page. And since Mr. M’s menu is absolutely huge, I spent about an hour in search of it online hoping to find it someplace else. I was not successful. It makes me wish even more that I had taken pictures of not only the food we enjoyed, but also the menu!

This place is in need of a makeover. The décor is not only dated, but worn. And the bar side of the establishment still reeks of smoke although smoking was banned in Michigan restaurants in 2010. If you’ve ever watched Restaurant: Impossible with Robert Irvine on the Food Network, Mr M.’s seems like a good candidate for an overhaul. However, I’m not sure how feasible this would be for the owners. While the prices of the food are pretty low, I can’t imagine an increase would be a great idea in this community. Perhaps it’s just not a priority right now.

And while Robert Irvine would also frown upon the overwhelming number of menu items, somehow Mr. M.’s makes it work.

Included on the menu are:

And here are some of the items we enjoyed:

Sidebar: I once asked for fresh mushrooms on a pizza at a local pizza place here in Minnesota. The server said to me: “We most certainly can do that for you!” When the pizza came out, she was so proud. “Here you go! I made sure that they didn’t put the mushrooms on until after the pizza was cooked!” By fresh mushrooms, she thought I meant raw, uncooked mushrooms. Tee hee. I didn’t have the heart to explain to her what I meant. From now on I just asked if they use canned mushrooms. 😉

There are too many items on this menu to try everything and I know we have in years prior. However, we stuck to the pizzas and my salad this time around. Rob’s mom suggested that we split a plate of fried green beans with a side of ranch dressing as an appetizer one night. Great alternative to your typical bar food!

And while alcohol is served at this establishment, it’s not a great place for beer or drinks. Why? Your best choice for a “unique” beer on tap would be LaBatt’s Blue. Yep. In addition, Rob ordered gin and tonics on a couple of occasions. Each time, they were weak and took quite a while to come to the table.

But this place isn’t about the drinks. It’s good, casual food at incredible prices. It’s a perfect place to bring your kids or a group of people!

Where have been your favorite inexpensive eat-in food joints?