Lately, we’ve been hearing and seeing not-so-great reviews about the Burnsville Ale House, a newer pub-restaurant off Highway 13 in – you guessed it – Burnsville. Quite frankly, we don’t understand it. In fact, we’ve been going there quite often. I was planning to write a post on this place after we’d tried a few more menu items.

However, I think it’s time we set things straight.

And now realize that we have tried quite a few things on the menu! And just so you know that we aren’t getting paid by Burnsville Ale House to write this post, I’m going to include the great and the not-so-great aspects of this joint. You’ll learn why we keep going back.

Over the years, the building that now houses the Burnsville Ale House has changed owners and names several times. However, it has still remained popular with bikers. This time around, the renovation cleaned the place up a bit, but the owners kept with the same layout.

While we do still see bikers walk through the door, it really is a place for everyone. In fact, in this sense, I kind of feel like I’m at the bar in the sitcom Cheers when I’m there. You’ll see people from different walks of life just enjoying a cold pint. We often recognize the same characters seated around the bar time and time again. And if you become a regular, they do learn your name. The first time I told my husband that I felt like I was at the Cheers bar was when someone started to talk to someone else all the way across the bar. Did you ever notice that they did that on the sitcom? Patrons didn’t have to be sitting next to each other to have a conversation!

On our first visit, I was honestly stunned by the number of beers in their selection, or lack thereof. This place is called an ALE HOUSE. The Lyndale Tap House and The Valley Tap House each have more than 25 beers on tap, many of which are craft or microbrews.

Maybe that’s what I expected? Even Burger Jones has more taps and selection than The Burnsville Ale House. If you are going to call yourself in Ale House you need to offer up more than your usual contenders and a couple of specialties.

Still, I decided to give them the benefit of the doubt here. It’s tough to open a restaurant. And having that many taps starting out is expensive and a huge risk. In any case, despite the fact that they may not have a huge number of taps, they do offer a little something from almost every category. And I truly believe that is more important. See, I’ve come around!

Happily, we were surprised to find this on tap here:

We first discovered this Minnetonka, Minnesota craft brew at the Groveland Tap and fell in love. {With the beer, not each other. We were already married at this point. Uh, to each other, not the beer.} This is the first time we’d found the Cammo on tap “South of The River”, and as far as we know Burnsville Ale House is the the only establishment that carries it in the vicinity.

It’s Rob’s go-to beer of choice at the Burnsville Ale House and one of the main reasons the place has kept us coming back. But the Cammo clocks in at 9% alcohol. It’s far too easy for me to have one too many! So when they started to carry another beer brewed by Lucid, I gave it a try. Lucid Air: Unfortunately, the name is accurate. It tastes like air. There is no flavor at all, in my opinion. However, if you like lighter beers, but still want to support the local breweries, this beer may be for you. So, while I prefer to still have a pint of the Lucid Cammo, I’ve been switching over to the nutty Alaskan Amber if I decide to have another.

Then there’s the food.

The food really surprised us here! Rob, my burger-loving husband, is quite a fan of The Gaspar, although he’s also tried the Bacon Bleu and the Bruschetta Fresh burgers and has been pleased with those as well.

And while they have been experimenting with the fries, I think they have finally perfected them! These fries are so good that they make Rob’s Top 10 list:

Golden Fries – Rather than describe these beauties to you, I’m challenging you to give’ em a try now. I dare you.

Rob also thinks this sandwich is the bomb:

The only sandwich I’ve tried is the Grilled Cheese:

Only I got the bacon on the side:

I like bacon, just not in or on a lot of things. I know… I’m the strangest person on the planet because of this.

So this is my Semi-Ultimate Grilled Cheese with tomato and basil only:

That cheese was so ooey-gooey that I really did want Rob to take a picture of me taking a bite, but the moment was lost…

Speaking of cheese, the only thing that sounded good to me one night we were there was a cheese plate. I didn’t have high expectations because, after all, this is a sports bar kinda place. We joked after ordering this Meat & Cheese Plate, that I’d just be served some slices deli meat and cheese plopped on a plate, like something you’d find at Cub Foods.

And that’s exactly what I got: 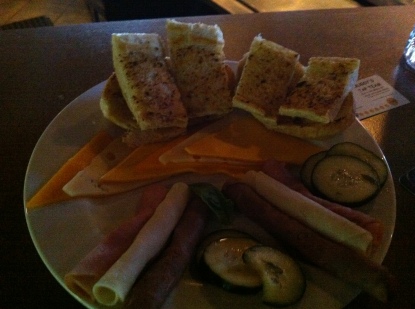 At least my expectations weren’t high. I wasn’t that hungry anyway, so I made a couple mini-sandwiches with the cheese, deli meat, and garlic bread. But by now, I know you are wondering when I’ve ever been able to eat healthy at the Burnsville Ale House. Well, I recently tried the Caprese Salad: 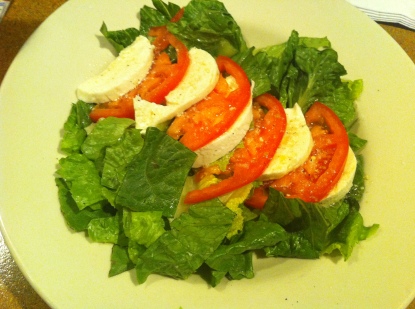 YES! This is what I’m talking about! It’s not your traditional Caprese Salad, but light and refreshing. It was exactly what I was in the mood for that day. The flavors were great, not just some tomatoes and mozzarella atop a bed of greens. I hadn’t read the menu carefully, so I didn’t know that this salad was actually dressed with an herb-garlic vinaigrette. After several bites, the flavors became a little overwhelming, but not so much that I couldn’t finish it! I will just make sure to order the dressing on the side next time so I can control my desired amount. Yes, you heard that… I will order it again! That mozzarella was oh-so-fresh and had me flabbergasted why that did not end up on the cheese plate!

And something I would have never ordered, but was recommended:

I’m so glad they were recommended! They were meaty, juicy and flavorful. They didn’t even need the gravy. They are definitely an item to order again.

We didn’t take photos of everything. But here’s our take on some other items…

Speaking of quesadillas, one time, I decided to order the Traditional Tacos

Traditional Tacos
Ground beef stuffed in choice of hard or
soft shell with lettuce, tomato & choice of red
or green salsa & a side of black beans {not shown} $8.95

When Rob bit into that taco, his eyes lit up. He loved it so much that he said he’d never get a burger at Burnsville Ale House again. My husband not get a burger at a place where he loves them? What is this world coming to?

We’ll just see if he holds to that. 😉 While I love the green salsa, Rob prefers the red because it’s spicier. I tried it and tasted a hint of smokiness, perhaps it is made with chipotle in adobo.

And if you expect cheese on your tacos, don’t order them here. Can you believe that the first time I had these that I didn’t even notice that there was no cheese? It’s only when Rob ordered them the next time, that he pointed out this detail. This stereotypically cheese-loving Wisconsin girl didn’t even miss it. That’s how good the flavor of these tacos is here. If you really want cheese, I’m sure you could ask to add some. But truthfully, cheese is not needed. I can’t believe I just said that.

We love the service here. It is attentive, but not overly fake. They know when to just leave you alone. It feels like a bar – like it should. But the bartenders do remember you if you visit regularly. The ambiance varies by time of day, so be sure to go at a time that suits your mood. An early weekend afternoon or Happy Hour might give you that Cheers vibe. The patio is very relaxed and perfect when the weather is great. If you got on Saturday night for live music, it’ll be much busier and loud, but you’ll be able to find a nice place to sit and relax.

No matter what, Rob tells his friends that this place is worth for a stop for a pint of Lucid Camo and an order of tacos. I wouldn’t disagree with him. 😉

Do you have a Cheers bar in your neighborhood?

If so, what do you like most about it?