While Labor Day may signify the end of summer for many people, it is also the beginning of The Rush. In Minnesota, we rush to get all of the things done that we wanted to do over the summer, but only have so much time left before the weather changes.

My birthday is at the end of September. Over the years, I’ve learned that even when the temperature can be in the nineties over Labor Day weekend, it’s nearly always cold, windy and rainy by the time my birthday comes around. This has made for difficult birthday plans. I make them while it’s nice out and by the time the day rolls around, it doesn’t quite work out. I usually end up saying to myself, “What was I thinking?! This happens every year!”

Still, one of the things that Minnesotans try to do as long as they can before the weather turns cold and bleak, is dine out on the patio.

One night, the girls and I went to Santorini Taverna in Eden Prairie. Luckily, it was not long after that unbearable summer heat wave. And dining out on the patio that night was absolutely perfect. I adore Mediterranean cuisine, too. So when Jen picked this place, I was delighted. There were so many appetizing options on their online menu!

When Jen pointed it out, I was really excited to try this cocktail:

I had really been missing the Lavender Cosmo at Palomino. And since I love just about anything with blueberries, I gave it a try. Unfortunately, I was quite disappointed. It didn’t really have much flavor and wasn’t anything special. I felt the same way about the:

However, Jen’s Sangria was by far the best cocktail served at the table: 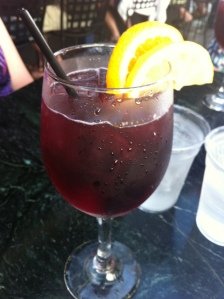 It was a specialty Sangria that I cannot find on their online menu. It had some interesting ingredients. Perhaps Thai basil? Regardless, it was one of the best Sangrias I’ve ever had. Of course, the St. Germain Sangria from Burger Jones still rules on this one. But let’s just say that the next time I’m at Santorini sitting out on the patio, you’ll find me sipping on Sangria. 😉

Our meals were delicious. We all went away satisfied! 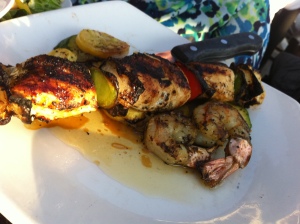 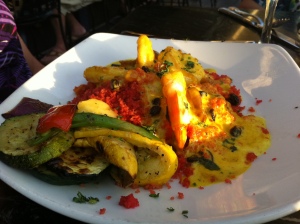 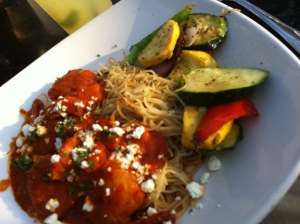 SHRIMP MIKROLIMANO
From the famed Turkolimano restaurant near the Piraeus Harbor. Sautéed shrimp with tomatoes, feta
cheese and flavored with fresh garlic and oregano
over angel hair pasta – $21

The Shrimp Mikrolimano was my dish. And while I think the photo looks good, it really doesn’t do the dish justice.

I cleaned my plate.

I’m quite certain I will not be ordering anything other than this ever at Santorini.

Passing that time with friends.

What one thing do you want to make sure you accomplish before the weather no longer allows you to do so?