At the Burnsville location {I can’t vouch for the Uptown one}, the moment you walk through the door, you see huge pictures of cows on the walls of the entryway. Okay, so we’re at a burger joint. We know we are eating beef. I get it. But I can’t imagine if we were at a Greek restaurant ordering gyros that we’d see sheep plastered all over the walls.

Am I the only one that finds this a little odd?

In addition, the walls of the bar area are covered with professionally taken photos of people. Not ones of customers or anything, but an entire string of blown up photos of people stuffing burgers into their faces or licking their lips.

And not very appetizing.

Despite these oddities, we keep going back. Why?

When I sit down and look at the line of taps to choose from, all is right with the world: 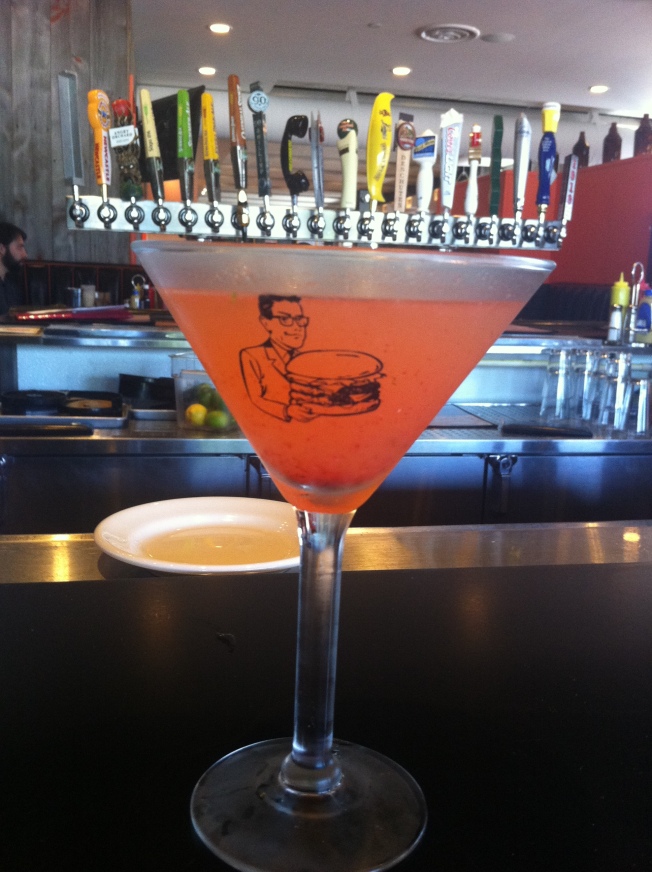 Burger Jones has an lengthy list of cocktails and beers.

It’s also only one of two restaurants “South of the River” that I know of that serves Strongbow Cider {in the can}. Still, I can honestly say that I’d save the Strongbow for the other establishment. There are just so many tap beer options here, that you wouldn’t find there. And there seems to be a newer one added each time we return. One of my favorites is: 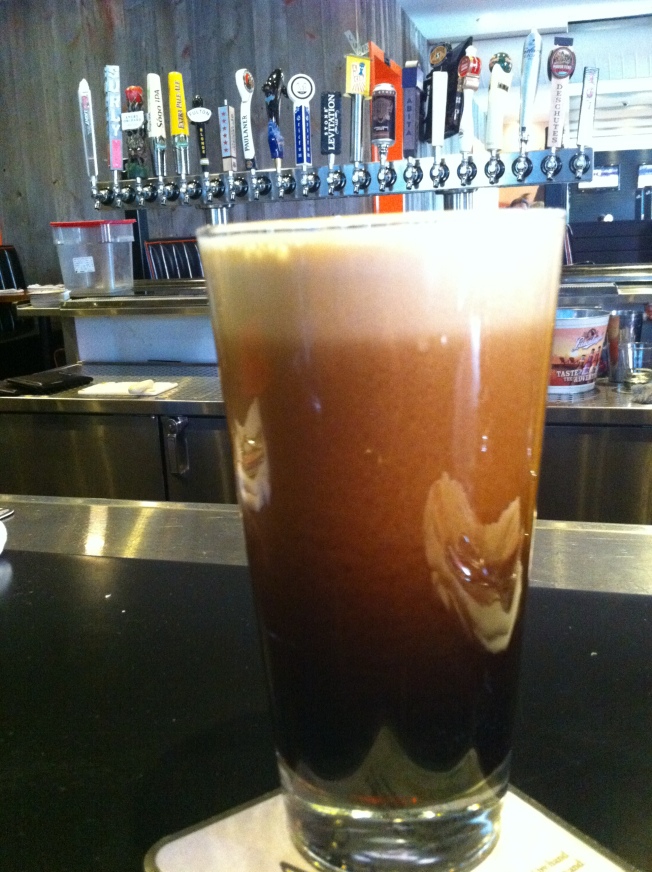 Again, it’s the only place “South of the River” that I know of that has this beer on tap. In fact, it’s tough to find Summit Oatmeal Stout on tap anywhere. That saddena me since it’s one of Summit’s best-brewed and most flavorful beers, in my opinion. {I’m sorry, even as an IPA lover, the the new Sága just doesn’t cut it for me!}

There are some fun cocktails on the menu, too: 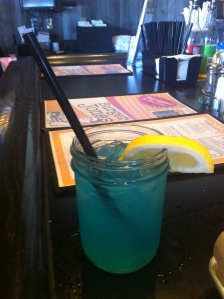 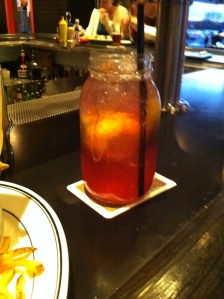 But my favorite of all is the St. Germain Sangria! It was taken off the menu for the winter last year. Then, this summer they added a peach sangria instead. I still haven’t tried that one because I continue to ask them to make me the St. Germain Sangria! Seriously, just ask for it and they’ll make it. If they don’t, they might be a newbie. But in my opinion, it’s the best Sangria ever. 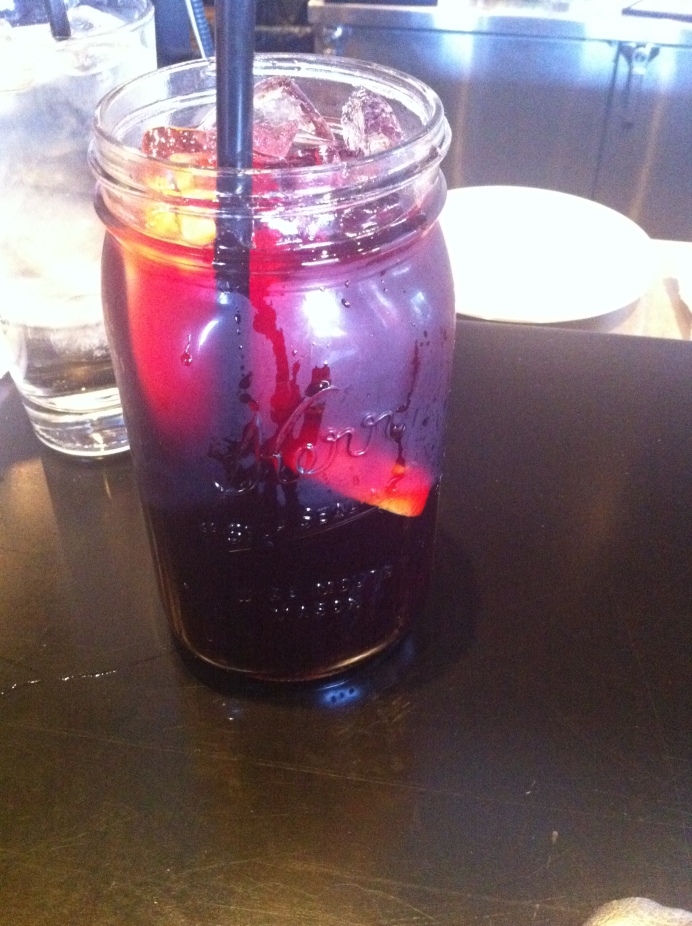 Of course, with a name like Burger Jones, you just gotta order a burger. Choose one on the menu already concocted or build your own: 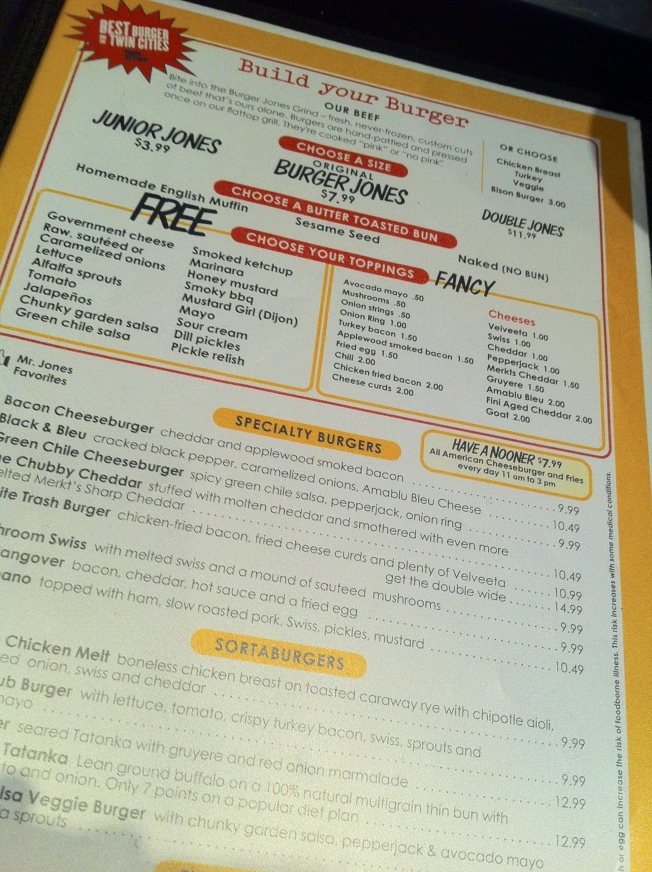 There is also a new Burger of the Month every month. However, we often forget about it. For some reason, when we eat at the bar, we are rarely informed of the BOTM. We usually think of it after we’ve already ordered or eaten. But there was one occasion when we remembered to ask and Rob ended up ordering it: 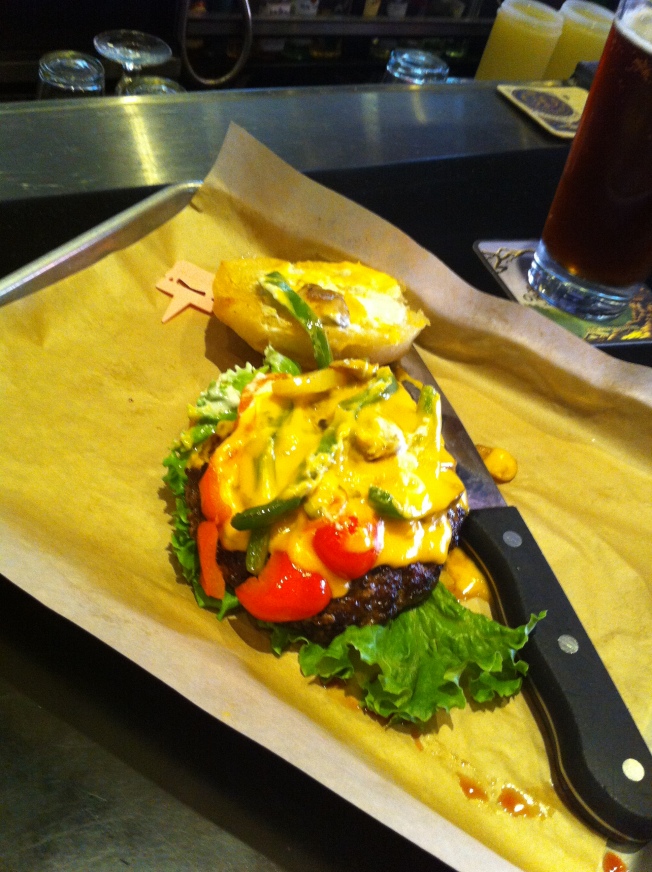 Rob said it was just okay. To be honest, the burgers here are good, but not really great. You have the choice of ordering your burger pink or no pink. Pretty straight-forward. Though, I’ve found that there is never enough cheese, at least not enough so you can taste it. Why pay more for the ever-flavorful Gruyere or Fini Aged Cheddar if you can’t taste them?

I’ve even stepped outside the box and built my own burger: 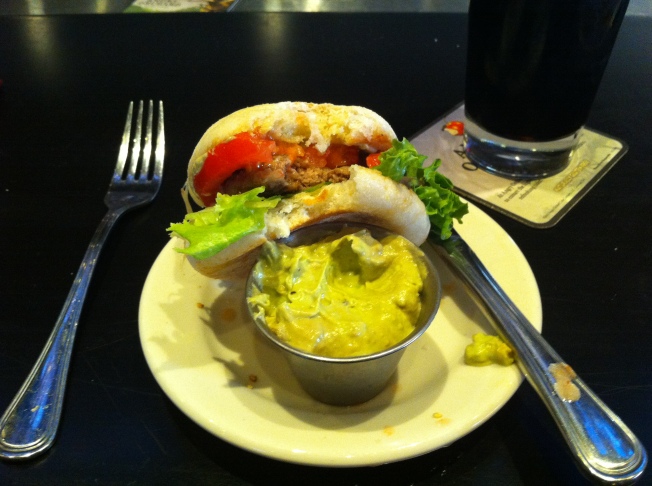 My BYO: Junior Jones on a Homemade English Muffin with Gruyere, Tomato, and Avocodo Mayo

I have no idea why I’ve ordered this avocado mayo so many times. I always think that I’ll like it because I love avocado and I loved flavored mayos. But each time, I find out that it has no flavor! I need to stop ordering it until they SEASON IT ALREADY! 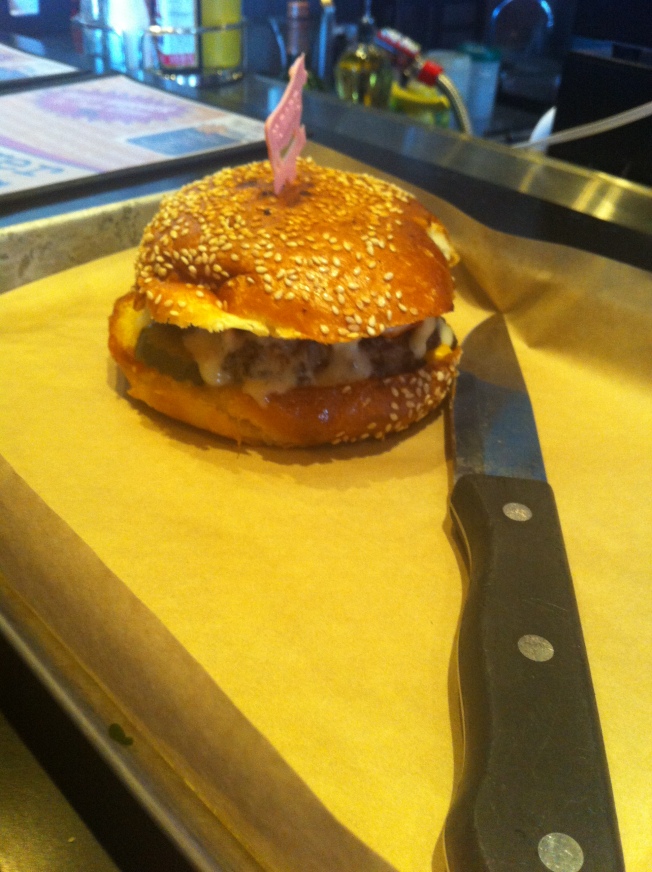 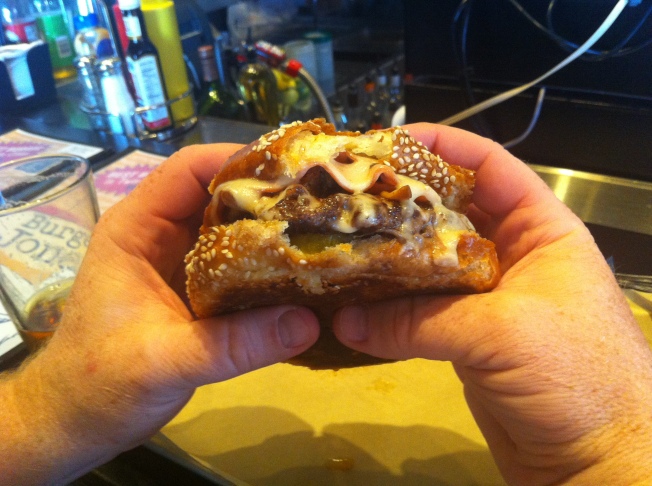 The French Fries {the regular ones} are probably one of our favorite items on the menu at Burger Jones. You order them as a side item. Rob and I split one order between the two of us and as much as we love them, we’ve still never finished them! 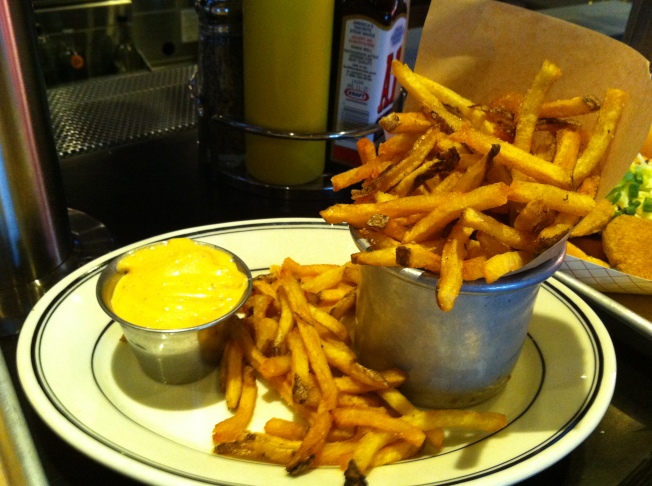 These fries are nearly perfect. We like to couple them with the Chipotle Aioli as our dipping sauce.

Another surprisingly yummy part of the Burger Jones menu is The Dog Park. Yes, that means hotdogs. They use Nathan’s famous all-beef hotdogs and can be ordered plain or with your traditional toppings. But I can get that at a ballpark. So let’s spice it up a bit! 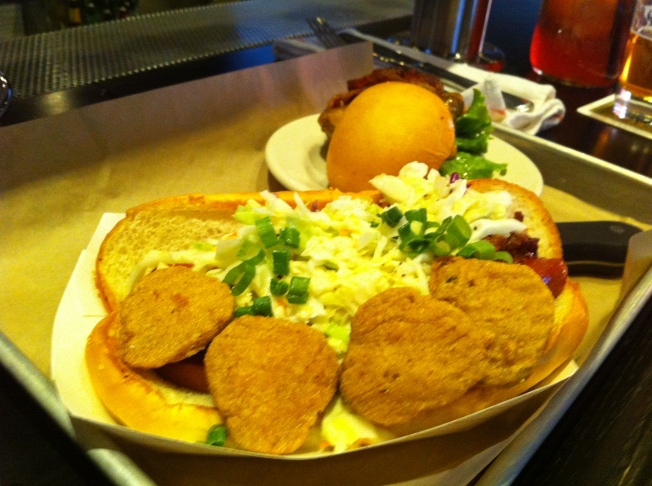 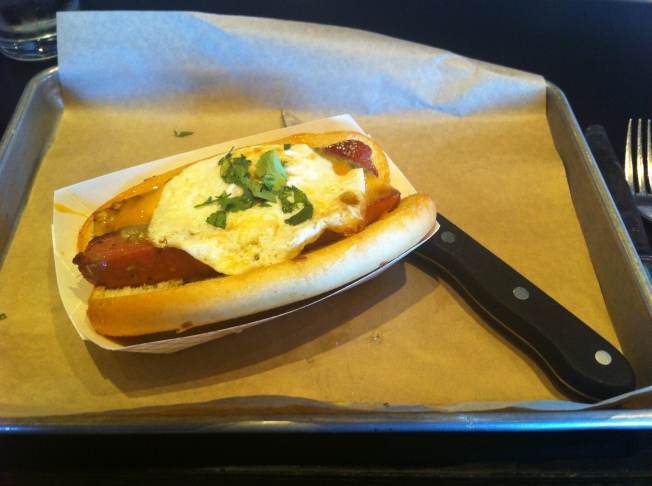 The Chihuahua – split, filled with cheddar and salsa verde, topped with a fried egg.

It’s so hard to be healthy when eating out at a joint like this! Sure, there are some salads on the menu. Okay, okay. I’ll order one next time and report back. But then I’ll have to call it Salad Jones.

The last thing we love about this place is that it is dog-friendly. There is an outdoor patio that allows dogs. Before the patio closes for the season, I’d love to get Sophie Jean out there!

What kind of burger is your favorite?