This weekend was a weekend of birthdays!

My friend Jen was celebrating hers, but was gracious enough to let me commandeer her special day in order to throw my husband a surprise 40th birthday party! His birthday isn’t until Thanksgiving Day {not exactly the best day for a birthday for someone allergic to poultry}, but he had *requested* a surprise party.

I just laughed and told him I couldn’t throw him one since he asked for one! I’d have to wait to throw him one on his 42nd or something, when he’d actually be surprised.

Instead, I threw him an “Only 40 days until your 40th!” surprise party. This just happened to land on Jen’s birthday. So we had double reason to celebrate.

And he was surprised!

So you may be wondering when I’m finally going to recap our Ireland vacation. Well, here is the beginning…

Our travel package to Ireland included round trip airfare via Aer Lingus from Chicago to Dublin. Since Rob had never been to Chicago before, I suggested we go a day early and spend the night.

That day just so happened to be my birthday!

Our early morning flight got us in Chicago at about 8:30 am. For only $2.25 each, we took the “L” {elevated train} from O’Hare Airport into downtown Chicago and arrived in under an hour. A cab was estimated around $50-$60 whereas a shuttle clocked in at $26 a piece. Navigating the “L” was not only a lot less expensive, but very easy. Instead of changing lines to get to the closest stop to our hotel, we decided to get off the train. It was a lovely day for a 20-minute morning walk. And since we both packed light, it wasn’t too big of a deal.

On our walk in, I spotted a place called Pops for Champagne. I was giggly with delight. By the looks of it, I assumed this was a Champagne Bar. I made note of the location. Wouldn’t it be a great place for a pre-dinner birthday drink? While I do prefer red wine above all, I am quite fond of the bubbly. It’s hard to get Rob to share a bottle with me or even go to a place like this. So, it being my birthday, I knew this would be my best chance.

We dropped our luggage off at the hotel and ventured out into the city, walking to and strolling along Navy Pier. Then we stopped for some lunch at Gino’s East Pizzeria. 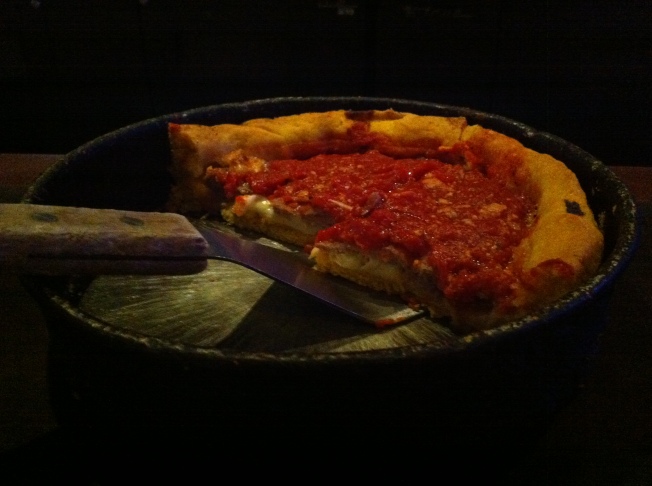 To my best recollection, this is the first time I tried pizza Chicago-style! Layered with the cheese on the bottom, then the toppings and sauce on the top, it’s not your typical pie. We choose this one because both Rob and I are fond of sausage. Furthermore, Duff Goldman, Celebrity Chef on the Food Network, raved over the sausage disk on this particular pizza on The Best Thing I Ever Ate.  So there was no other option, really.

The pizza takes about 45 minutes to make and the claim is that it is worth the wait.

Rob wasn’t a big fan of the crust and, of course, this Little Miss Wisconsin Girl thought it needed more cheese. I thought the sausage was a little bland, too. Yet it was cool to experience a true Chicago Deep Dish Pizza at a legendary pizza joint.

After lunch we happened upon Elephant & Castle Pub and decided to stop for a couple of pints. There were a lot of choices of English brews on tap that we don’t find back at home!

Fuller’s London Porter for me

We ended up chatting with the manager of the pub and learned he was from Ireland. After mentioning that we’d be making a trek to his homeland the following day, he made a list of his favorite pubs in Dublin for us!

What a way to start a trip!

After a few pints, we went back to the hotel to check-in and for a much needed cat-nap after the late-night packing, early morning flight and walking the city.

Rob and I have a birthday dinner tradition. I had solicited advice on where to dine in Chicago in this post and had a few places in mind. I mapped them out to make sure they were in walking distance or easily accessible by train. However, I did not set up reservations anywhere. I know that’s not the best idea for dinner out at a nice restaurant in Chicago.

What’s your favorite style of pizza?