After a day wandering Chicago, I was still contemplating what we were going to do for my birthday dinner.

I was most intrigued by a restaurant called Naha. I had found it somehow by clicking around online. It had also popped up in my inbox by Serious Eats as a restaurant with one of the “Best Burgers in Chicago”. Although it was my birthday, I still wanted to make sure there was something on the menu Rob could have and enjoy. I also read that Naha’s Chef Carrie Nahabedian was a James Beard Award Winner.

But what was most important was that there were so many things on the menu that I wanted to try!

Still, I had not set up reservations anywhere. I know that’s not the best idea for dinner out at a nice restaurant in Chicago. When this happens at home, our plan is usually to go to a restaurant right when it opens and snag a seat at the bar.

However, after our nap and a few birthday phone calls {one being from my dad indicating that he was going to visit us one weekend/aka come for Rob’s birthday surprise party}, we didn’t get out the door until probably 6:30.

And I still wanted to stop at that place I found on our trek to the hotel: Pops for Champagne. {Fitting for Wine Wednesday, don’t you think?} So we headed off in that direction.

I don’t think Rob was too happy when we walked in the door and they asked him to take off his hat. It was packed and there would be a wait if we wanted a table. However, I spotted the last two open seats at the bar.

We pulled up to the bar as Rob fixed his disheveled hair and perused the drink menu. While there are so many different Champagnes {oh gosh, I’m just giddy thinking about it!} on the list, I knew I couldn’t talk Rob into a bottle of bubbly before finding our dinner destination, so I suggested we order a couple of Champagne cocktails.

There were too many I wanted to try, but finally I settled. And do you think three weeks later I can remember what we tried? Must be a sign of old age. 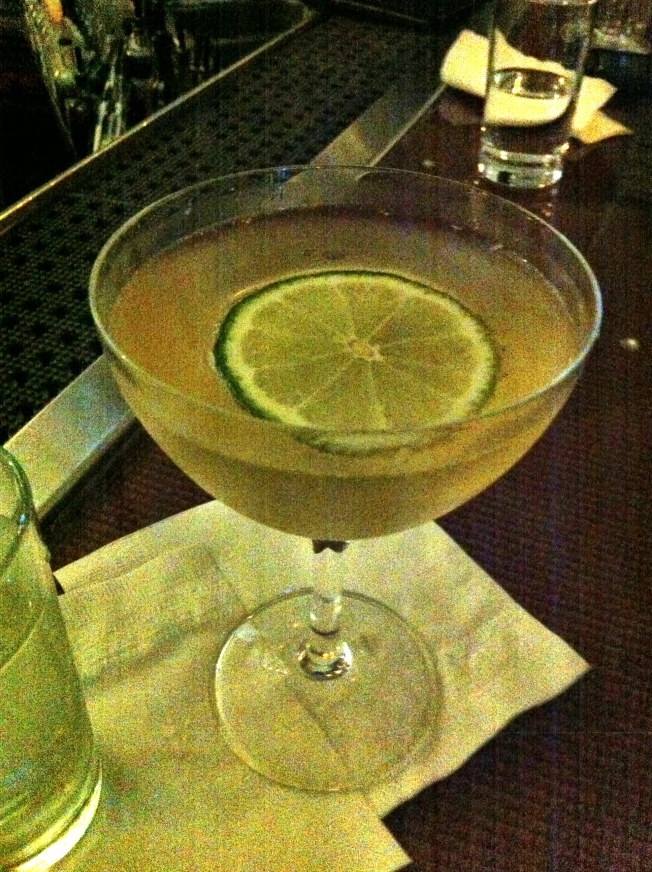 When asked if we’d like to peruse their menu, I said, “Why not?” Knowing Rob just wanted to get the hell out of the a place he had just exclaimed was “Probably the most expensive place in Chicago,” I knew that looking at the menu was just to pass the time while enjoying our cocktails. {Wine was $12 – $17 per glass, cocktails $10 – $14.} I knew we’d be dining elsewhere.

But instead, he asked me if I was interested in trying a Snack.

“Hmm… What are you thinking?” I said.

{I knew he had something in mind.}

Two things under the Snack Menu caught his eye:

I told him to go ahead and choose one. I know, I know, it was my birthday. I’m sure I’m that annoying girl who always says, “I don’t care. You pick.” Or at least it seems that way. Truth be told, if I *really* do care or have a preference, I will tell you! In those rare instances when I can make up my mind, I’m not too shy to let you know.

After much debate – okay, not really – Rob chose the fries.

One of the other reasons why we often sit at the bar for dinner is that we like to strike up a conversation with the bartender, if possible. However, after being served, the bartenders were too busy attending to the other people swigging Champagne patrons to linger and chat with us, which is completely understandable.

Then the fries arrived. And the heavens parted.

Frites of the Gods

They were beyond excellent, if that is possible.

Rob dubbed these the best fries he’s ever had. It was then that our bartender, I believe his name was Greg, came over and asked how they were.

Rob went on and on about the fries… that we were from Minnesota and that these were worth a plane ticket down to Chi-town. Greg started to tell us how the chef prepared the fries. They are all fresh cut and boiled before they are fried. He said that was the “secret” to them. For me, the fries stood well on their own, the truffle butter gave them great flavor. The fancy sauces on the side were just an afterthought, that maybe even cluttered the dish with too many flavors. I tried each one, but then left them alone.

Greg asked where we were planning on dining that night and when we mentioned that we didn’t have reservations, but were considering Naha. He said, “Oh, we know those guys there! We love that place. You’ll really enjoy it.”

When Greg gave us our bill, he came back and said, “Don’t leave just yet. Our manager knows the owner over there. He’s making a call to get you hooked up.”

In retrospect, I keep thinking of these things:

Wow. This blows Minnesota Nice out of the water!

Within minutes, the Manager of Pops for Champagne came over and introduced himself. He gave us his card and said how wonderful a place Naha was. In fact, he had just dined there the previous night and spent $200 on himself alone because he kept ordering dozens of oysters. {This might scare some people away, but I had a look at the menu and the prices seemed reasonable for a nice restaurant in a big city. I wasn’t planning on ordering dozens of oysters and expensive Champagne anyway.}

Then he said that he contacted Naha and the owner, Michael, was going to be expecting us. He talked with us a while and I just kept thinking… “Wow! We’re getting into a restaurant with a James Beard-Award-Winning Chef without reservations and the menu looks amazing.”  We no longer had to think about nor worry what we were going to do for dinner.

Come back tomorrow to hear about our dinner!