What was I thinking?!

Running my first ever 5-mile race just one and a half weeks after coming back from a two-week vacation where I got no exercise whatsoever?

What’s more is I started to come down with a cold just a few days prior. Day one started with a sore throat. Day two was a stuffy head. Day three began the draining.

I did everything I could to rid myself of it.

I got lots of sleep.

I drank more fluids than I have in a long time.

I sipped tea constantly {even more than I did in Ireland.}

I even tried Kat’s Therapy Tea and Katie’s tea concoction.

I slowly got better. And although I wasn’t 100% on race day, I still participated and finished. Here’s my recap for you.

We hosted our monthly poker tournament on Friday. I knew it was going to be a later night, but also knew that the distraction the night before the race would be good. We met up for Happy Hour at the Burnsville Ale House and I devoured some Meatloaf Sliders. I know. They didn’t sound appealing to me either until a friend highly recommended them once. They are a flavorful world of heartiness. {That one’s for you, Rob!} I considered a beer, but with my cold and all, I decided to hold off.

It was a fun night of poker, friends and a lot of laughter. I had more peanut butter pretzel sandwich thingies than I’d care to admit. But that’s sort of the job of the host, right? We need to show appreciation for any dishes the guests brought.

The last people left right around midnight, which is about what I expected. I completed my usual night before race ritual with a hot shower and lavender oil application before bed.

I awoke on Race Day still feeling the effects of the cold, but not quite as bad as earlier in the week. I made myself my Magic Smoothie and got ready for the day.

I didn’t consume my usual breakfast because I was out of bread, but I thought a full-size smoothie {double the size of what I normally make here} would do the trick. I also sipped a cup of my all-time favorite tea: 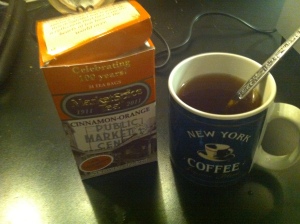 We stopped for coffee on the way. We were anticipating a drive just under an hour. The race was at an apple orchard near White Bear Lake, MN. I would not only be doing my first 5-mile race, but also my first trail run! This was my opportunity to run through pumpkin patches, strawberry fields and apple orchards. When I was picking out races to run this fall, I sent a bunch of links to my husband. When he saw the Run for the Apples race, he responded back:

Of course, I was a bit nervous. Not only was it my first ever 5-mile race. {I had only run five miles twice prior and they were very difficult runs}, but I was overcoming a cold. So instead of trying to push myself or be too hard on myself, I set some more realistic goals and expectations:

It was a chilly morning, with lots of fog on our drive to the orchard. When we got out of the car, it was only 38 degrees. I was wearing a light jacket over my three-quarter sleeve shirt, but I hadn’t intended on wearing it during the race. When I saw what the other runners were wearing, I changed my mind and put my number on the outside of my jacket!

At the starting line, I had a really hard time hearing the announcements that I finally just put in my earbuds and waited for people to move. I’m not sure where the starting line actually began and how the chip timing was going to work. There was no real starting mark or mat of any kind that I could tell.

I ran a really easy, slow-going first mile. I kept telling myself it was a warm-up. I didn’t want to start out too fast or have trouble breathing because of my cold. I broke away from the crowd {or rather, the crowd broke away from me}, and I was basically alone. Alone in a tranquil setting, jogging along to jigs and reels on my Gaelic Storm station on Pandora Radio.

My eyes were probably busier than my feet. I wanted to look around at the precious scenery. Seeing those pumpkin patches made me realize I hadn’t been to one since I was a kid. The dried golden cornstalks seemed to be basking in the sunlight. However, I looked down often on the trail because I didn’t want to trip on any rock protruding from the uneven ground. I am very clumsy. Rob calls me his Nimble Princess.

But when I came to the first mile marker, there was a mat with a time clock.

What?! My average mile is 12:30 to 13 minutes. I knew I was running slowly, but really? And why was there a clock there? Is this where they decided to start recording the chip times? Or was it just for splits? When did they start the clock?

I will never know because my name is not on the race results.

I don’t know why.

Right after mile one, we came around a bend and Rob took a picture as I passed by:

Then we made it up a very steep hill. This was more of a hill than I’ve come across in a race. In fact, everyone I could see in front of me was walking up the hill.

It was an even slower run up the hill than what I was running previously, but I didn’t stop to walk. I was going to make my goal of running the entire thing!

Upon completion of Mile Two, I was starting to get really warm. I wanted to rid myself of my jacket, but I had pinned my number to the front. This wasn’t possible, so I just tried to forget about it. I occupied myself by taking in the scenery and counting the number of people I passed. I knew that this number didn’t really mean anything because the run-walkers would eventually pass me anyway, but it passed the time.

By Mile Three, I was feeling pretty good and by the 5k marker I looked at my watch and found that I was at least five minutes slower than my usual 5k. Yikes! I knew I could push it further. And not because of the time, but because of how I was feeling. I had been taking it easy. I picked up the pace a bit. It helped when a woman who was walking tried to pass me while I was running. That lit a little bit of a fire under me. I wasn’t about to let that happen!

By Mile Four, I gave myself a time I wanted to beat. I knew it wasn’t a good time for the race, but it would give me a goal for my last mile. I’m all about mind games when I’m running.

And you know what?

I felt really great when I finished!

Just before the finish line…

I ran the whole thing and I didn’t feel like it was “too hard” like I’ve been feeling with my past couple 5ks.

I think there are a few reasons for this:

There is good and bad to this. It was my first race and I had a cold. I didn’t overdo it and it felt great. But on the other hand, I didn’t really push myself. Maybe I should be working a little harder. In the end, it doesn’t really matter for this race. The run felt great. My unofficial time was:

{Unofficial from my hrm; my chip time was not recorded.}

Not good by any means, but it’s a place to start.

I ran for these apples: Haralson Apple and a cup of cider

After the race, we wandered into the garage to do a little shopping. We came home with these purchases:

Honey {I was getting low after all that tea!}, Caramel Apples {best ever!}, Old Fashioned Apple Cider, Apple Syrup {we have yet to try!}

What are your tried and true cold remedies?