Last night we went to a concert at the 400 Bar in Minneapolis. If you haven’t heard of Shovels and Rope, you need to check them out! We’ve been listening to their music ever since we heard them on 89.3 The Current. I was more excited to go to this concert than I have been to see one in a long time! They didn’t disappoint.

In any case, a friend of ours recommended that we have a couple of drinks and/or dinner at the Acadia Cafe beforehand. It’s just kitty-corner from the 400 bar, so we could park once and walk over.

No Crap on Tap!

As a beer snob, this appeals to me. 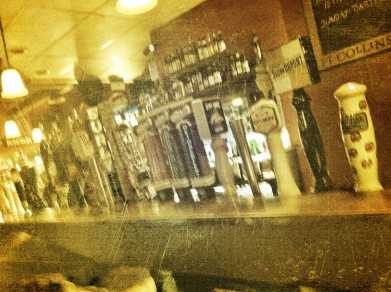 The tap beers include a nice selection of local (Home), other domestic (Away) and international (Far Away) craft and unique brews. There’s even a cask ale. At least one of us will order the cask if there is ever one on tap! Of course, these taps change, so they keep them handily listed on the chalkboard on the wall:

The have a large selection of bottled beers, too.

We ordered a round of Pumpking Ales by Southern Tier, because it is one of those beers that when you find it on tap, You Must Have It. Our local liquor store sold out of it by the bottle well before mid-October. So this was a treat.

For food, we started with the cheese curds. Rob likes to order these whenever they are on the menu anywhere. Then he likes to give them a thumbs up or thumbs down. {Also know as “MMM!!” or “meh”.}

Cheese Curds – “Beer-battered in our very own kitchen with fresh tap beer and secret spices!” $5.75

They were pretty good! I liked the “spices”, but couldn’t quite place what they were. No matter. I wouldn’t be screaming, “Season It Already!” here.

The Acadia Grilled Cheese – “A yummy combo of garlic and cheese. We spread our house-made aioli on toasted multi-grain and melt three cheeses – cheddar, Swiss & parmesan – with fresh tomato.” $6.35  or add bacon for $1.

As for the fries? They are described as “soaked in a vinegary bath overnight”. But really, they just tasted overcooked. Rob said they may have made his Top 10 Worst Fries list, which I didn’t even know existed. Then he went on to finish off the cheese curds. 😉

GLBT  – “Just a little twist on your straight BLT. This comes with our house-made guacomole.” $7.40

I love the clever name of this sandwich! But that isn’t what made me order it. It was The Guac. And I was underwhelmed. I could barely taste it… until I took the sandwich apart and took a bite of just the bread. The multi-grain sandwich bread they use here is pretty good, though. The side salad I ordered instead of fries wasn’t a show-stopper, but better than your average iceberg lettuce salad.

Overall, I would say that the food was good. Nothing mind-blowing, but worth it if you are coming in for the beer. {Yes, we sampled more than just one!}

What I loved about the ambiance of this place was that it really reminded me of an artsy café, where you’d get a cup of coffee. It was a little dark inside and the clientele was a bit alternative and eclectic. I like that. I also like the fact that unlike many bars that serve this number of tap beers is that there are NO TVs! Sure, as a Packer fan, it’s obvious that I do like watching sports from time to time. However, sometimes I’d just like a little conversation when I’m out with my husband. Sometimes, I’d rather he not be staring at a TV screen all night, ya know?

Acadia Cafe has it’s own line-up of live music and DJs as well as nightly specials. For example, right now Mondays are 2-for-1 bottles of beer or half-priced bottle of wine night.

We will be back… to try different food, to sample more craft brews and to enjoy the ambience.

What’s more, is when we crossed the street to the 400 Bar, we expected to encounter CRAP ON TAP. But such was not the case. They had a few good brews over there, too. Not too shabby of a night if you ask me!

Do you have a favorite neighborhood café? If so, what makes it unique?