All I remember is that I ordered the Nori Encrusted Sirloin with Ponzu and my husband ordered the Bacon, Egg & Harrisa Sandwich. And while we were both pleased, we weren’t blown away like some say that they are when dining here.

I do, however, remember Rob craning his neck to follow a burger that was being delivered to a table across the restaurant. While staring in that direction, he vowed that we would be back.

For his birthday dinner this year, he chose 112 Eatery with every intention of finally trying the 112 Cheese Burger.

We made early reservations as we had planned our night out around the Ike Reilly Thanksgiving Eve 10th Anniversary Celebration. Our friend Jen joined us. {If you haven’t heard of the Ike Reilly Assassination, be sure to check them out!}

I ordered a glass of French bubbly: Bouvet-Ladubay Brut; Jen went with a Sammy Smith’s Oatmeal Stout; while Rob was seduced by the fact that they had San Pellegrino beverages on the menu. He went with the Pompelmo flavor {grapefruit}. His favorite flavor is Blood Orange, but we haven’t seen that since Chicago.

While we waited for our beverages and perused the menu, some pre-dinner snacks were brought to our table:

This reminded me very much of France because at parties, you often see nuts and olives served with an apéritifs.

Rob already knew that he wanted a burger, but I was a little perplexed on what to get. I asked for recommendations and favorites. The menu was even a little too “foodie” for me, but sometimes we can be turned off by an entrée just because of the name. The 112 menu doesn’t give much for descriptions, but I will tell you that our server did an excellent job once I asked! It helped me make my decision.

Oh dear, was this sinfully delicious. The bread was toasted. The ricotta was whipped and creamy and the sweetness of the honey with the hint of earthiness of the truffle flavor balanced beautifully.

I chose another appetizer as my entrée:

I probably would not have ordered these with that description alone. However, the way our server described them sold me. And by now, you know how much I love scallops. These were decadent, perfectly seared, and if you like mushrooms, these will make you swoon. There’s a lot of umami going on here! However, as I kept eating, it eventually became too much, almost too salty. Maybe just one scallop would have been perfect. Now I know why it’s an appetizer, perhaps meant to share.

For the table, we ordered some sides: 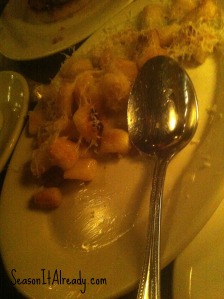 The sides here are meant to be shared and while we did order two sides, we couldn’t finish either of them among the three of us! This gnocchi was just the way I like it. I think gnocchi is always the best the next day, when you sear it so that it has a nice crust. These had just that along with those yummy shavings of parmesan reggiano. Perfect.

Of course, to go with the burger, we had to get a side of fries:

Again, a huge portion! Luckily, the fries were the kind Rob likes – the perfect ratio of potato to fried surface {read: skinny fries}. And while they were no Pops fries, they did the trick. However, the ketchup and almost-too-tangy mayo-like dipping sauces didn’t thrill us.

Both Rob and Jen ordered burgers:

So there is no real description on the menu about this burger, but Rob has been hearing about it for years! The meat sits on an English muffin and is topped with brie cheese. Rob said that the brie overpowered the entire burger. He was a little thrown off, too, because he looked at the menu online prior to dining out and there was a picture of the 112 burger. By the looks of it, the 112 burger had cheddar, or at least some sort of orange cheese!

It’s not that he doesn’t like brie cheese. In fact, one of his top 10 burgers in the Twin Cities is a truffle burger with brie that also sits on an English Muffin. But he didn’t come for that burger. And this one didn’t compare. The meat was high quality though, and he ate most of it. But I was sad that his birthday dinner choice was a bit of a let down.

But something made up for everything: 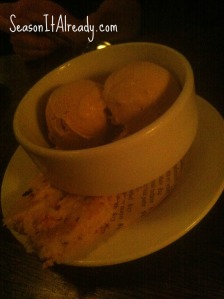 We first discovered Izzy’s Ice Cream at Scusi in St. Paul. We fell in love. So much that, one of the items I put in Rob’s birthday box was a “coupon” for a trip to Izzy’s.  I had no idea that we’d be having some of Izzy’s ice cream the night before he opened his gifts!

Both Jen and Rob ordered the salted caramel ice cream, so I elected to get something different:

This cake was quite yummy and caramel-y, but when I had a bite of the oh-so-decadent salted caramel ice cream, I was entirely jealous. Both Rob and Jen tasted my cake and were happy with their choice. Jen said that if we had just ordered the caramel cake to split, we would have enjoyed it just fine. However, after trying the salted caramel ice cream, it just didn’t compare! And there was so much going on with caramel-y sweetness in the cake and on the side, that I couldn’t tell if the whipped cream was of a dulce de leche flavor or not.

With our tummies full, we asked for the check and were also brought this:

We were too full to take more than a taste. For flavors, I got cayenne and cardamom. Jen said she didn’t understand who would like a combination like this! While I didn’t mind it, I just couldn’t eat anymore at this point. But I love the thought of a complimentary post-dinner treat!

What’s a flavor combination that you’ve been surprised by?