After our lunch at Kitchen, our room was ready at The Pelican. We went back to get situated and take a nap before checking out the beach and heading out to dinner later that evening.

We found The Pelican on a whim. When we learned we going on this cruise, I knew I wanted to stay in Miami for night since we had never been. However, knowing that I didn’t want to rent a car, I got recommendations from friends to stay right on Miami Beach so that we’d be in walking distance of things to do.

The lesser expensive hotels were going for $300+ for just one night. To me, that is CRAZY! So I checked out Hotwire and found a boutique hotel on Miami Beach with great ratings and snatched it up. After all was said and done, we paid $182, including all taxes. While that is still more than we ever tend to spend, I thought it was reasonable for what we wanted to do.

And the hotel was fantastic. It was quirky and eclectic. Each room has different theme and decor. And the hotel’s location put us just across the street from the beach! When we checked in, the gal told us that when we got to the room, we would find a fridge with a big bottle of water and a bottle of sparkling water – these were complimentary. “But here’s the best part…” she said. “There is a free Happy Hour for guests from 4pm to 6pm. Just come down to the bar and show your key card!” Wha… What?

Truthfully, after the lunch we had, I really didn’t need any more alcohol. In fact, while Rob napped, I somehow got a second wind. Still, by 4:30, we were down at the bar ready to mingle and have some drinks. But we were the only people at the bar. There were plenty of people dining out on the patio… but we were the only one taking advantage of Happy Hour! 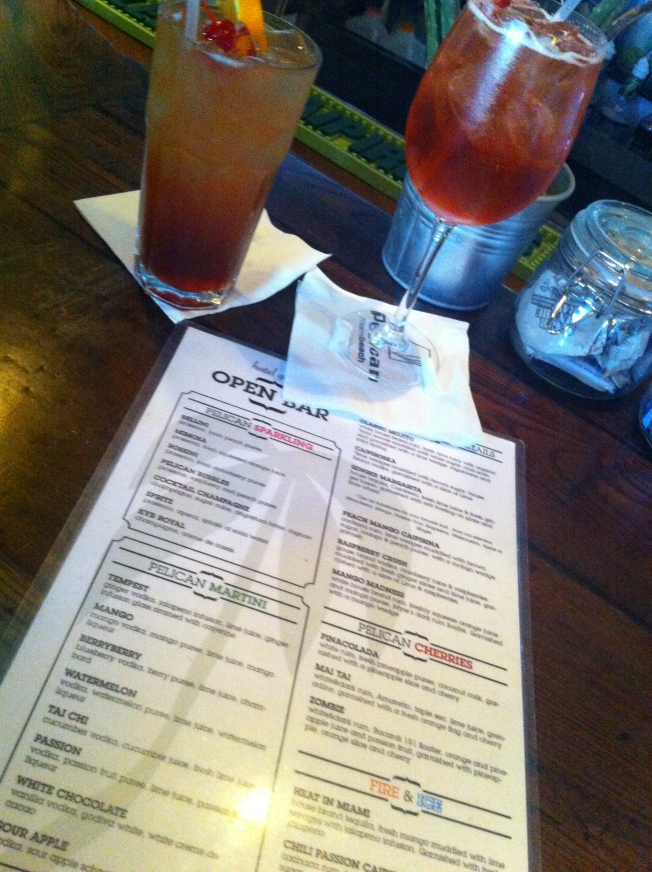 And just like our experience at Kitchen, these drinks weren’t weak either! We were expecting some watered down gin and tonics or Captain and Cokes, or a couple of glasses of house wine. But this wasn’t the case. They were all specialty drinks. And they were not only unique and tasty, but also strong! 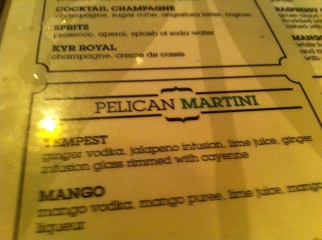 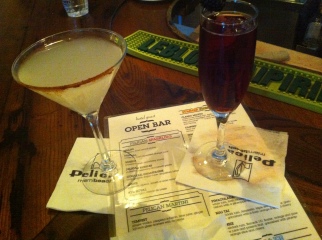 We each had only two drinks. But it was more than enough. On our way to dinner, we stopped to check out the beach before the sun set completely. 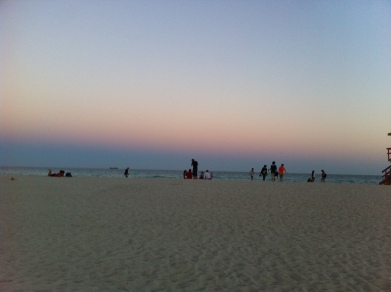 It was the perfect hotel in terms of character, location and price for us. Their restaurant menu looked phenomenal, too. I just knew that the Caprese Omelette would be right up my alley.

I tried, oh how I tried, but I couldn’t get out of bed that next morning. I had had way too much to drink! It was another beautiful day on Miami Beach and I was spending it in the hotel. Ugh. By 10am, I got up and showered, but I had to go back to bed for a bit. It wasn’t until noon (check-out time) that I made it out the door. I am not proud. I wanted to see so  much more of Miami. At this point, it was lunch time, but I still wasn’t sure I was ready to stomach any food.

Rob was on a mission to go back to Ktichen for the the best Carbonara he’s ever had. How could I argue? He had spent the last four hours sitting in the hotel room while I nursed my hangover instead of enjoying the beautiful Miami weather. Besides, as much as I wanted to try the food at The Pelican, I wasn’t sure I what I could keep down just yet. I told him that it was up to him if he wanted to return to Kitchen. We just needed to be back around 1pm so that we could catch a cab to the cruise port.

Of course, Miami’s ceviche was something else I really wanted to try while we were there. But this wasn’t the time to put that in my stomach. Instead, I went with the chicken quesadillas. 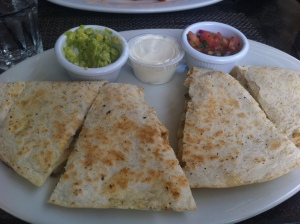 Doesn’t it look like someone took a little swipe out of my guacamole? This photo was taken before I even touched it. 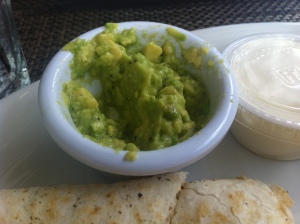 The flavors in the dish were excellent. I mean, they were quesadillas, so it’s rare that they could be done wrong. Still, the ratio of ingredients in these quesadillas was perfect and they were well seasoned. In fact, I noticed that there were only salt shakers on all the tables in the restaurant. No shakers for pepper were to be seen. Maybe that’s because everything is seasoned with pepper? Look closely at the guacamole above and the chicken in my quesadillas below. See the specks of pepper? 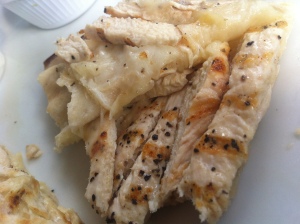 The only reason I was picking at this dish {I only ate on piece of this quesadilla} was that I wasn’t quite ready to get the food down. I took little bites as I sipped water.

And though we came back to Kitchen for Rob’s best Carbonara ever, at the last moment, he ordered the: 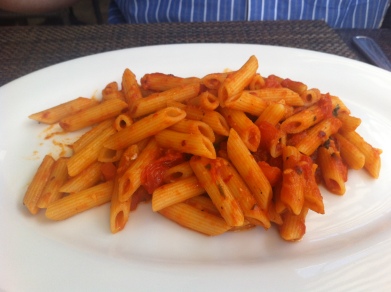 The Verdict? It was very, very good. However Rob still regretted that he did not order the Best Carbonara Ever. He wondered why he suddenly got the urge to try something new. Still the pasta was cooked perfectly al dente and the spice was very nice.

And while I sipped on my water, Rob was ready for a pre-cruise cocktail. Although both of decided that we never needed a $45 drink experience again, he ordered a medium-sized pineapple concoction. 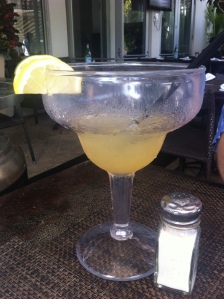 A medium drink at Kitchen. Again, use the salt shaker for size reference.

The medium was still $30. And it was also buy-one-get-one free. He had to get his free one to-go.

Our twenty-four hours in Miami were sun and fun-filled, but also full of alcohol and good food. I now know to lay off the booze and enjoy the food and the weather the next time we visit. There is so much more to see, too. So there are plenty of reasons to return.

What is the best hotel you’ve ever stayed in and in what city?

P.S. For the record, Rob ordered a late night pizza at The Pelican and said it was excellent. I got stuck with the crusts. 😉