Did you know that National Beverage (containing alcohol) of the United States of America is Bourbon? Yes, Bourbon. We learned this on the Beer Trolley Tour we took in December. We were told that “They” are trying to get this changed to craft beer. There are more craft beer varieties and breweries in the U.S. than anywhere else in the world!

And guess what? Next week is… 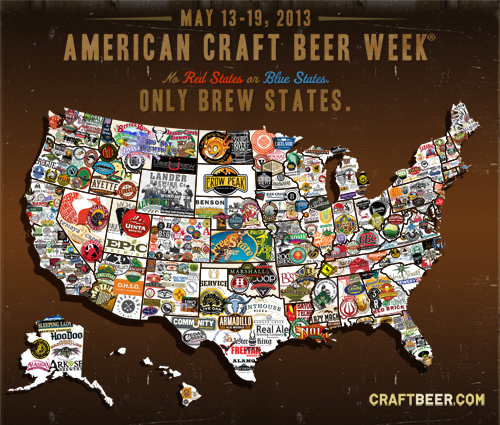 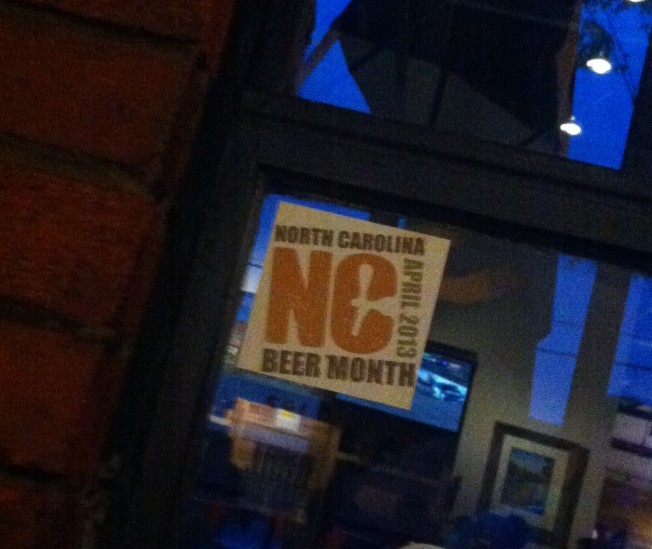 And, boy, did we celebrate! Tay and Brendan took us on a tour of the city’s breweries. I never knew that North Carolina was such a brew-happy state! First, we sampled some great local beers while dining out… First at Mac’s Speed Shop, then at Mellow Mushroom. {Not to mention the beer we stocked up on for back at the house!} The Mellow Mushroom Beer Menu stated,“North Carolina boasts more craft breweries than any state in the American South.”

Let us compare with some of those other southern states, shall we? 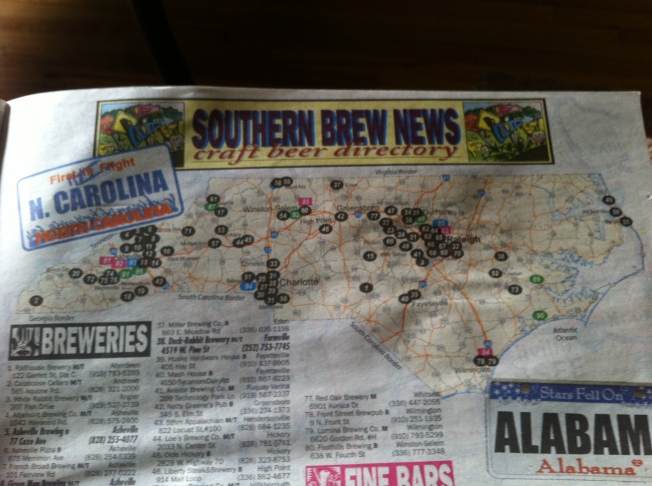 Each numbered black dot represents a brewery! It looks like there are at least 80! 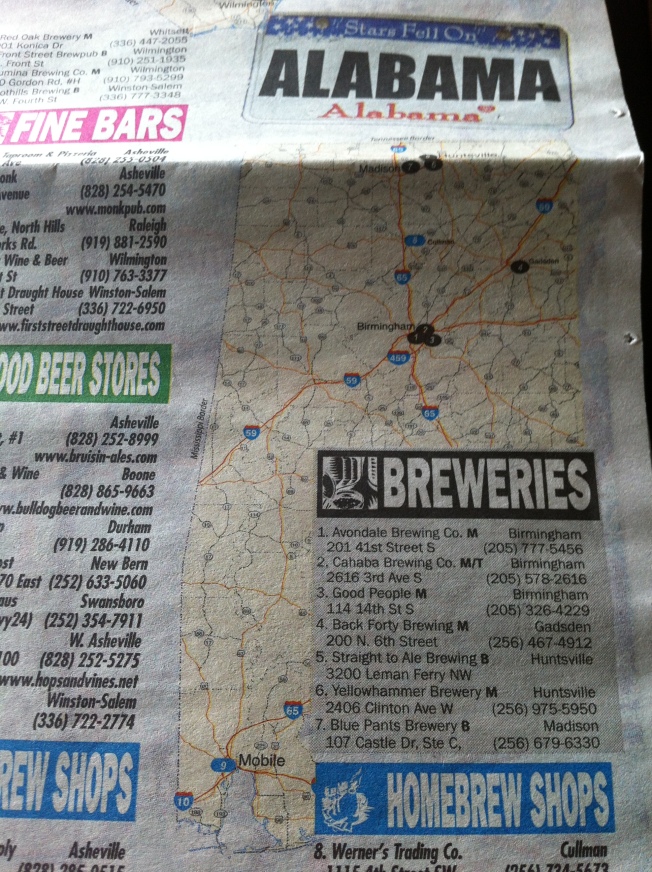 Not quite as many, you think?

Even Tennessee and South Carolina have considerably less: 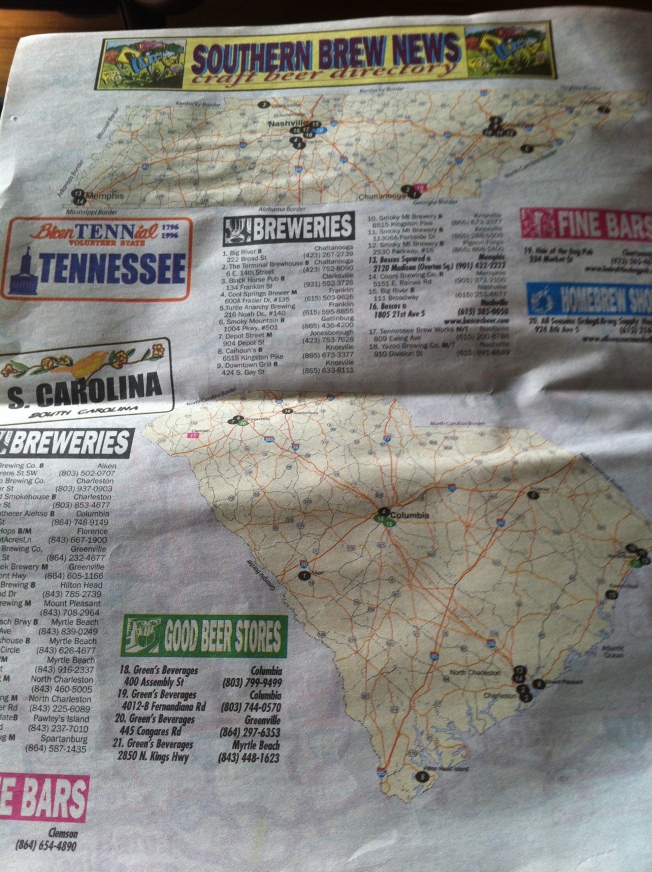 Quite a difference, don’t you think?

Hooray for North Carolina! While breweries are popping up quickly everywhere across the country, it seems North Carolina breweries do really have their mark on the map. We had the opportunity to stop at five of them!

Our first brewery stop was on our second night in Charlotte after dining (and consuming a few beers) at Mellow Mushroom. 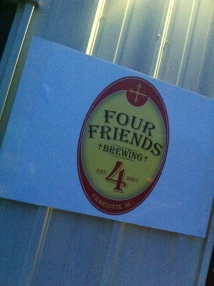 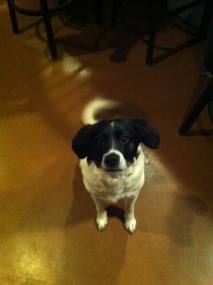 This taproom reminded me of the ones that we have visited in Minnesota… Kind of off the beaten path, nothing too fancy, just a garage opened up for tasting. The dog above was just one of the dogs we saw, met and petted. Most of the breweries we visited were very dog friendly. We LOVE this!

At Four Friends Brewery, I had my first Jalapeño Beer! 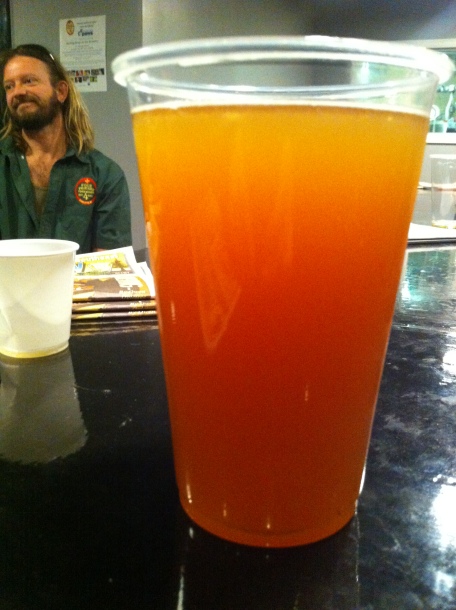 Nothing else looked interesting to me that night, so I almost just ordered a glass. Everyone warned me that I should sample it first. I loved it! And I did order a glass. {…With one of the brewers in the background, tee hee!} Some said that the jalapeno was a little too much for them, but I found it very well balanced. If you’ve ever read my posts on cooking like a Homesick Texan, you’ll know that I like heat in terms of spice, not necessary overbearingly-hot. And this is exactly what this beer offered. Plus, I had never had a jalapeno beer before… Why not try my first one in North Carolina, of all places!?

Rob says that this place was the least commercialized of the ones we visited and felt more like you were stopping at a friend’s place, who just happened to have a back warehouse where he made beer. 😉

The next night, we continued our beer tasting tour of Charlotte… 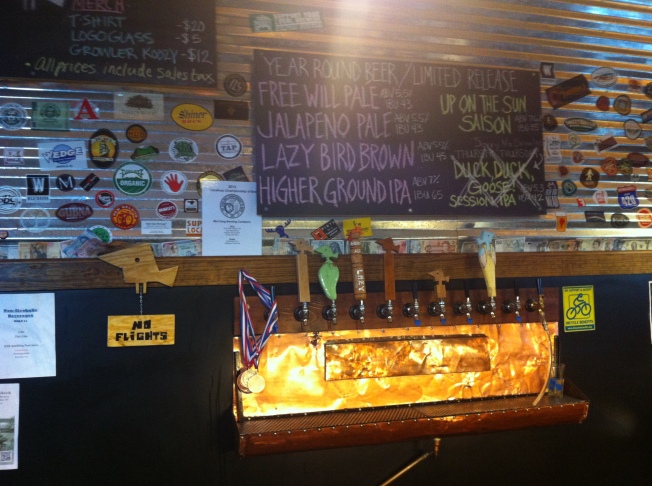 I like the bird logo. Can you point it out?

Birdsong Brewing is located in the NoDa (North Davidson Street) area of Charlotte. The nice back deck was crowded with folks sipping brews. Inside, we pulled up seats to the tasting bar and listened to some music by a guy strumming a guitar with Eddie Veddar’s voice. I found the ambiance quite relaxing, something people might not associate with a taproom or brewery.

But look again closely at the photo above… They had a Jalapeno Beer, here, too! Why hadn’t I been introduced to these before Charlotte? However, here, I went with the Lazy Bird Brown. I just wanted something different from the IPAs, porters and stouts I’d been enjoying as of late.

Look at the photo above for a third time. I wondered why a brewery wouldn’t offer flights (small pours of samples of some/all of their current beers). It seemed a little strange to me. However, before I emptied my glass, the bartender flipped the sign over to read “flights.” My guess? They were out of sample glasses! Once washed, they can offer them again.

With our glasses empty, we had no problem sauntering over to the next brewery, as it was right next door!

Appropriately named, considering it is located in Charlotte’s historic arts district of the same name, no? 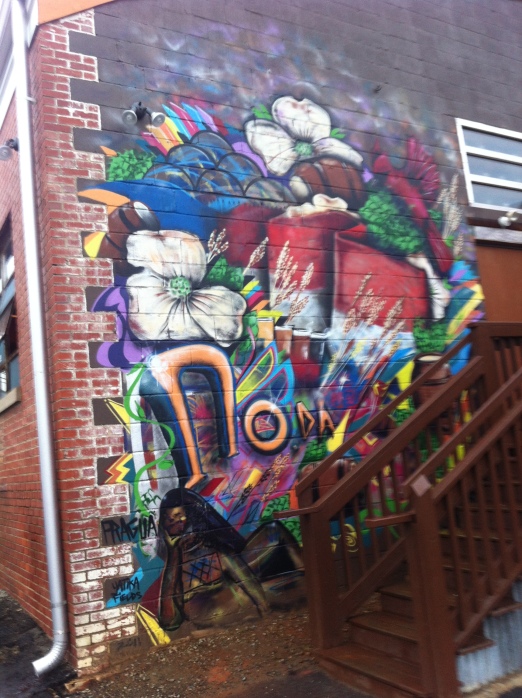 This place was packed! We threaded our way through the crowd to the bar to find this overwhelming beer menu! 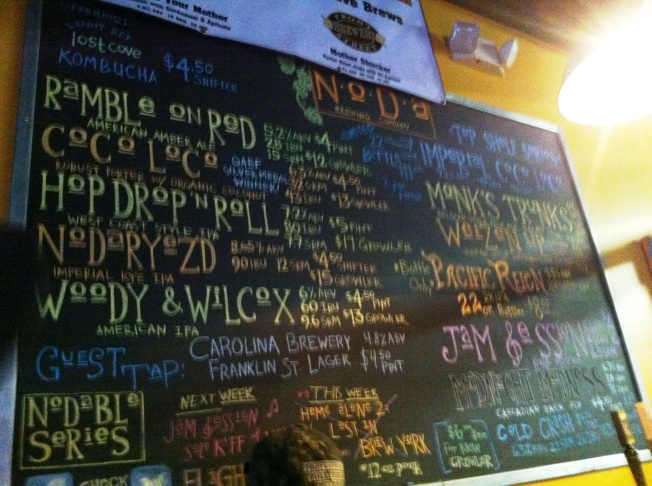 Beers on Tap? Beers in the bottle? Kombucha? Guest taps? Where to begin! Eventually, I chose the CoCo LoCo, a porter made with organic coconut. While I would never turn it down, there’s something a bit better about the Kona Brewing Company Koko Brown I had in Hawaii. Maybe it’s just location, but coconut does really take me back to Hawaii, not usually North Carolina! {On another note, the Koko Brown has proven to be a somewhat lucky poker beer for me since I’ve found it on tap and in bottles in Eagan!}

We spent much of the time outdoors, although it had just rained, sipping our brews in the cool air away from the crowds: 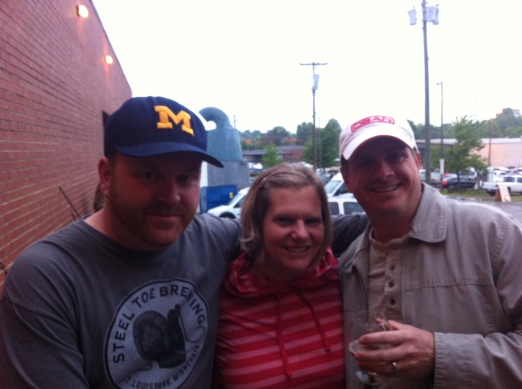 Rob and our lovely hosts Tay and Brendan

We hopped in the car to make the five-mile trek to hit the last brewery (of the night). 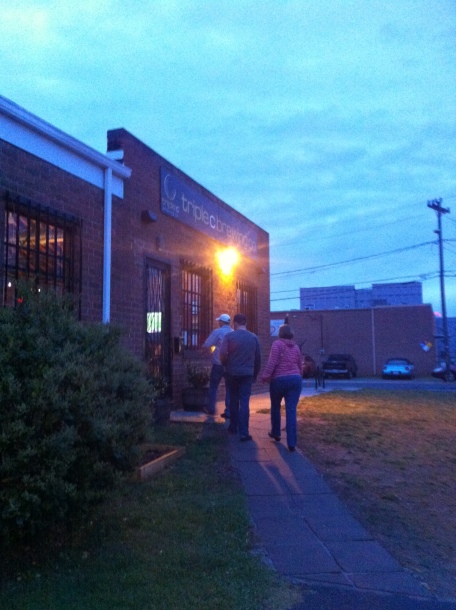 Sure, it looks like the night is just beginning as we make our way to the door. However breweries and taprooms in Charlotte generally close at 8 or 9pm. I think this is a good thing. Most don’t serve food. And people need food before and/or after consuming a few too many beers.

The first thing I noticed at Triple C was the TV screen connected to their beer menu: 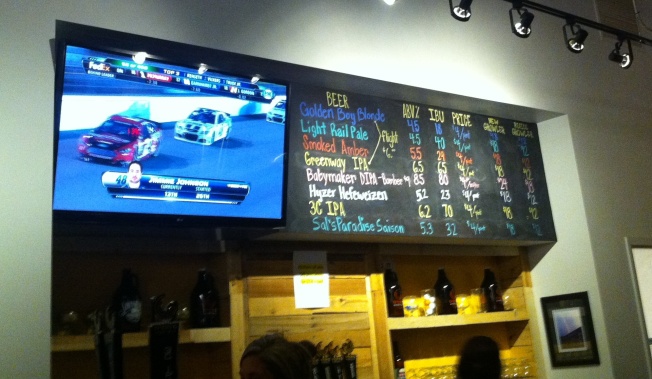 Since Charlotte is the home of NASCAR, it’s only natural that they’d be televising races right next to the beer menu! Since there were two IPAs on tap, Rob and I decided to order one of each for comparison. 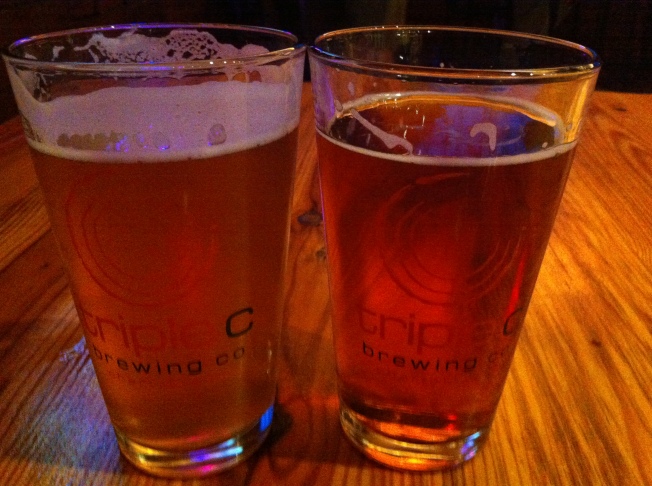 You can’t tell because of the color of the table behind them, but these two IPAs were very different in color. Which one did I like better? I have no idea. We were having too much fun… listening to this band {which happened to include an old friend Brendan hadn’t seen in a while!} and sitting at this long table…. 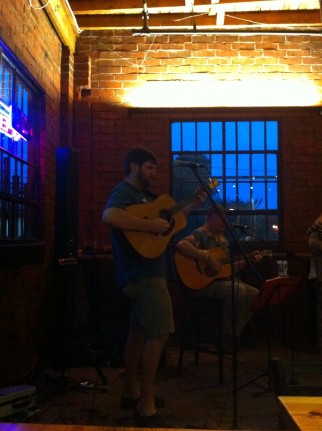 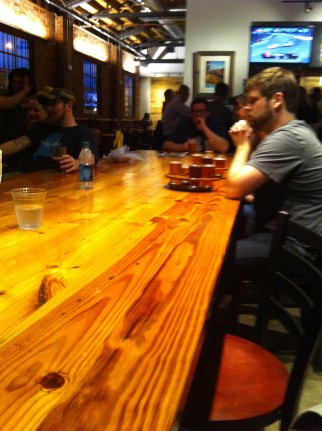 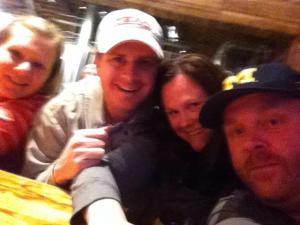 … And taking blurry, cheesy photos of ourselves!

We did do just one more brewery… but for brunch the following day. Come back tomorrow to read about our Heist Brewery Brunch!

All I can say is that after this fun beer tour, Rob and I think we are ready to do this one in The Cities. Well… almost.

What is your favorite local brewery and why?