Yeah, it’s been a while since I’ve written a local Restaurant Impression. Crap. I’ve dined so many places I’ve wanted to tell you about in hopes that if you are in the Twin Cities, you’ll visit. And if you aren’t, you’ll be inspired to make similar dishes!

And since it’s American Craft Beer Week, I thought I’d tell you about a place known for beer that we’ve been to a few times… Oh, Crap… Last fall and winter. Yeah, it’s been that long.

Although, winter didn’t end here until a couple of weeks ago this year… Do I get a pass? Pretty please?

The first time we went to Pig & Fiddle, we were invited by our friends Wendy and Tracy:

Was this really last fall? It couldn’t have been. I was wearing short sleeves and I’m a FREEZE BABY!

More importantly, check out that chalkboard behind me. That is the constantly changing beer list! They have a wide array of taps. Here is a shot from our second visit to Pig & Fiddle when we sat at the bar:

Yes! You see Steel Toe Dissent on that list! That is where we discovered it. Steel Toe describes it as a Dark Ale, but we thought it was more like a Stout. {We learned on our Beer Trolley Tour, that that has something to do with rights and trademarks.} Yeah, now just count those taps of craft brews!

But back to our first visit with Wendy and Tracy. That night, Wendy and I opted for a bottle of wine. I KNOW! Pig & Fiddle is known for its beer, and we got wine. But it was soooo good. I love me a good, big, bold Zinfandel and that is exactly what we got: 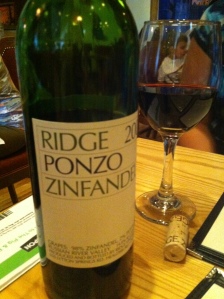 Who knew that a restaurant with an emphasis placed so heavily on beer, would have a decent wine list as well? As for the food, the description of this establish on the Pig & Fiddle website reads:

Located at 50th and France Ave. in Minneapolis, Pig & Fiddle is the gastro-pub younger sibling of the Muddy Pig. The beer list is worthy and hefty with 36 taps along with a rural Euro-inspired menu.

Wendy and I both ordered:

I love asparagus, so I liked that addition; but the sandwich didn’t really taste like a grilled cheese. I think I would have called this sandwich something else. It tasted like springtime! But the real star of my plate was the side salad! Sandwiches are served with “a choice of frites, a tossed salad or mashed potatoes.” I read what was in the Main Dish Tossed Salad and knew immediately that it was what I wanted as my side. 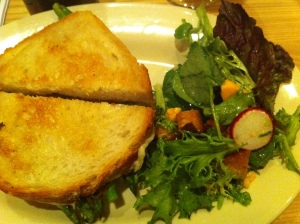 Can you believe that I loved this salad so much that the grilled cheese was an afterthought for me? I loved the chunks of aged cheddar, the crunch of the roasted sourdough croutons, the perfect blend of mixed greens and the tangy vinaigrette. It’s not very often I have radishes either. Did I mention that I kind of liked this salad? Yup. You’ll find it on our Best of the Twin Cities page!

The boys ordered the burgers:

They didn’t realize it until after digging into their burgers that they weren’t cooked correctly. Rob tends to eat all of his fries first. So, while Tracy made his way through his burger, he just thought it was undercooked. However, when Rob got to his burger and found that his was overdone, we knew what had happened. They placed the burgers in front of the wrong people. Don’t worry! The server and manager made it right for them!

The boys tried a few different brews that night, but the favorite was:

If you don’t like ales that are too hoppy, just give an Imperial or Double IPA a try. It sounds just wrong, but I feel like the imperials and doubles often taste smoother! Yes, there is still hoppiness, but in my opinion, it’s more well-balanced, despite the high percentage of alcohol.

On our second visit, I got the tossed salad as an entree and was happy, happy, happy. Plus that was the night we discovered Steel Toe Dissent.

Our most recent visit was in January, when we decided to order and do a battle of Imperial Stouts! We wondered if the local Fulton Worthy Adversary would hold up to Michigan-based Founders Imperial Stout. Founders has a tough time making a bad beer.

I honestly don’t even know which one is which now… {Funny how they were served on Left Hand Milk Stout Coasters!}

The winner? Founders by .0000000001 %. Seriously. They were both that good. If you ever see one of these on tap, order a pint. They are hard to find and once they empty the keg, it’s usually gone!

That night, for food, we switched things up again: 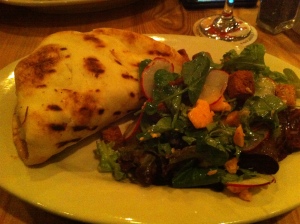 I was debating between this and a British Chicken Kebab. This pita sandwich doesn’t seem to be on their menu anymore. I believe it was chicken curry, but I remember it being pretty light on the chicken. And there is that salad again!

This was a pasty stuffed with beef and gorgonzola. Rob loved it, but I’m not finding it on their menu anymore either. Some items could be seasonal.

Still, looking at their current menu, I’m thinking I need to try this next:

Guajillo Chile Rubbed Rib Tips with rhubarb glaze and Belgian endive. Looks like another trip to Pig & Fiddle is in order!

What is your favorite pub fare?