Earlier this week, I mentioned that when we are dining out in Michigan, sometimes there are places where we like to dine and there are some places that are just better for drinks.

Piper’s Pub happens to be one of the latter. I’m just not fond of the food here, despite the fact that menu doesn’t look too bad:

Yeah. Piper’s Pub is another one of those dining establishments that doesn’t put its menu online. The menu above is from the Gladwin Buyers Guide.

Rob loves the Bleus Burger here, but when I tasted it last time, the meat seemed “funky” to me. Maybe I’ve just been spoiled with good meat at so many of the farm-to-table restaurants we have going on in the Twin Cities. I do like the blue cheese sauce and the ciabatta bun, though. Can I get this one sans meat, perhaps?

In fact, most of the crew gets burgers when we dine here. 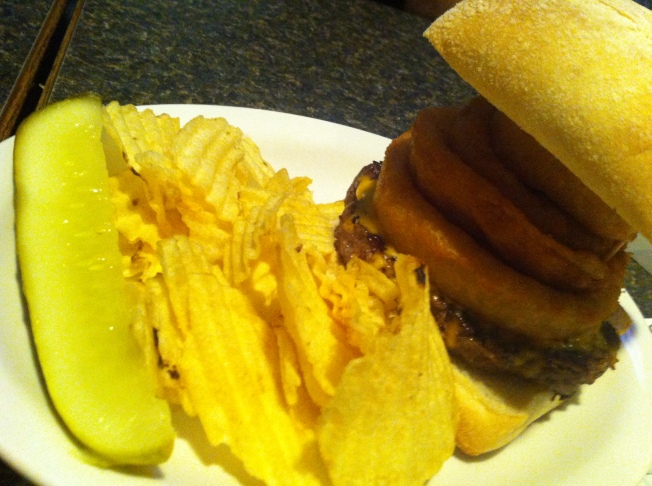 I thought that the onion rings on the burger was a brilliant idea. Although, I’m sure that most people just take them off and eat them separately. All the burgers/sandwiches come with fries. It’s an extra $2.49 to add those pub fries that I love so much.

Forgetting that I was going to give a salad a try next time, I ordered a grilled cheese. I didn’t have high expectations, so I wasn’t surprised with the turnout being sub-standard:

But I did steal a few of Rob’s fries, which are, in my opinion, the best food at Piper’s.

I also got a few photos of the actual menu. Let’s analyze it a little more closely, shall we? Maybe I can find something to order next time. 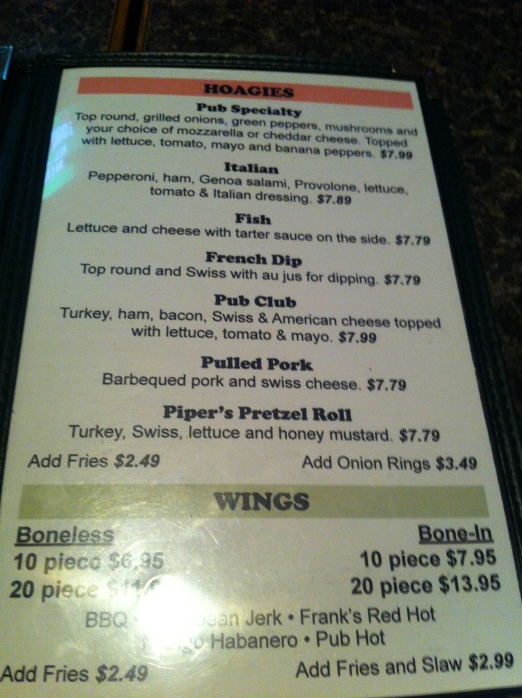 Hoagies and wings don’t usually excite me. I remember that, last year, someone ordered wings and said Buffalo Wild Wings are better. And do people actually order Hoagies at a sit-down restaurant?

I actually don’t even recall this menu page! Pizza? They have pizza? Why haven’t I tried that? My guess is that we already had Pizza at M’s and were either pizza’d out or knew it wouldn’t live up. we knew it couldn’t live up. It might be worth trying sometime, though. Maybe.

I like to call these apps The Usual Suspects because you can pretty much find them on every menu in this neck of the woods. As for the salads, the fact that there are no descriptions probably shied me away from going that route. I always fear bad chunks of old iceberg lettuce and a mealy tomato. And from our experience last year, I can tell you that nacho pile could be a pile of something else. And I don’t even think that’s because I’m comparing them to the most perfect nacho you’ll find in the area at Beaverton Tavern.

Wait! There’s chili on the menu. If I’m looking for a semi-decent-healthy choice, I might want to give this a try in the future. I don’t remember that being on the menu either. But when it’s July and I just got done swimming in the lake, my first thought is not a big bowl of chili. And would this still be the same funky meat? I’m guessing no, because it’s probable that the burgers are frozen patties. I doubt they’d break those up to make chili.

Actually, those wraps sound good, too. It’s interesting how much more you see on a menu when you don’t have to make a decision in two minutes! It looks like there actually are a few things to try if we go back next summer.

Finally! On to the beer. The beer selection is quite good for a small town! The more interesting beers, however, are offered in a bottle rather than on tap. We are okay with that. I’m sure it would be hard to move them otherwise. We wanted to know what was offered, so we asked for a beer menu. 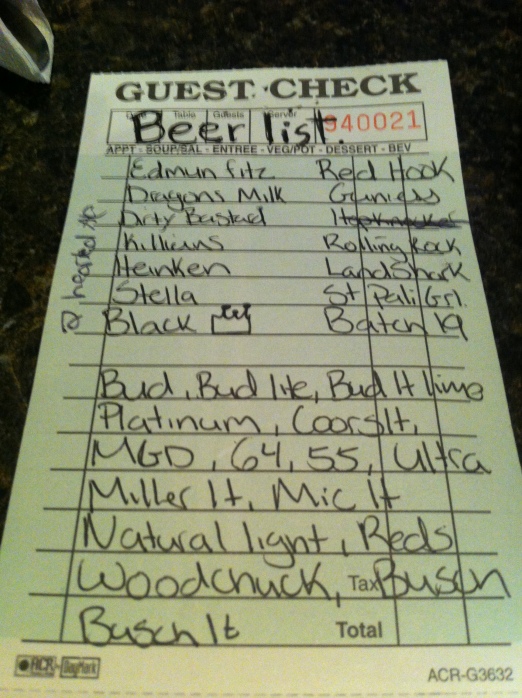 Yeah. This is what we got. I think it’s the only list in the place and really for the servers’ reference! Okay, so the beer list isn’t that extensive, but there are excellent beers on it! At least three of those hail from Michigan. Here’s my fave of that bunch:

In fact, this is probably one of my top ten beers of all time.

I am never disappointed when I order it. For the first time ever, I turned over the bottle to read the back. I love the description and now I have some food pairing ideas! And look at that alcohol percentage. This one could be dangerous! It’s too easy for me to drink… 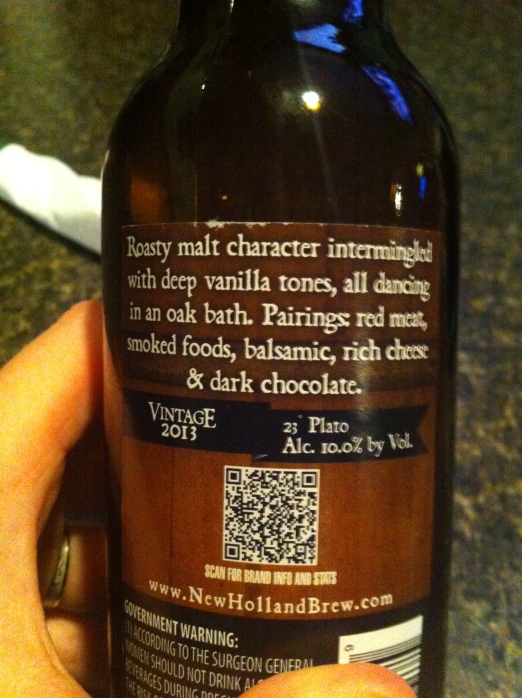 Truthfully, though, I always commend a bar or restaurant that serves local beers. Holland, MI may be a few hours away from Gladwin, but serving beer from your own state is local to me!

Have you had Dragon’s Milk?

Name one beer that would go in your list of Top-10-of-All-Time.

{Yeah, that’s a selfish one to get new brews from you!}