This past weekend, we celebrated my birthday with our birthday dinner tradition. Last year, we were in Chicago, on our way to Ireland and I had an absolutely perfect experience at Naha. It was going to be tough to top that.

I wasn’t really trying to top anything, though. I just wanted to go someplace nice and new for dinner. Originally, I had chosen Louis Ristorante in St. Paul. But then, just one week before my birthday, I received this email in my inbox. I was immediately intrigued and changed my restaurant choice to Heidi’s.

Rob made reservations for early Friday evening, perhaps to make a night of it. We tend to sit at the bar when we dine out, but this birthday girl got to choose.

First, it was 80-freakin’-degrees. It’s never 80-freakin’-degrees around my birthday! It’s the time of year that starts to get rainy, dreary and cold. So I had seriously considered sitting out on the patio. But I remembered the photos from the article and thought about how nice it would be just to sit inside, not at a bar, but at an intimate table. {Besides, the street traffic seemed pretty loud.}

We were seated in a corner of the restaurant. The table was set for two, but each of our chairs were situated with their backs up against each corner of the wall, so we that neither of us would have had our backs to the rest of the dining room. This is the first time I’ve been seated this way. In hindsight, it seems so obvious, but at the time, I thought it was brilliant.

Rob still found it strange that after we ordered our silverware was placed in front of us, in the middle of the table instead of beside us:

The menu here is a little different, so I’ll explain a bit how Heidi’s works. You can order a four-course meal for just $48 by choosing one item from each item on this grid. 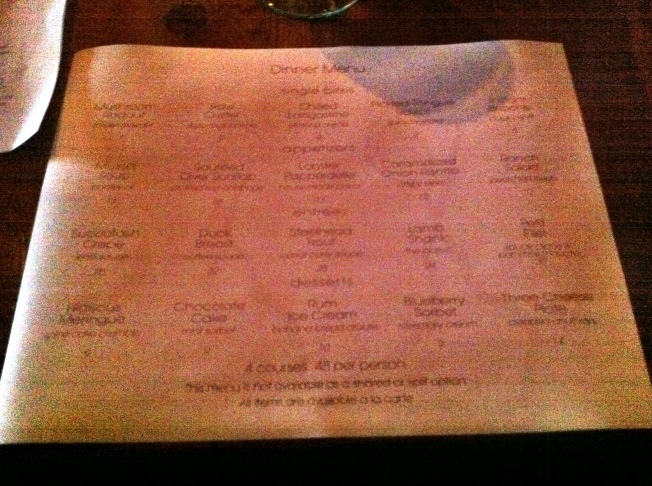 Or you can order anything off the grid à la carte. I know it’s hard to read, but that’s the best I could lighten/clarify that photo with the lighting in the restaurant. But you get the point. You can see a version of it on their website, too.

You can choose to go with the seven- or nine-course menu. If you decide to go this route, all of people in your party must do the same. This was not an option for us with Rob’s allergies.

Before we ordered, we each started with a cocktail. 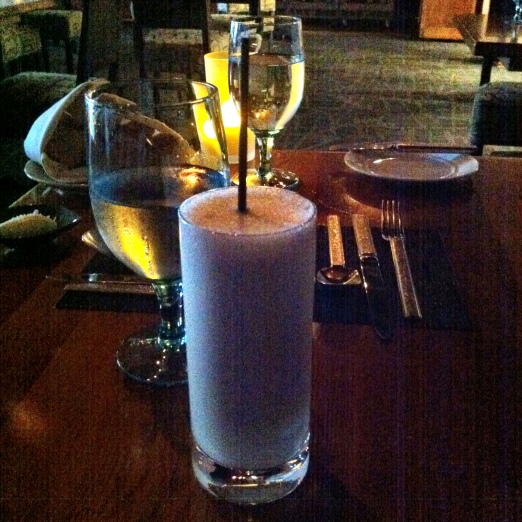 I really couldn’t justify getting a $20 cocktail. But I wanted to know what all the hype was about since THRILLIST said it was “worth every penny.” Although I had no problem waiting the eight minutes for the drink preparation, I tried to time it just out of curiosity. It took about eleven minutes and that is with no one else in the restaurant ordering beverages.

The verdict? It was good. I’ve honestly never had a gin fizz before, so I don’t know how it would compare to others. But I wouldn’t order it again. Maybe it wasn’t my thing. Maybe I just expected it to knock my socks off. In any case, I know it’s labor intensive. Maybe I need to order one at the Bradstreet Crafthouse to compare.

Then there was Rob’s cocktail:

I’m not a huge fan of whiskey, but I took a sip anyway. At first, the whiskey is in your face, like I’m used to, but this drink has a really mellow finish. And I couldn’t figure out why! I couldn’t even pinpoint the flavor. That must be from the Benedictine.

I knew I was going to go with the four-course option and had an idea what I was going to order by what I thought sounded good by the THRILLIST recommendations and by, of course, looking at the menu online. Rob decided on two items from the à la carte menu which would be brought out during my two middle courses.

This was such a beautifully presented dish, one which took me a while to even notice that the eyes were still on the critter. That’s usually a turn-off to me. I don’t like me food staring at me. The flesh was topped with an almond cream, which was quite luscious. While good, it’s something I really wanted to try, but not something I’d order again.

At this point, I was feeling a little rushed. I  know that the staff was only trying to provide good service. We were the only people in the restaurant for a while, so we were the only customers to tend to at the moment. But I was hoping to order some wine with with my seafood and I wasn’t even near finishing my before-dinner drink. I had planned on ordering a glass of white wine with the seafood I was having:

I was looking at the Viognier in particular.  It’s a wine from the Var region of France. It’s a smaller locale {where I studied for a semester during college} within the region of Provence. It’s rare to see a wine from that region on a restaurant list and I know that Viognier tends to pair well with scallops…

But before I knew it, my second course arrived. 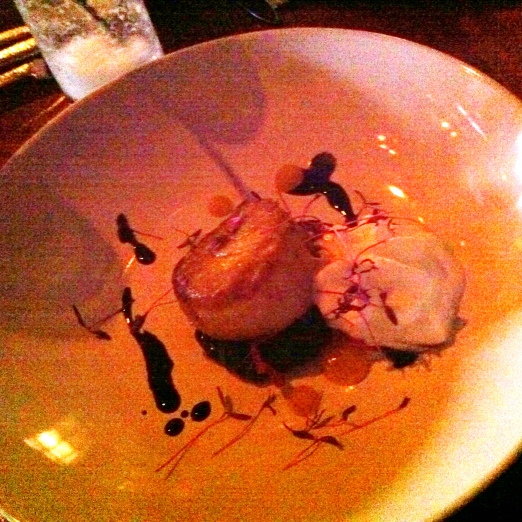 But I wasn’t disappointed because my scallop was out of this world! I dipped my fork first into the side of lavender cream. Heaven! The scallop was perfectly seared and laid atop a bed of sauteed greens. I couldn’t quite place the citrus-y sauce drizzled, but it mixed well with the darker balsamic sauce. I found it to be such a well-balanced dish of unique flavors that this scallop has found its way onto my unpublished/unofficial list of the best scallops I’ve ever had.

Believe it or not, Rob went vegetarian for the evening… 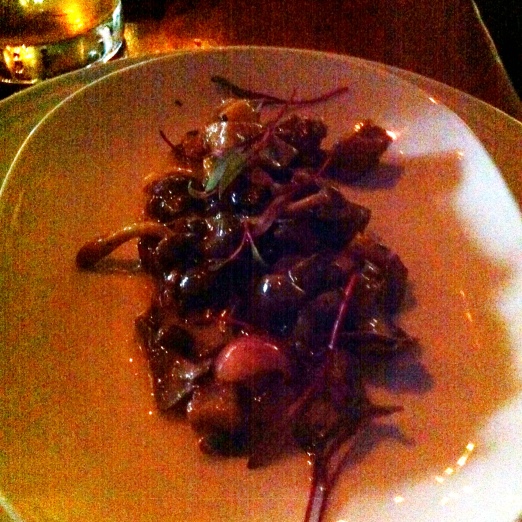 He was in heaven and said it was the best $7 he’s ever spent! Lots of umami going on there!

Originally, I wanted to try the tilefish in the THRILLIST post. But I didn’t expect it to be available when I didn’t see it online. Then I thought about the halibut. At this point, though, I had just had two courses of seafood. So I decided to go with the Petit Filet instead.

With it, I ordered a glass of Cabernet Sauvignon. Rob chose the French Syrah to go with his entrée.

Rob is not a fan of South American red wine, so I was surprised when he tried mine and preferred it over his! I liked both of them and found that they paired equally well with my steak. So we switched. 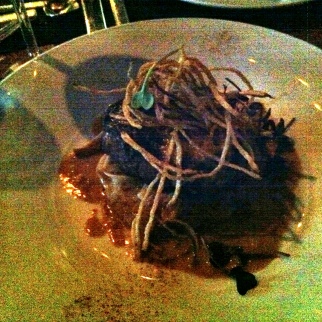 This filet was incredible. I normally order medium rare, but I sometimes find that in restaurants this nice that I need to order medium. Such was the case here, so I’m glad I told the server what I wanted.

I wouldn’t say that this steak is as good as my favorite filet in Minnesota at Sul Lago, but it’s still one of the best filets I’ve had. Rob couldn’t believe the value. This steak was listed as $36 à la carte. And I was getting this entire four-course meal for $48.

And if Rob didn’t order this, I was planning on ordering it…

This risotto is excellent – cooked perfectly al dente with lots of onion flavor. {Biz, this risotto is not for you!} 😉 Still, Rob’s love affair with the parmesan risotto at Sul Lago cannot dissolved. It’s actually no longer listed as a side on the menu there, but he orders it anyway!

THRILLIST intrigued me with this one, too. So I had to try it.

At first bite, it was a little blah. The flavors were so subtle and the merigue so light and airy {which it is meant to be.} I guess it wasn’t what struck my mood that day. Rob felt the same, but as I continued to eat the dessert, it got better as some of the flavors mixed together and I had no trouble finishing it!

Dinner at Heidi’s was an experience – one that I’d recommend. I’m curious about their Thursday Night Happy Hour. Who wants to try it with me sometime? If we have another patio night with this weather, it’d be perfect. Or we might just have to wait until next spring…

We did make a night of it and had an after dinner cocktail. You’ll have to wait until later in the week to read about it!

Do you ever do a course-style meal or tasting menu at restaurants?

If so, what’s the best one you’ve had?