A Living Social deal introduced us to Mosaic Café, a breakfast, lunch and dinner joint in the Midtown/Longfellow part of Minneapolis. I hadn’t heard of the place before. So, in my opinion, it was great advertising for them!

Whenever I consider purchasing a deal certificate, I make sure the menu looks like food I’d like to eat. There were two deal options at the time. One was for two burgers and two glasses of beer or wine. The other was just a flat $30 certificate (to purchase at $15). The burgers are what originally intrigued me, but other items on the menu looked good, too. So I purchased the latter deal.

We arrived late afternoon/early evening on a Sunday. While we did not expect it to busy, the ambiance just really wasn’t our style. It reminded me more of a breakfast joint or even a sandwich shop, which it also is. The interior was bright and sunny-like. And although they serve beer and wine, there is no bar. It was a seat-yourself kind of night and the server would be with us in a moment. 😉

We found a nice spot in a corner with some cushy pillows. I loved our festive tabletop decor and the mason jar used for napkins and flatware. I just may have to steal that. 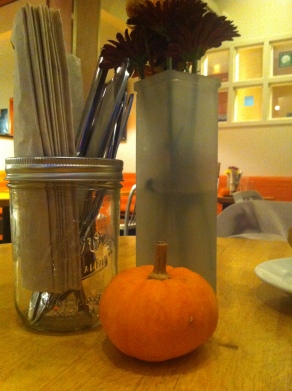 I could tell by Rob’s face that he really wasn’t excited about this place. I chose the deal so that he could try out their burgers and fries. I love that they use grass-fed beef. And it won an award from Vita.mn {a Twin Cities guide to going out} as one of the Top 10 “Best Local/Ogranic/Sustainable Restaurants” in 2013. But when Rob read that their fries were baked, he had no idea how such a place could also place as #1 in Vita.mn’s Top 10 “Best Fries” list.

He was a little skeptical.

We arrived during Happy Hour and had the option to have our drinks or any apps at the Happy Hour prices after we went over the $30 certificate.

But prices for beer aren’t too bad anyway – $5 for a pint of the local stuff on tap. And two-for-ones during Happy Hour! When I’m talking local, I’m talking LOCAL. Like, right across the street. You can see the Harriet Brewing Company building from the window. 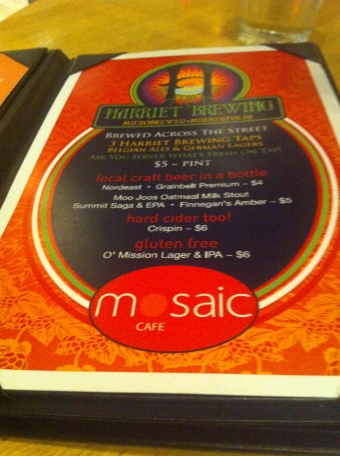 Rob and I aren’t huge fans of Harriet Brewing Company, if only because their beer isn’t our style. But I love the fact that Mosaic likes to support their community and local brewery. And with the less than exciting wine list, we decided to go with a couple of brews.

We may have ordered the Rosenblum Zinfandel by the bottle, but this list looked like they only offered by the glass here. We don’t generally order wine by the glass, if only for this reason. As I am looking more closely at Mosaic’s website for this post, it appears that they do offer wine by the bottle. This list did not make that clear. Maybe I should have asked.

Instead, I selected Harriet Brewing‘s West Side Belgian-Style IPA. It was distinctly Belgian, which I don’t mind. Rob chose the Woluptuweiss, a German-style Dunkelweizen. It wasn’t bad, but it would never be a beer Rob would order under normal circumstances. In my opinion, both beers were easy-drinking and true to style.

We put in an order for these must-try fries:

Oh dear, were these phenomenal! If I had a Top 10 Fries List, like Rob does, these would be on them. Rob loved them, too. I mean, really loved them. They were baked, crispy and golden, with just enough potato tenderness on the inside. The distribution of rosemary and garlic seasonings was perfect, too. I wouldn’t change a thing. We couldn’t eat them all and were going to send them away when our server asked:

“Don’t you want to take them home? You know you can just bake them.”

Then came our burgers. Because, yes, after all, I did order a “burger.” I was debating between the Chicken Torta sandwich with guacamole, tomatoes, cilantro, pickled serranos and black bean spread on a toasted baguette served with a chili lime crema. But after discussing it with the our gal, I went with the MoonBurger instead, not because she thought it was better; but because she gave me more info and pointed out that the burger has CHEESE. 😉

You read that right. I ordered a veggie burger! The flavors just sort of sounded good to me, which is apparent when you see why I was debating between the Moonburger and the Chicken Torta. It was so good! The southwest flavors were exactly what I was looking for that evening. However, I’m not quite sure how they even made this into a patty. It was more like it was slapped onto the bun. It’s probably not pretty if someone asks to hold the bread. The chips were plain, but very crunchy. You can upgrade to fries, but Rob and I totally missed that and ordered the fries as an app before looking ahead!

The Verdict? He loved it!

Burger Deets from the menu:

Our Burgers are  1/3 lb. Certified Grass Fed Beef from 1000 Hills Cattle Company.
Served on a Multigrain Bun with Kettle Chips and Icebox Pickles.
Sub any Side Salad for Chips $2
Sub Rosemary Garlic Fries $3
Make it a  ½ lb.  Burger $3

Our only complaint is that the multigrain bun wasn’t too exciting.

What we also liked here? The music! The background music was pretty subtle / not very loud, but we were able to pick out a little Flogging Molly, Gaelic Storm and even a song I’ve heard our local Sweet Colleens play! We also heard someone say that live music would be on tap later that evening, too.

I’d like to try Mosaic Café again sometime, but maybe for breakfast, brunch or to see some live music.

Got any too-good-to-be true baked fries recipes out there?