…Especially when it comes to beer.

But we did take a trip to see our friend Nora at Excelsior Brewing a few weekends ago. She moonlights there occasionally and we’d been wanting to make a visit. It had been over a year since our first trip to Excelsior. But of the four breweries we visited that day, it wasn’t our favorite. So it was about time to give them another chance!

As far as IPAs go, Excelsior’s Bridge Jumper IPA is a pretty solid one. It’s recently become one of Rob’s favorite local IPAs. Excelsior Brewing likes to celebrate all things lake-related, as it is inspired by its own Lake Minnetonka. So it’s only fitting that this is named after a childhood rite of passage of the locals living by the lake.

However, on this visit, Nora pointed out a new brew and I decided to give it a whirl. And it was then that I fell in love with Mister Jimmy’s Ruby Brown Ale as well as the story behind the local legend, Mr. Jimmy.

“You can’t always get what you want,” Jimmy told Mick. But Jimmy gets his cherry in this gracefully caramel accented ruby hued ale. Starts with a refreshing tart cherry sweetness, followed by a subtle wave of chocolate. Portions of proceeds sold in tap room go to Local ICA Food Shelf in honor of this local legend.

Well, what I’ve been wanting lately were those rich Bourbon Barrel stouts and porters. But what I didn’t realize was how much I needed something new like the Mr. Jimmy Ruby Brown Ale! Excelsior describes this release as:

“…an imperial version of our Black Ale, Nunnmorblak, with the addition of Cherry puree and Belgian Candy Sugar.”

Um, yeah. With Bridge Jumper in hand, Rob had beer remorse. And he did make his own jump over to Mr. Jimmy himself afterward. Our only gripe? We couldn’t get it by the growler. 😉

Speaking of growlers, I learned a thing or two by reading this on the Growler cooler: 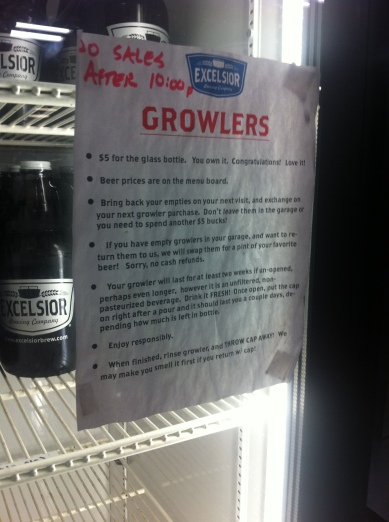 Important: Please note the shelf-life of beer in Growlers. It’s good to know because I’ve found it a common topic of conversation whenever a Growler is opened. Now we have a definitive answer.

But I find the last bullet point the most educational of them all. 😉

One thing we love about the Excelsior Brewery is the how laid back the tap room is. The first time we were there, we were on tour with sixty people. It was a tight fit in the small garage. But hanging out was much more relaxed this time around. 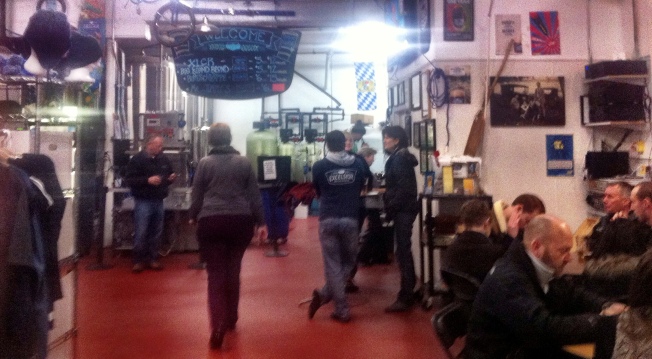 Rob pointed out that a couple brought a deck of cards to pass the time while tipping back a few brews.

Excelsior-Brewing-logo-ed everything fills the room. Much of it you can buy, but some just decorates the interior of this warehouse. I also liked the fact that you could buy your friend a beer for a future visit:

“Beers not redeemed within 90 days become old and stale so we will remove them.  But we will donate 50% of the investment to ICA Local Foodshelf.”

I love that! My friend Lisa and I first came across a pay-it-forward style bar when Rob and I were visiting at their cabin. We knew we’d meet up with the boys later after golf and decided to buy them a beer for later. Genius.

Have you been to a bar or brewery where you can buy a beer for someone in advance, even if they aren’t with you that day?

Have you found a new beer you love lately?