It’s the Breed Reveal of our very own Shamrock Bugaboo! 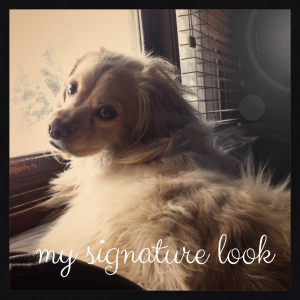 We’ve already revealed Shamrock’s breeds at a couple of parties in the past four or five months, so this may not be news to some of you… But I’m also reviewing the product we used to determine his breeds.

We found Shamrock completely by accident almost a year ago. Rob was emailing me pictures of pooches to cheer me up. He sent me a link to photos of adoptable Shih Tzu Mixes, in hopes that some Sophie Jean look-alikes would make me smile. But up popped this picture instead:

What? A Cocker Spaniel-Shih Tzu? That’s a Sophie-Benny blend! To read more about how we scooped up Shamrock and made him ourts, click here.

We definitely saw the Cocker Spaniel in him because he looked very much our beloved Benny Bear, who was also a Cocker Spaniel mix. But I did not see the Shih Tzu at all. I am fully convinced that Sham was meant to come to us by mistakenly being put in the Shih Tzu category.

But what else could he be? The breed we kept circling back to was Corgi because of his long body and short legs, which Rob dubbed, “tomato soup can legs.”

The vet wouldn’t really give us his opinion either. “We’ll never really know…” he said. Come on! Play along! Maybe he didn’t want to be quoted.

Then Rob’s friend Rob told us about a DNA kit he had used to determine his dog’s breeds. {Rob works with about five other Robs. No kidding.}

It’s called Wisdom Panel and it runs around $80. That seemed like a little steep just to satisfy our curiosity; so we waited to see if a deal would be offered. Sometimes you can find them on Coupaw. But our friend Rob tipped us off to a certificate for half-off on Woot.com. When all was said and done, we paid $55 including shipping both ways. What do I mean by that?

It was so easy!

You send them no other information about your dog. Not the age, nor the weight, nor any photos. Nothing. Pure science at work here.

I didn’t think I got anything on the swabs because I couldn’t see anything. Not even saliva. That made me nervous that we just wasted $55. But apparently I did collect something. Because a few weeks later, I got an email like this: 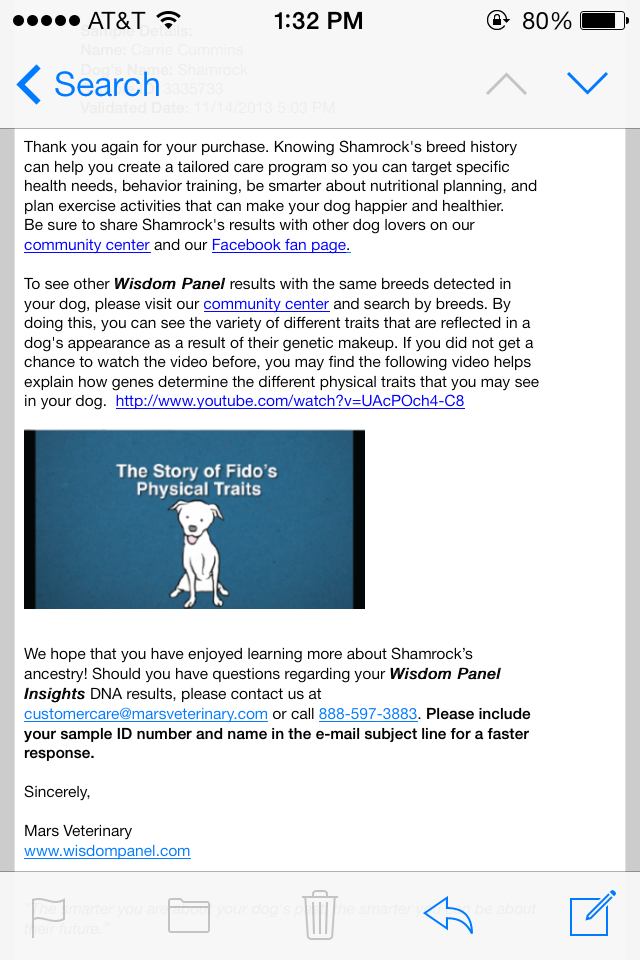 Included in the email was an attachment:

Is that what you would have guessed?

We gave prizes for correct guesses at my final Open House Wine Tasting and a Poker Night around the holidays. No one was spot on, but I was really surprised that two people got two out of three breeds correct with with one guessing Cocker and Pekingese and the other guessing Cocker and Bichon.

And of course, Shamrock is clearly more Cocker Spaniel than anything else. Take a look at this break down:

Also included is full-page information on each of the main breeds to determine if we can pick up out any physical or behavioral traits in Sham.

We noticed the hunter in Sham right away. Not only does he go crazy over squirrels like most dogs; but he also goes batty whenever he sees any sort of bird! Sophie couldn’t care less about birds. And of course, Shamrock is very playful. He wants to play with every dog he meets! 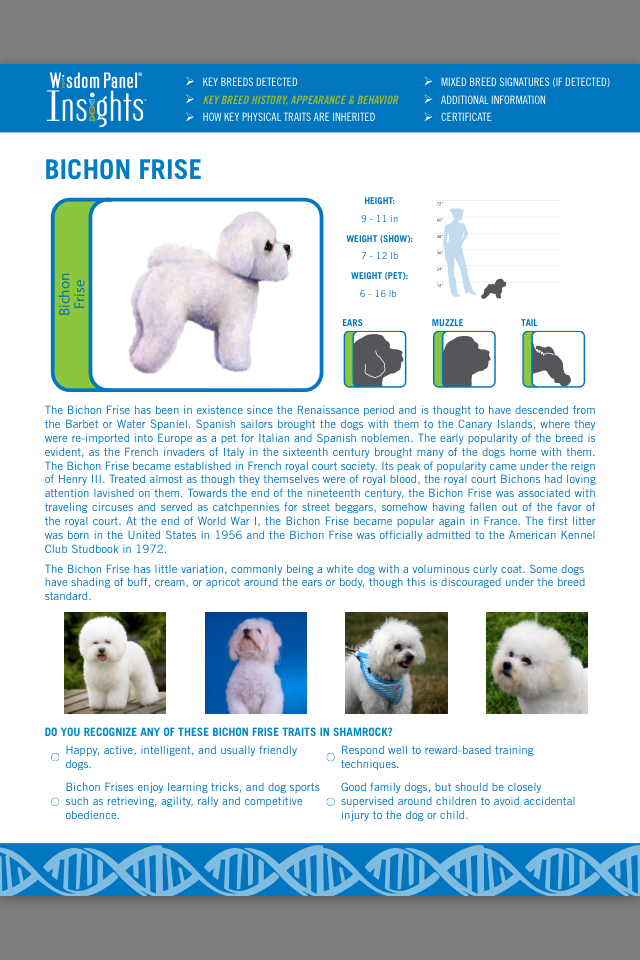 The Bichon was hard for us to see; but it may account for his long body. Although the main photo above doesn’t show a long bodied Bichon. But Shamrock has a long body, long tail and a low-pitched bark kind of like our friend Jen’s Bichon, Finnegan. 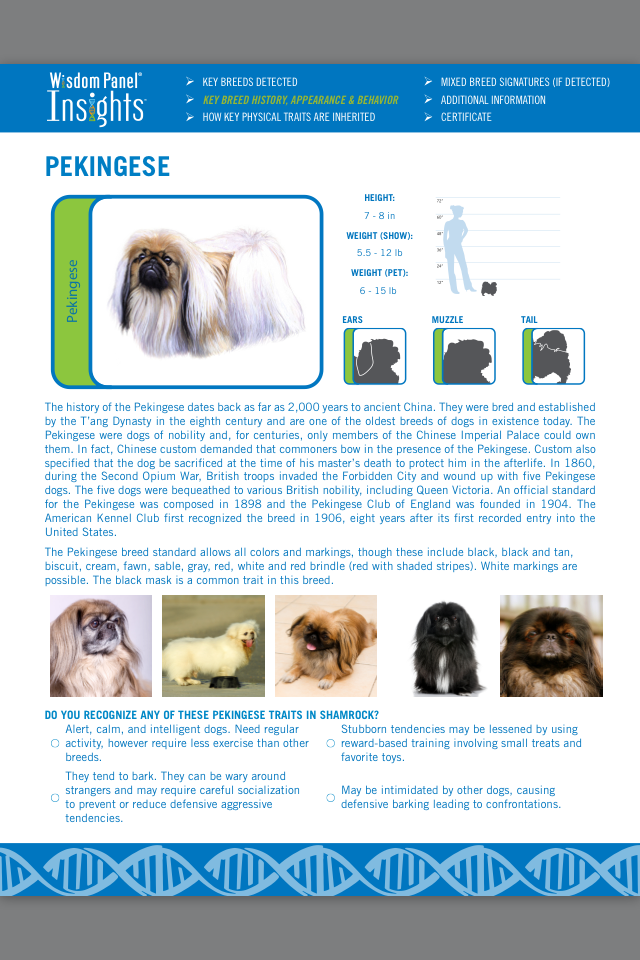 Shamrock has the softest coat. We thought it was just his puppy coat and he would lose it. He’s almost 17-months old now and still hasn’t lost it! It’s soft, but gets matted very easily. Like every day. I’ve read that a Pekingese coat is hard to keep neat. I try to brush him every day, but we can’t get it all done in one sitting. We often cut out little matted chunks that would just hurt to brush out. Because of that, we call him our Patchwork Dog. Although, Sham has attained a lot of nicknames by now: Bugaboo, Rubber Dog, Mr. Nibbles, Shamalamadingdog, Shampoo, Shamu, The Sham, The Rock…

But there were some detections of other breeds in him, further back in his ancestry, of course: 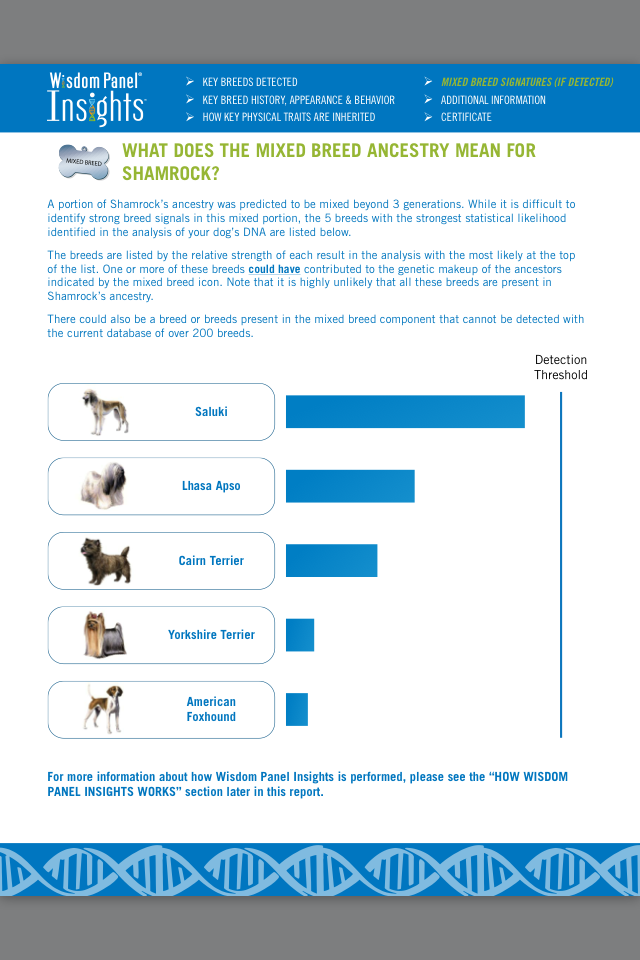 At first I thought Shamrock had Cocker Spaniel ears because of how much they looked like Benny’s ears: 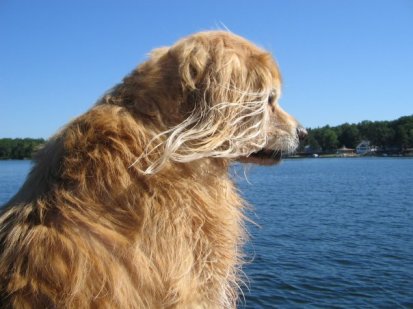 But then, when we first received these results, I thought maybe he had Pekingese ears. But when Sham is standing, his ears appear to be so much longer!. Perhaps he inherited them from a Saluki? 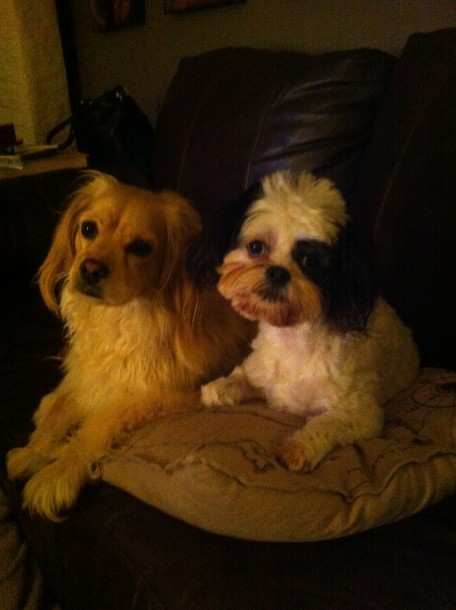 So why would you want to know the breeds of your mixed breed dog?

All breeds have different health and behavioral tendencies. Sometimes it’s good to know what’s in store for your dog. Or, if you are having issues with him or her, you can learn what approaches might be best to take to correct such issues. Or, like us, it might just be pure curiosity. People are asking all the time. It’s a great topic of conversation!

Shamrock makes us laugh every day. And Sophie now has a playmate! She and Benny never played. But she and Sham were practically best buds from the very beginning. 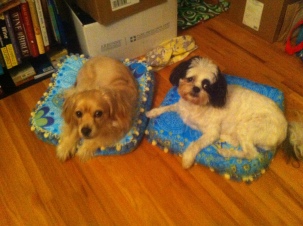 We are so lucky to have found our Shamrock.

May the luck of the Irish be with you, too.