Yesterday, I gave some links on how to soak up every last bit of summer in the Twin Cities.

After summer is gone, fall means…

And although I’ll talk about football briefly, the real purpose of this Fantasy Draft post is to pick my favorite BEERS! Click here to read about my 2013 Fantasy Draft Six-Pack.

But first, I need to announce that I’m especially excited for football season this year because I am finally a… 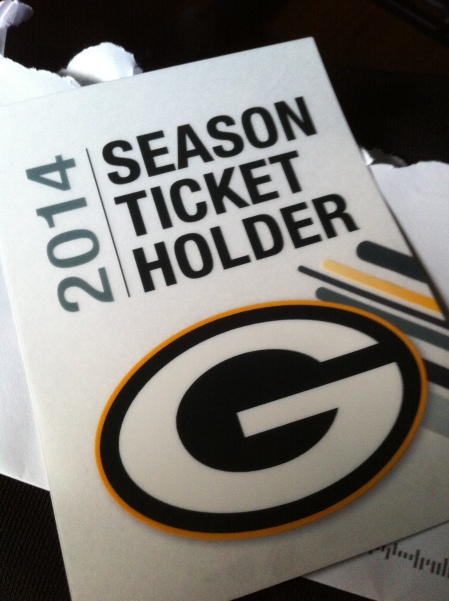 Yes, that’s right. I put my name on The Waiting List 20 years ago and I now have season tickets – for the Gold Package. For those of you who don’t know, the Gold Package consists of three games. These tickets date back to the days when The Packers played three games a year at Milwaukee County Stadium and the remaining games were played in Green Bay. If I wanted to pass on the three-game (Gold) package, I could keep my name on the waiting list for the Green package, which is for the rest of the games. The wait for that? Estimated at another 17 to 20 years.

Living in Minnesota, I’ll think I’ll take what I can get!

As much as I love Green Bay football, I have to tell you that my Fantasy Draft (beer) choices for 2014, will not be served at Lambeau Field.

What, you mean that they don’t cater to MOI?!!!

1) No repeat beers from last year. (Although I still love all of those!)

2) No repeat breweries within the same six-pack. For example, even if I am in love with two beers from say, Sam Adams, I can only include one.

So, cider isn’t exactly the same as beer; but I’m putting it in my six-pack anyway! I’ve been meaning to tell you al

l about this cider for probably a year.

It is my favorite cider of all time.

It takes like the yummy non-filtered (non-alcoholic) ciders you get right at an orchard. It’s tasty and perfect. I’ve tried other “farmhouse” style hard ciders since, thinking it was just the type I liked. But I was wrong.

Nothing else comes close.

Sorry, you can’t get this beer anywhere but the taproom. So if you are in the Twin Cities, it’s important that you make a pilgrimage. I’m not even sure if it’s on tap all of the time because they brew everything in small batches. But I’ve never had anything like it.Tthe aromas of hazelnut alone are transcending. It smells like they have been toasted. And the flavor? Just as rewarding.

I normally don’t even like New Belgium’s beers. The exception was when I discovered their Cocoa Molé a couple of years ago at the Happy Gnome.

Well, they did it again.

New Belgium came up with something unique and delicious. We discovered the Coconut Curry Hefeweisen at Devil’s Advocate about a week ago. I was really surprised when my wheat-beer-despising husband ordered it. In fact, he’s not even a curry fan. But he was intrigued. And he loved it. I took a sip… and I stole it. He had to order his own.

Rob didn’t get anything but coconut; but there is a hint of heat on the finish, which is what I feel is what a good curry will do. This beer might sound kind of strange,;but it’s very rewarding and much better than I had expected. I want one while I’m writing this. It’s a specialty beer that appears to be bottled, but I haven’t done any research to see if we can get it anywhere else.

Here’s another brewery which I’ve never found outstanding…  But when Rob picked up this beer,  it wasn’t the brewery that turned me off. It was the name/description. I mean, come on, a Chocolate Peanut Butter Porter. I personally, had never seen peanut butter done in a beer before. And it actually sounded kind of disgusting to me.

But I tried it anyway…

And they nailed it.

Seriously. I stole one from Rob’s six-pack. And he smiled. Trust me, give this one a go.

You’ve probably read enough about my love of Bourbon Barrel Beers. And Dragon’s Milk is no exception. But when Rob saw this one at Blue Max in Burnsville, he thought of me. And he bought it as a surprise. It’s kind of like Dragon’s Milk meets the Cocoa Molé I was mentioning above. Have you had one of those chocolate bars with chilies in them? This is like that.

With a spicy finish.

I couldn’t leave this one out. I’m still stuck in my love of Bourbon Barrel Beers.

And this is my favorite beer of all time.

I promised it to my dad for Father’s Day; but I can’t find it now. My local MGM is no longer carrying it. I can settle for the Bourbon Barrel Barleywine, which I love 99.9% as much. (I did a side by side tasting!) But I’m sure that my faves are just not around this time of year. I wanted to talk to Central Waters at the Canterbury Beer Fest. But they didn’t show up.

I searched the festival over several times. They were a no-show. {Insert Sad Face here.} I need to take a serious roadtrip to their taproom in Amherst, Wisconsin. They have many more Brewer’s Reserve beers that I’d like to try… Well, if they are available. I could become a stalker. Anyone want to join me?

Coming over to my house?

Pick up any one of these beers and you’ll win me over. 😉