What I love about blogging is that my travels can become a virtual scrapbook. I tried scrapbooking once. You know, the kind where you crop photos and insert special backgrounds, captions and shapes into a real, hand-held book?

That wasn’t for me. In fact, it totally stressed me out. Trying to come up with a layout, decide which photos to use and not to use… And then there was the fear I would have too many photos leftover or not enough pages!

When I blog, I can write about whatever I want, whenever I want, about as much or as little as I want to share. Plus, the best is that I can post… in any order I want! And Kat taught me, that it’s even okay to write about Travels Past. {Hello, Ireland! I still have more I wanted to write!}

But what I want to do more than anything, is get out as many of my trip thoughts and memories into words onto these pages before they start to fade. So here are some scenes from Sydney! 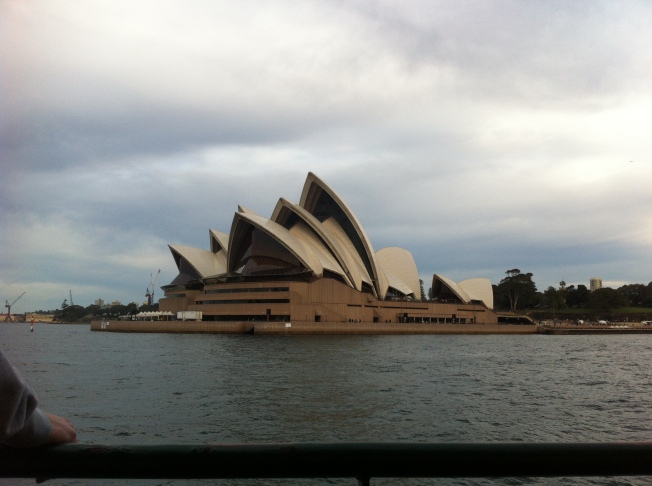 After a four-hour flight to L.A. followed by a 15-hour flight to Sydney, I knew we had to hit the ground running and put ourselves on local time. The only trouble: It was only 6:30 a.m. in Sydney. I did get more sleep on the flight over than I had expected. (I fell asleep every time I tried to watch a movie!) But our goal was to make it through until at least 8pm that night.

Upon arrival, we had so much adrenaline and thought, “This isn’t that bad!” Still, the airport felt like chaos to us and Rob and I were trying very hard to be patient with each other. For that reason, we decided not to go with the local public transportation to get to our hotel, but took a taxi instead (approximately $47 – ouch.) By the end of our stay, we learned how easy and less expensive AirLink (train to airport) is. Note to self for next time!

Upon arrival to our hotel {we stayed at the Meriton Service Apartments – Kent Street}, we hadn’t anticipated that our room would be ready. We figured we’d just drop our bags and be on our way. But we were in luck. Our studio apartment was available. I made this accommodation choice based on price. Circular Quay/The Rocks area was too expensive for our 17-day trip budget. The Trip Advisor reviews were great and the extra discount they offered made it affordable. The location was ideal – just a block away from the train station and two stops away from Circular Quay. And the fact that these were serviced “apartments” meant our amenities included kitchen and laundry!

I guess you could say that we even had a view of the sea: 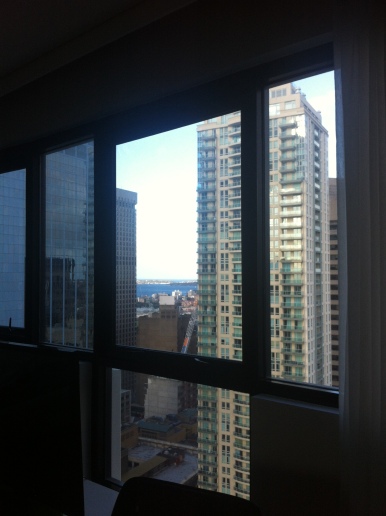 We got settled, promising each other while unpacking that we would not lie down! We came all this way and we couldn’t waste this day nor risk the chance of being stuck in the wrong time zone due to jet lag.

Instead we tried to follow this advice by getting fresh air and sun and followed this suggestion on what to see in Sydney if you only have 48 hours. We were in no hurry; but I’ve always found that getting an overview of a city is a good way to get a feel for everything and decide on what you truly want to focus for the rest of your stay. Besides, I liked the idea of staying outside to keep the fresh air moving through our lungs. It was a beautiful, cool spring day. Remember, the seasons are the opposite in the Southern Hemisphere!

I don’t know why I was so confused about public transportation in Sydney. I’ve been to many big cities before and navigated them just fine. Actually, I do know what confused me. It’s the fact that they called what other cities call the metro, subway, tram, light rail, etc… They called, wait for it – THE TRAIN. Whenever I read, “the train,” I kept thinking it meant we had to go long distances or outside the city.

Such was not the case in Sydney.

We took the train from our hotel just two stops to Circular Quay. And the moment you descend the train at that stop, you see the beautiful Sydney Harbour Bridge. It is breathtaking! 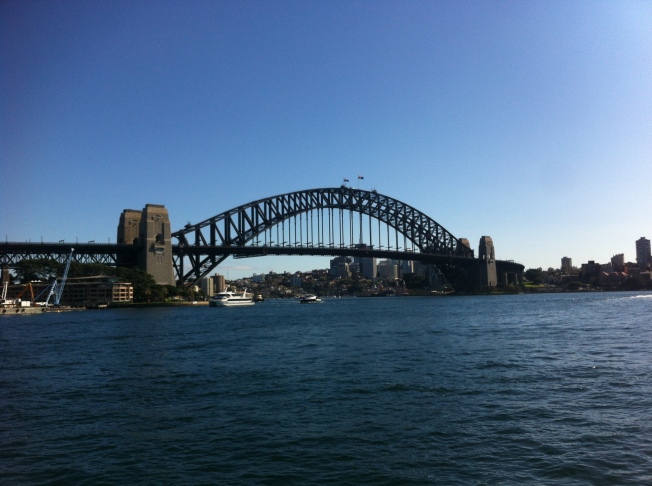 Sydneysiders also call this landmark “The Coathanger.” You can climb this bridge, if you desire. But the hefty $250 – $350 price tag and my extreme fear of heights , kept us on the ground.

At this point, we still had a long day ahead of us. We opted to get a couple of coffees. It was time to try out a Flat White! I love that the coffee sizes are much smaller and cuter in Australia than back in the States. We do tend to Super Size everything. 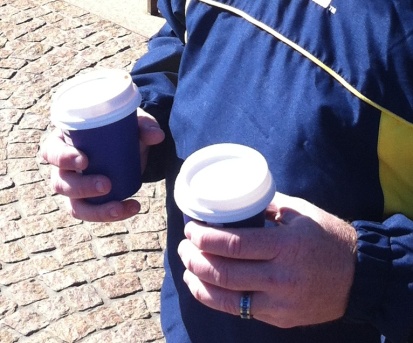 Flat Whites, we miss you!

I am normally a strong coffee girl. Give me an espresso {called a short black in Aussie lingo} or an Americano {a long black} any day. But there is just something about the Flat White. It’s like a latte – but better. It’s creamier and for whatever reason, the milk doesn’t make my stomach hurt like a cafe mocha does. I enjoyed a flat white most days of our trip. 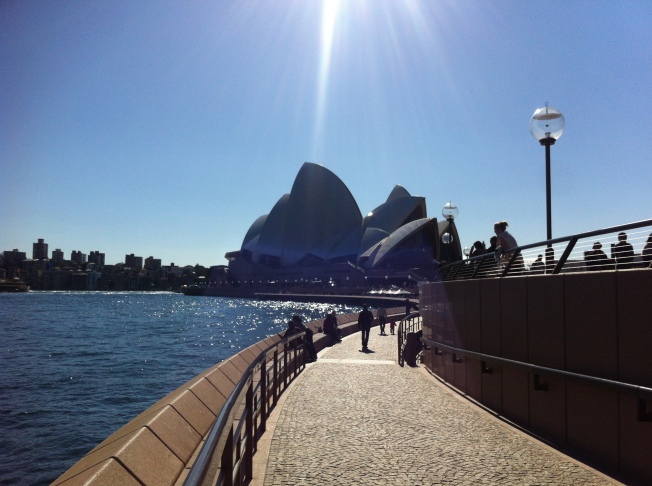 I thought, when I saw the Opera House, I would think, “Oh. There it is.” And be on my way. It’s a well-known, iconic building that I thought identifying it would be enough. But I was in awe. It was so exquisite! Designed by Danish architect Jørn Utzon, building commenced in 1959 and was completed in 1973.

Sometimes I forget how much I admire architecture until I’m on vacation. Although all I brought was my little iPhone 4, I couldn’t get enough of photographing it. 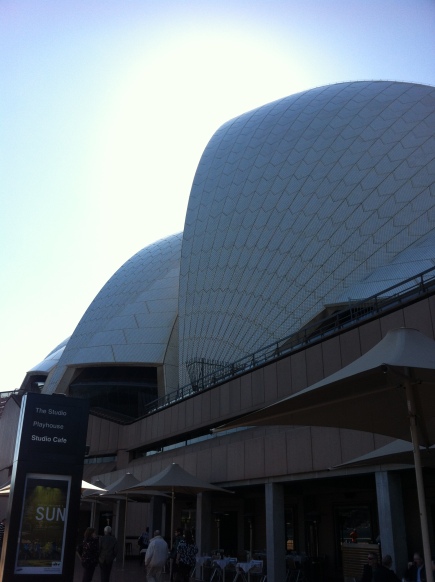 Isn’t it beautiful? It was a perfect day for a run, along the harbour with the Opera House right there. Look at the beautiful blue sky! 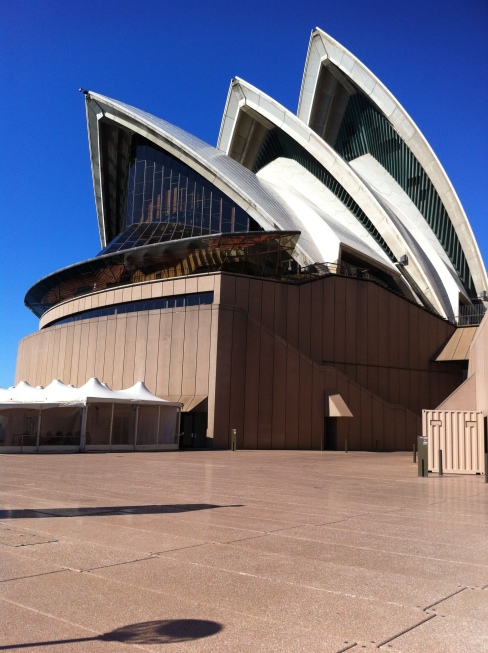 In fact, in the photo below, the purpose was to capture the Sydney Harbour Bridge reflecting in the glass of the lower level of the Opera House. But I’m secretly pleased that I snapped a runner in the background. 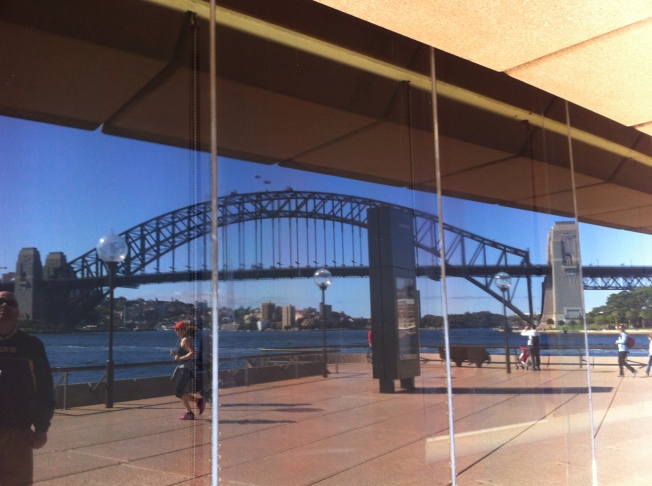 To be honest, while there, I didn’t even think about touring the interior. I’m sure it’s beautiful, too. I guess there is always next time. The cost per adult at the time of this writing is about $37 per adult. Maybe a cocktail at the bar? That’ll be on the list for next time, too.

I couldn’t get enough of the Opera House on our ferry back from Manly a couple of days later either. I kept taking photos at every angle. I was still awestruck in a way I never thought I would be. 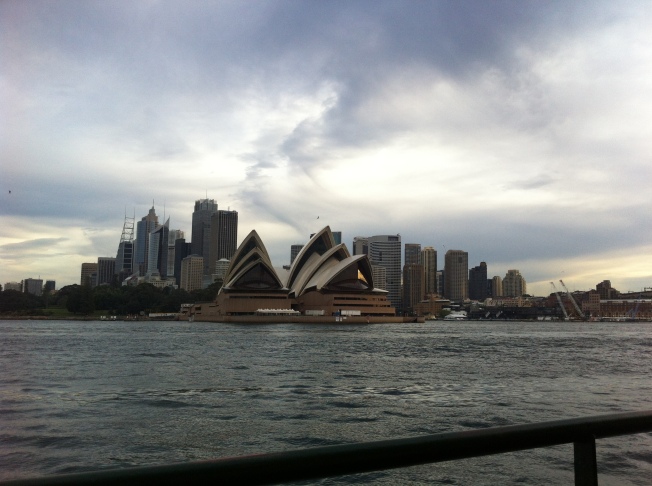 There is nothing like it. Maybe it’s the symbolism I see in the design. I don’t know if it was meant to be interpreted this way, but the building kind of reminds me of the sea, as if they are sails on the water. Or… even… shark fins! 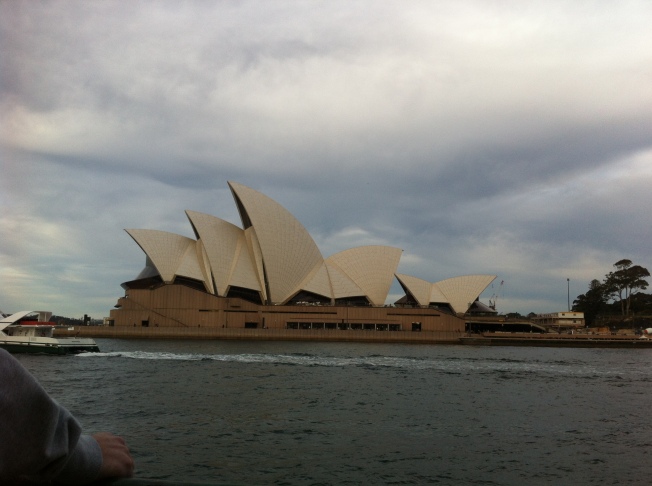 Which is where I must confess my ignorance. While researching our trip, I learned that I really knew very little about Australian geogrpahy before our travels. I pictured the Sydney Opera House along he harbour with the Great Barrier Reef in the water right in front of it! HA! Yes, really. Silly me. Little did I know at the timethat Australia is about the size of the United States. And if I were in, say, South Carolina, I’d have to go to New York to get to the reef. And we did. Don’t worry, I didn’t get all the way Australia without visiting the GBR! But that’s for another post…

One of the highlights of stay in Sydney was the Royal Botanical Gardens.  We only saw a small part of them, but we could spend days there. The unique floral, fauna and wildlife were all so new to us. Upon entry, we heard the song of a bird we had never heard before. And then they swooped down at us. We hung around checking those out first. Later, we learned, these were magpies. And we should be a little more careful! They can take an eye out!

We also walked through Hyde Park, and before we knew it, we were back to the street that led to our hotel! In retrospect, we should not have walked 8 miles that first day. {We could have still enjoyed the fresh air and sunshine sitting on a ferry in the harbour.}

Because by 5pm, we had a bite to eat at the 3 Wise Monkeys Pub near our hotel and were in bed by 6pm. Okay, so we *almost* made it to 8pm.

How do you combat jet lag?

What is your favorite way to spend a first day in a new city?

More posts on our Australia trip:

The One Thing I Didn’t Need to Bring to Australia

The Wattle and Bush Tucker