I hope you all had a lovely Christmas Holiday.

Ours was wonderful – lots of family time, food, poker and naps in Green Bay.

With the way Christmas fell during the week this year, Rob and I had a couple of extra days to vacation and relax in Green Bay before heading back to the Twin Cities.

So when I found out that there was a Central Waters Tap Takeover going on at Adams Street Pub in Green Bay, I begged Rob to go because it was just an opportunity we couldn’t miss. He was quick to point out that the tap takeover was only happening through December 21st. But on Christmas Day, I found them on Facebook and asked if they had any CW beers left on tap. They replied back almost immediately that, indeed, they did. 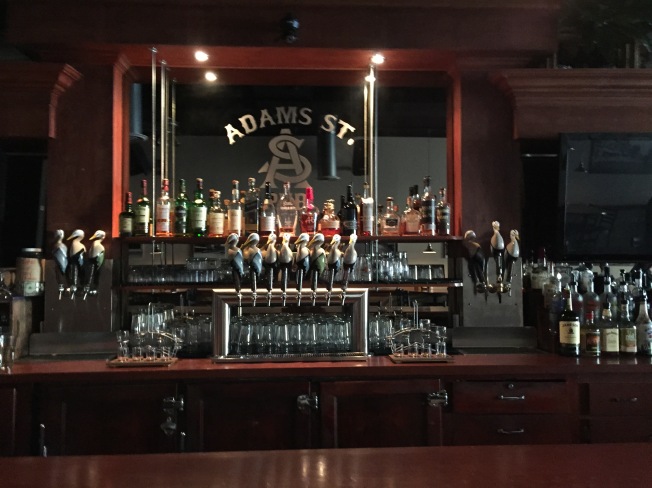 Merry Christmas to me!

I was going to have the opportunity to try my favorite beer ever – Central Waters Brewer’s Reserve Bourbon Barrel Stout – ON TAP!

So long about noon on Friday, Rob, my dad and I piled into Mitzi – our new-to-us SUV – and made our way downtown. According to the FB page, Adams Street Pub opened at 11am. 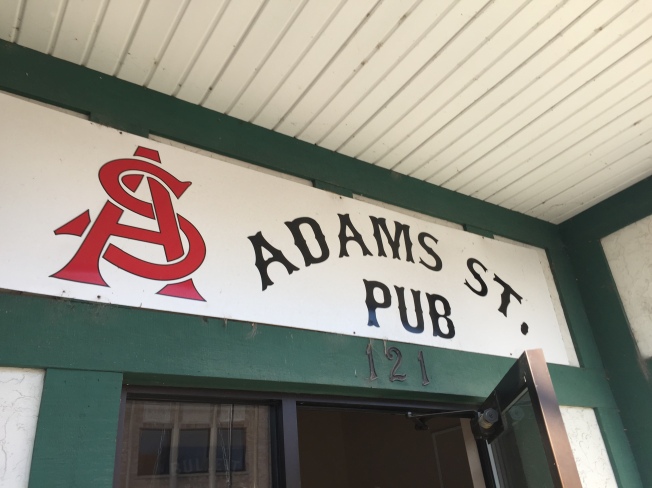 When we arrived, we pulled up a seat to the bar. The place was EMPTY!

There is a reason for this. Due to the holiday, they decided not to open until 4pm. The door had only been open for a delivery.

You can imagine how bummed I was.

So we had to figure out a Plan B, because we still needed some lunch!

Enter Green Bay Distillery, a newish restaurant-bar-distillery opened in 2011. You can read a bit about it on the front of the menu here:

By the notes above, it seems that they are in the beginning stages of distilling and have plans to expand. What disappoints me is that they only have fruit-flavored vodkas at the moment:

Why can’t you come with something more creative than those flavors? I’m thinking even a jalapeño-flavored vodka, or a ginger-infused one. Other bars do this with vodkas that aren’t their own. Why can’t Green Bay Distillery?

We were still in the mood for beer. While they have a decently sized bottled beer list, the tap selection was limited. At least it focused on a lot of brews from the region.

My dad always likes to order whatever Rob is having, but the bartender offered him a taste first. Dad was glad he did that because he didn’t think he’d like to drink a whole pint. He chose the Hinterland Brewing Company Luna Stout {Green Bay, WI} instead. And to be honest, I don’t even remember what I had. Because it was just that – not memorable.

When I took a sip from Rob’s glass, though, I thought the Blü Bobber kind of tasted like Fruity Pebbles! What’s more is that they topped the beer with frozen blueberries before serving. As they start to thaw, they bob up and down in the glass. That’s something I hadn’t seen yet!

Deciding what to order for lunch was difficult for me. In this part of Wisconsin, Friday is the day for a traditional fish fry, something you really don’t see in Minnesota. I considered taking advantage. The choices were numerous compared to other fish fry offerings at most bars, taverns and restaurants. I was intrigued by the Pretzel Perch.

But as a cheese lover, I was torn. The front of the menu (pictured earlier in this post) indicated that Food Network Magazine described this as a “Cheese-lover’s Menu.”

And if you want a little slice of Wisconsin, you can get one – with bratwurst and cheese curds on your own pizza pie! 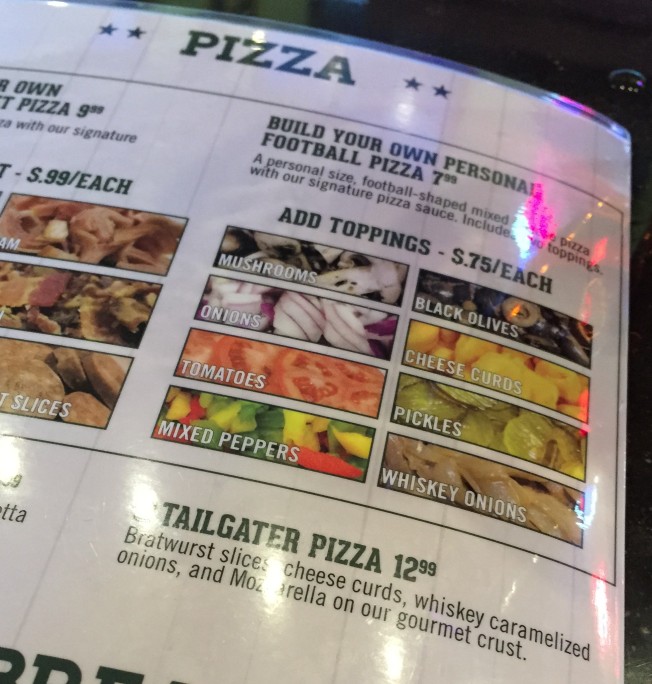 Those whiskey caramelized onions intrigued me. So when Dad said he was ordering the Pretzel Perch, I asked if I could try a bite of his before ordering something else:

The onions were sweet and tasty; the jalapeño tortilla gave it a nice flavor; and I loved that these were served with the ale cheese sauce in addition to the usual sour cream and salsa sides which accompany quesadillas. But the meat was a little chewy, in my book. I didn’t need the fries. I thought it was a little strange that they were served with my quesadillas. But I suppose they were listed under “sandwiches” rather than in the usual “appetizer” category.

But I was glad that I didn’t order the perch.

The pretzel coating was quite different from the traditional fish fry breading, but the crunch was extremely satisfying! It was the fish itself that didn’t taste great. Dad agreed with me, but had no trouble finishing it off.

I wonder if that has anything to do with the fact that he pointed out that he received a thrork (left) rather than the fork I received (right).

Ha ha! He is too funny. If you know my dad at all, you’ll know this is his usual sense of humor. When I was a kid, we were at Mills Fleet Farm because my dad had to pick up something. A stop to “pick up something” at Fleet Farm was never a quick stop. He could spend hours in there. But when we got to the counter that day my dad said to the cashier, “I was going to pick up of these up as soon as I got around to it!” Then he pulled a coin out of his pocket and showed it to her, smiling all the while. Inscribed on it:

Now for Rob’s burger… You knew he had to get the burger, right!? I mean it included a pretzel bun and was slathered with melted cheese curds! 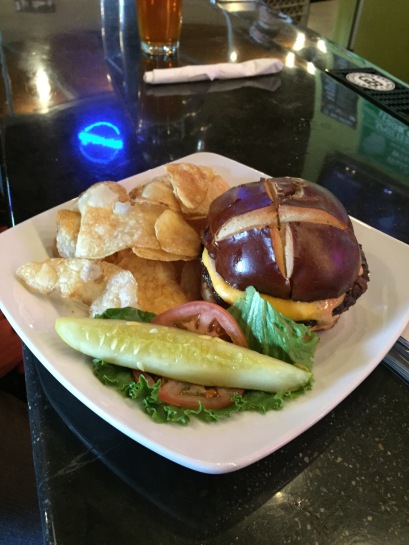 Please note: The menu says that all burgers are cooked to medium-well. Rob was not going to order one for that reason. But I considered that this place was in walking distance of Lambeau Field. My thought was that when the restaurant fills up with wall-to-wall people on game day, they just need a standard to go by for the sake of speed. I inquired about this and sure enough, Rob was able to order his burger medium-rare.

But he wasn’t too impressed. The pretzel bun was probably the best part. Cheese or cheese curds? Who could tell? He said the meat wasn’t really seasoned. He decided on chips over the fries because he asked if they were house-made. Rob must have only heard, “yeah” because I heard, “Yeah, pretty much.” For the record: They aren’t. We are just spoiled by all of the restos in the Twin Cities offering house-made chips. Really spoiled.

I’m glad we stopped in to check out something in Green Bay that might be different from your average sports bar. But really, it’s not. It’s more a restaurant for the masses adding a “distillery” to make it stand out. I don’t think I need to go back. If you are in Green Bay near Lambeau, you need to get a burger at Kroll’s instead.

What kind of food is a fun interpretation of the area or culture in which you live?