Because of the way I broke down my posts, it may seem like we spent a week at Uluru. But the truth is, it was just two nights. There was a two night minimum stay.

The first part of our tour including Kata Tjuta followed by Uluru at Sunset, dinner and stargazing began on the afternoon of our arrival. The next morning we viewed Uluru at Sunrise followed by an indigenous guided walk around the base, finishing around lunchtime.

We still had at least a full 24 hours before our departure to Cairns!

Do you remember the funny thing that happened after our Uluru dinner?

That I lost my husband?

Well, another funny thing happened before we left Uluru. The desert must do something to my brain! So just stick with me.

Palya, from my research is best translated as “good”, but it is also used as a greeting, such as “Welcome.”

If you’ve followed any of my posts on our trip to the Red Centre of Australia, you know that it can be expensive to get to Uluru and expensive to stay there as well.

But there are plenty of free things you can do near Uluru if you are staying at the resort in Yulara. Which, unless you are camping, it’s the only place you can stay.

For example, our hotel, the Desert Gardens, is named for such. You can take a free guided stroll throughout the grounds or pick up a booklet and follow along yourself at your own leisure. The latter is what we did. 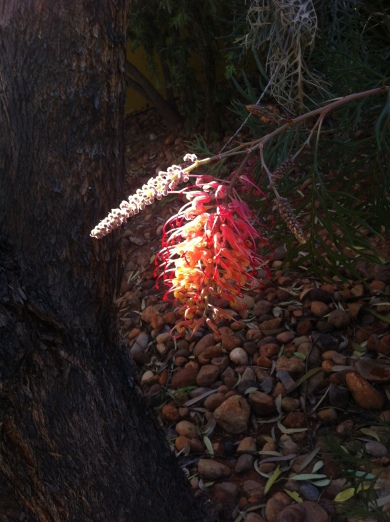 The flora was absolutely beautiful. 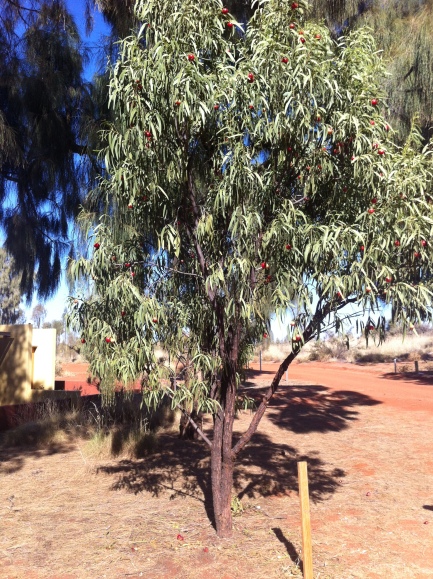 We spent the afternoon wandering the grounds. Then we split a not-so-memorable burger for lunch at one of the resort restaurants.

I took that photo before I read all of the signs stating that photography was strictly prohibited. This art, as well as handmade jewelry, scarves and sculptures, was priced in the hundreds and thousands of dollars. That’s one reason why I’m kicking myself that I didn’t check in with the locals selling art at our sunset location… And that I didn’t protect our small, inexpensive Aboriginal tapestry we bought in Melbourne by packing it in my carry-on. {It never made it home.}

We stopped at the town supermarket and picked up some provisions for the evening. We weren’t going to have an expensive dinner out. We were going to take advantage of our splurge of a room.

For how expensive our room was, I knew in advance that it wasn’t going to be anything entirely special compared to other rooms for the price. In fact, this note greeted us upon arrival: 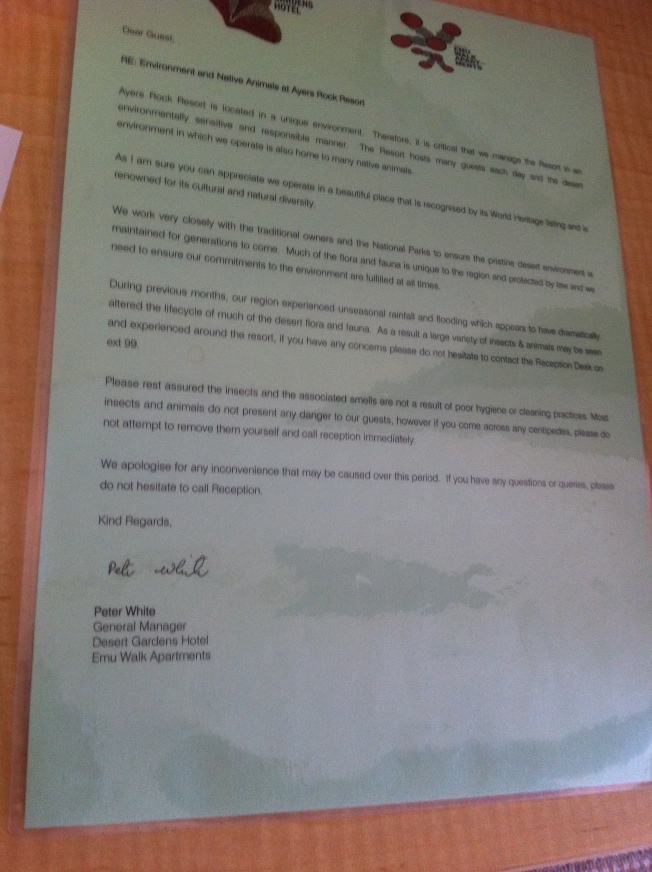 But the reason for our splurge was this:

Yes, I’ve learned ever since that I booked our Honeymoon hotel at Il Nido in Sorrento, Italy, that Rob loves a room with a balcony and a view. I can’t always secure that due to budget constraints {and analyzing how much time we’ll really spend using it}, but this was an exception.

Because, perhaps we’d save money by not taking the expensive DIY shuttle back to The Rock to view the sunset and sunrise again and by not wining and dining in a restaurant that evening.

And it was the perfect spot to enjoy some of the groceries we picked up at the supermarket.

Yeah. This was our desert view. Serenity.

We opened one of the bottles of wine we brought in from Melbourne. {Thanks to Mum and Dad for suggesting we procure some ahead of time!} 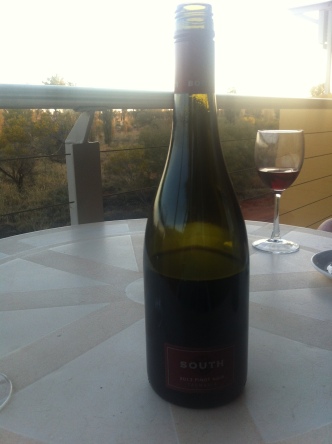 This one was another Pinot Noir from Tasmania.

Can we even get a Tasmanian wine in The States? I haven’t seen anything from that region where we live. In fact, the quality of Australian wine, in general, has decreased in the U.S. I’m looking at you with an Angry Face, Yellow Tail!

Then I spent some time bird watching.

Yes, you read that right. And my dad probably would not believe it.

Before we left for Australia, I downloaded the Uluru Bird Watching App.

I spotted birds form our balcony over this beautiful desert plain. 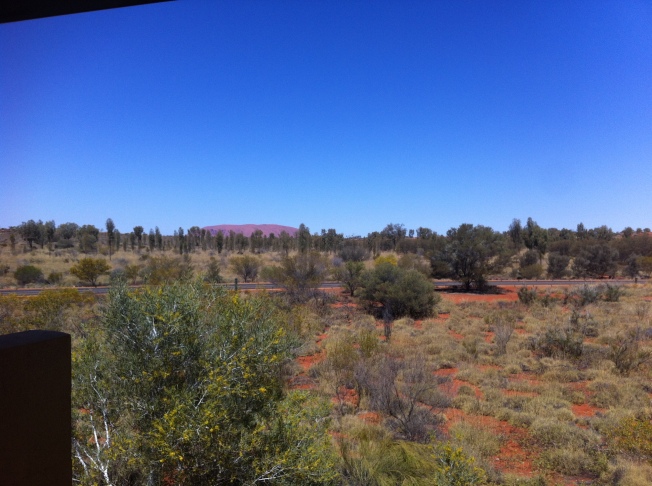 I probably would have seen more birds in the early morning.

But based on the colors I saw that late afternoon early evening, I may have spotted these:

And we know that we saw these other two several times throughout Australia:

Then I broke out some cheese for dinner: 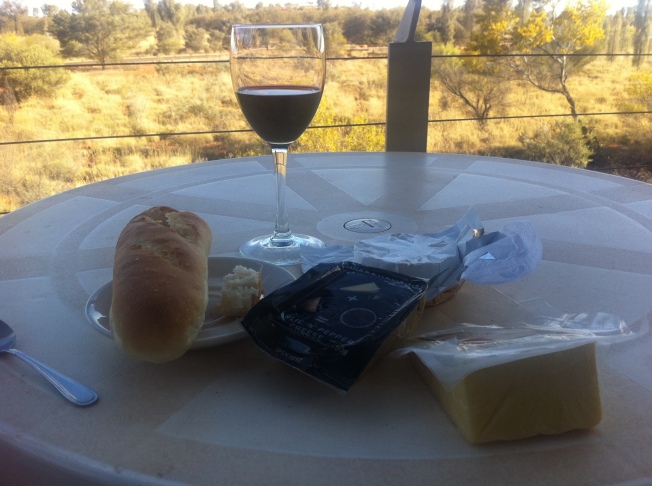 I’d love to say that I rounded this “meal” out with a nice salad or some fruit, but I did not. Instead, I enjoyed it with a view of The Rock:

And I sipped my wine, taking it all in with the silence of the desert…

And began to watch the sun set over The Rock…

We left the balcony door open {with the screen closed} through the night. It was so wonderful that when dawn came, we didn’t even have to get up to watch the sunrise. We most certainly could have, but lying in bed watching the colors begin to illuminate in the wee hours before drifting back to sleep was wondrous.

The next morning, we had time to sleep in! Which, at this point, was much needed. For breakfast, we ate some commercially packaged Caramel Slice that we picked up at a grocery store and eventually got up to get probably our last couple of Flat Whites of the trip.

But before that… {Here’s the story I was talking about.}

We knew we had a little a time on our hands.

At our previous hotels, we had secured free wi-fi, which, we found, was a lot harder to come by than it is in the U.S.

When we arrived in Uluru and saw the exorbitant $30ish dollar price tag per day for wi-fi, we decided to forego it. If we couldn’t handle a few days without wi-fi, what kind of psyche had we put ourselves in for vacation?

But that morning, we knew we had some time. So I opted for the $7 for a couple of hours of internet. I uploaded some photos and tried to call my mom via Skype. Oh how lovely that would have been for her to see our view! {She wasn’t home.}

Keep in mind that while we were in Australia, we keep our phones in Airplane Mode. We always do this when we travel abroad to ensure that we don’t get charged $800 billion per minute for overseas calls nor $800 per text.

At least, in Airplane Mode, we could have the phone on for camera use and could still use wi-fi when available.

**Note: It was not posted while we were there, so this must be something new: Desert Gardens now offers free wi-fi in the reception area and lobby. **

After my photo-uploading, facebooking and responding to our lovely dog-sitters, we decided to venture about to check out all of the other free activities that the Ayers Rock Resort offers.

We particularly wanted to see the Spear & Boomerang Throwing and the Interactive Didgeridoo Playing.

However, throughout the duration of our stay in Yulara, we had to make a note of the time difference, which is a little strange: one-half hour behind Sydney/Melbourne. Because our phones were in Airplane Mode, they did not update to the local time. So we had to think a half-hour ahead to be on time for these activities (each which last approximately 1/2 hour.)

But we had trouble finding them!

The brochure indicated that they were in the Town Square, which was relatively small, so it shouldn’t have been that difficult. But there were very few people around. We were very confused. We ended up listening to the tail end of a Bush Yarn talk instead about hunting and survival, which was very interesting, too! A boomerang is not really meant to come back, but is used as a hunting tool; which, if used appropriately, can stick right between the ribs of a kangaroo or injure the leg of the swift emu.

However, we were very confused when we saw two young men with a bunch of boomerangs open a gate and go back into an enclosure behind a wooden fence

Did we miss the boomerang throwing?

How did we miss it?

I turned and lifted my eyebrow at Rob, assuming those questions as the guide was still speaking. He shrugged his shoulders back at me. At this point, we decided to have a little lunch before getting on the shuttle for the airport.

After lunch, we went back to our hotel lobby and entrance, where our luggage was waiting as promised. We were early, so we still had a little time. But there weren’t many others waiting. Several buses came and went, but none were airport shuttles. As we got close to our shuttle time, I saw a bus pull up, but back up to park. I thought maybe it would be departing soon.

So I went over to a worker and asked:

Is that the Airport Shuttle?

No, the last airport shuttle left a half hour ago.

After he told me the time, and I looked at my phone, it dawned on me… When I paid for and connected to the internet that morning, my phone updated to the local time! I had still been calculating that we were a half-hour off! I asked Rob how he didn’t notice {he did not connect to the internet, thus his phone did not update the time} and he said he just thought I knew what I was doing and followed along. Hmmmph.

That’s why we missed the activities.

And now our shuttle to the airport!

No worries, though. The guy got on his walkie and summoned a co-worker. They put us in a van and whisked us the 6km to the airport.

Just like the night of our Uluru dinner, I felt like the stupid tourist. I apologized profusely. But of course, there were “No Worries. We had plenty of time.” There were only like three flights going out that day.

But we got to ask some burning questions of our driver, who was from New Zealand. Like, How many people serve the village and where do they live? Answers: About 800. Back behind/near the town pub, which is at the Outback Pioneer Lodge (aka hostel.)

And he was right, we did have plenty of time. There was a huge line at check-in and an Asian tour group even arrived after us. And there were no hurries. We were all on the same Qantas flight to Cairns!

And we were off to the Rainforest and Great Barrier Reef… We had just two more days left Down Under.

Have you ever missed a flight or had to have someone rush to get you there on time?

Other posts about our trip to Australia: