Now that I’ve finished recapping our trip to New Orleans, it’s time to get back to our local scene. My intention was to make Thirsty Thursday a day each week to talk about a Twin Cities brewery that Rob and I have visited over the past year.

But this past weekend, we had some spontaneous visits with friends to some Minneapolis dive bars! They were two that I would have never known existed otherwise.

She and her husband decided that it was time we made a stop at Tony Jaros (pronounced Jair-is) while we were roaming around Nordeast Minneapolis last Saturday afternoon.

It’s a little dive bar just down the road from Psycho Suzi’s. After we parked the car in back, I saw this big ferris wheel across the street.

I was totally stunned. A green and pink ferris wheel? Why is that there? As I walked closer to the building, I read the name on the sign: Betty Danger’s Country Club. It opened just a few months ago, I believe. I’ve heard the name quite a bit, but nothing about a ferris wheel.

But that will have to wait for another time. Our mission today was: Greenies! Check out how long this place has been around… 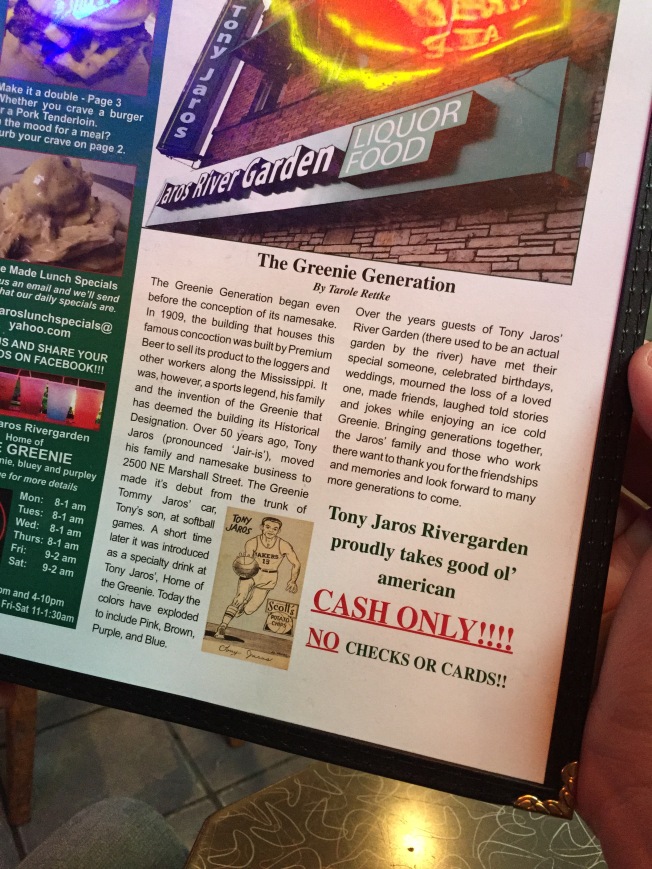 And here you are…

I have no idea what Green Glacier is and still don’t understand after looking it up online. It doesn’t matter though because Ryan was right in his description, “It’s like green Kool-Aid with vodka!”  Our waitress was so much fun, joking with us. She was just seated at the bar, telling us just to shout if we needed her. It felt like a friendly place.

For fun, we took a look at the menu. Rob was intrigued by the hand-pattied burgers. He couldn’t believe that the first burger on the menu was called the Boring Burger. But it all made sense after we read the description.

We did not eat there that day, but please chime in if you have. We’re told it’s just bar food; but sometimes that can hit the spot.

Red Dragon ended up on our agenda between breweries.

When Rob and I said we hadn’t, we all knew that was going to be our next stop! Because the Wondrous Punch packs, well… a punch, Sally suggested we order just one to split among the four of us.

But the boys wanted their own.

There is just one word for this drink: boozy. I’m glad we ordered just the two otherwise no one would have been able to get us home. Rumor has it that there is a two-drink limit when it comes to the Wondrous Punch at Red Dragon. We’re also told that the food is pretty decent, too.

Both Tony Jaros and Red Dragon are cash only establishments. It’s funny, because I recently read this article about how Cash-Only Restaurants Must Die. But like New Orleans, we’ve found that many dives are cash only. I’m not sure that will change. Despite the fact that we prefer to pay by credit card to get the miles, I think dive bars will always be able to get away with a Cash Only policy.

I never thought about dive-bar hopping before! But it was spontaneous and fun. We tried some new-to-us places and made some memories.

What new place have you introduced to a friend lately?

What kind of spontaneous adventures have you had as of late?