Also, Happy Birthday to my “little” brother, JR! That’s in quotes because although my brother is three years younger than me, he is about 10 inches taller! Rob and I sent him a little something, in hopes that we can take him to a few breweries when he is in town next month: 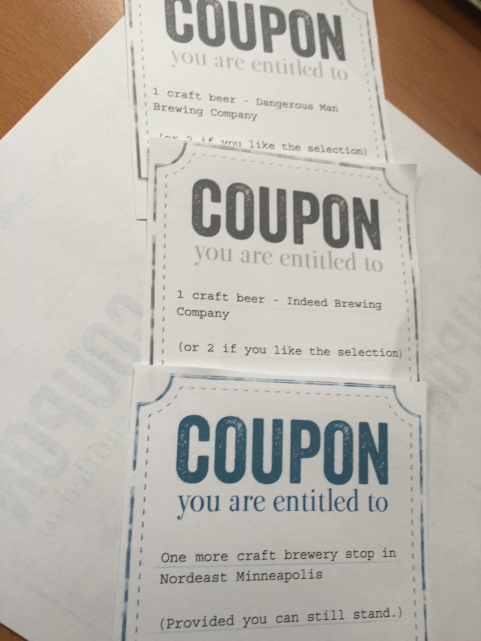 And that brings us to another Nordeast Minneapolis brewery this week! Today, I’d like to introduce you to Insight Brewing Company. 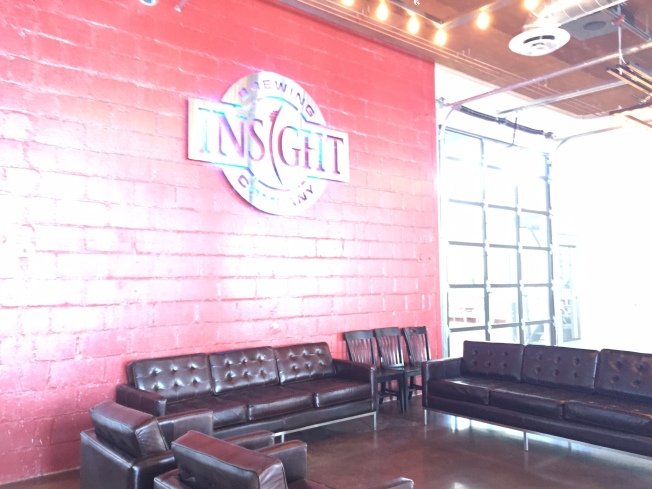 Maybe they intend to turn it into a restaurant/brewpub down the line? Whatever the case, there really was some foresight there.

The beer prices are posted high and are easy to read if you are standing in a line behind the bar, as are the types of beers available.

I love that so many breweries collect growlers from other local brewers! The collection is displayed wonderfully here, as shown in the photo above. And if you look between the two rows, just above the door, you’ll see that when we were there, they craft their own sodas, too! Dangerous Man does this as well. I love that option when I’m the one driving, because I still get to try something interesting!

Insight describes itself as a “globally-inspired” brewery, probably because founder Ilan Klages-Mundt has spent so much time working in breweries around the globe.

Want a little more detail on the beers? Check ’em out.

The beers on this menu during our first visit had a very British feel to them. The Lamb & Flag, as I learn from a little more research online, is an English-style bitter. This makes sense because Ilan spent much time working at Fullers Brewery in Chiswick, England. It’s also probably why there is a Chiswick Porter on the menu, too. That was my first taste, and let me tell you that it is spot on in style. I’ve been drinking so many American porters as of late. So this was a refreshing change of pace.

Now that I look back, I’m surprised Rob did not get the Lamb & Flag. Fullers ESB was Rob’s favorite beer when I met him! Instead, he ordered the unique Yuzu Pale Ale.

This is where Ilan’s work in both British and Japanese breweries collide. Yuzu is a Japanese fruit with citrus characteristics such as those of grapefruit and madarin oranges. The flavors are subtle in this pale ale, a common style found in any British Pub.

I thought that our bartender {which we later realized was Ilan!} told us that they tap a Firkin every Saturday at noon. But I think I have mistaken. Unless it is a secret only insiders know, I cannot find that on their website or social media.

What I did find is that they tap a Cask every Saturday at 5pm. I thought a Firkin and a Cask were very different things. Maybe they aren’t and I’ve just got the time wrong. It was time to do some research!

Here’s what I found almost immediately:

To start with, let’s clarify this; When you hear the word ‘cask’ referred to, it is an inclusive word that doesn’t immediately tell you anything about the size of the actual beer vessel, but just makes reference to the fact that it contains cask-conditioned beer. So when you hear that a bar is tapping a cask of something, they are likely tapping one of two different sizes of cask, and those are referred to as a firkin or a pin.

A firkin is much smaller than a keg, usually around 10 gallons. That is why you need to get the beer before it is gone! I would like to stop at Insight for a Cask/Firkin-tapping at Insight sometime. Let me know if you want to join me!

On our second visit, we came home with a Growler of Curiousity IPA – a solid one, I might add. Do you know which is the REAL Growler in this photo?! 😉 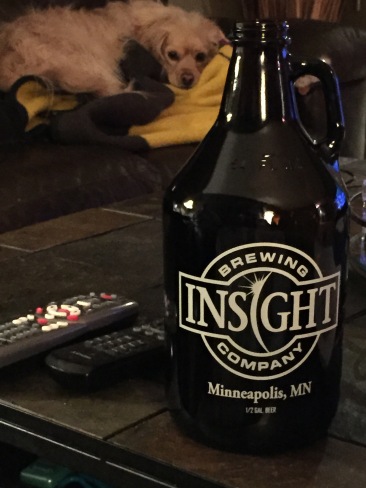 Are you a fan of English or British-style beers?

Have you ever had a specialty beer that was made in a small firkin-sized batch?