It’s time for another installment in my Minnesota Brewery series! Next up is yet another Nordeast Minneapolis brewery. I’m telling you, NE Minneapolis is a great area for a brewery crawl because there are at least a half dozen breweries within 5 miles from each other.

We stopped into 612 Brew on a very cold {waaaayyyy below zero}, windy day this winter, with a Groupon in hand. I love when deal vouchers offer beer flights to local breweries!

We walked back down the icy sidewalk and watched a guy slip and almost fall flat on his ass before catching himself. I shuffled my feet as I sheilded my face from the wind as best as possible. Then, we went back to the parking lot and followed the building around back to the other side of the building. Entrance food! The outdoor space here, I’m sure, would be lovely in the summer; but I wasn’t really paying attention.

I was so happy to be inside! The space was very nice. I really liked the taproom and not just because it was warm! 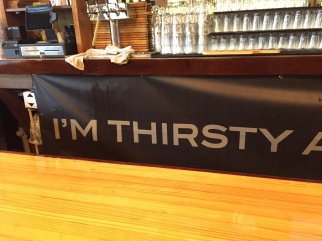 Now you see why I was happy that a couple of pint glasses were included in our Groupon!

For those who are not local to the Twin Cities, 612 Brew gets its name from the Minneapolis area code. A couple of years ago, I read that a brewery called 651 Brew was opening up in St. Paul. I haven’t seen anything since, nor can I find anything now. Perhaps that was posted on April Fool’s Day.

Like many other breweries, 612 Brew hosts food trucks. While there wasn’t one on the day of our visit {there was no crowd and it was so cold!}, you can check the 612’s online calendar to find out who is on site.

The beers on tap that day:

Only the top four were included in the flight. The bummer was that we didn’t really like any of the beers! {We had heard a simliar experience from friends.} Of them all we liked the Rated R Rye IPA best, but even that was one we would not order again. And we love IPAs and porters!

I wanted to try the Wild Rice Dunkel because I love when local breweries include something unique or regional about their brews. Wild Rice was a new one for me! I was excited and chose it for my free pint. Sadly, I didn’t like it and couldn’t even finish it.

Despite the lovely taproom, the great outdoor space and the bike-friendly access, the beer just wasn’t up to par with what we are used to drinking in the Twin Cities. But that is just what our palates say about these beers. You should still give 612 Brew a try to judge for yourself.

Name a unique beer you’ve had that was infused with something or that reflected its locale!