The first time Noodles and Company introduced their 500 Calories or Less Cheat Sheet, I was hooked! There were dozens of combinations of menu items that allowed me to make better choices. It also encouraged me to try new dishes that I might not otherwise. Some became favorites. I love Noodles & Company, but don’t really get there very often now that my friend Stacy doesn’t live near me anymore. 😦

Recently, Noodles upped its game by introducing something they call Buff Bowls. With the low-carb, gluten free and paleo lifestyles still in full effect, it was a smart marketing idea. I do not necessarily/purposefully practice any of those habits, but I was still intrigued. Lots of protein and veggies? Low-cal? Flavorful?

What is a Buff Bowl?

They are essentially the same pasta dishes on the menu, except:

Here are the current Buff Bowl options listed on their website:

We tried them and here is my answer:

Ha! It really depends on how you look at it. Here’s a look. Looks like a salad, no?

There is really a lot of spinach there, which I don’t mind. In fact, one of my favorite salads is the Spinach Salad at the Roasted Pear. I am never dissatisfied when I order it! I also make spinach the base of all my Power Bowls. But Rob thinks this amount of spinach is a little much.

The other thing that wasn’t really spelled out is if Buff Bowls are served warm or cold. Cold = salad, for sure.

But the dish is warm. It’s warm enough to make it less of a salad {or more of a warm salad?}, but not enough to make the spinach all wilty. If you want wilted spinach, you can pop it in the microwave for a bit.

Also, it seems all of the sauce and other good stuff goes to the bottom. Rob had a brilliant idea: Shake it up! I put the lid back on my Buff Bowl, shook it vigorously and came up with this:

That did the trick! It’s much better than trying to mix it all up with a fork.

Another question I had was if these dishes were locked in with that protein indicated on the menu or if they were merely suggestions. Rob picked up these bowls the night we were waiting for the Buggles to be dropped off for their week-long stay. 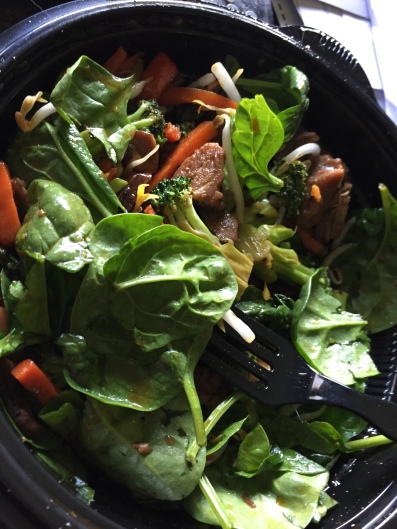 He said that he was specifically asked what kind of protein he wanted for each dish! So I supposed if you really wanted sauteed shrimp, they wouldn’t bat an eye. That’s good to know.

Rob wasn’t completely enamored with the steak in his dish. Once upon a time, we loved the steak in the Steak Stroganoff, but we think they changed their source a few years back. He’d love to try the naturally raised pork next time.

We love the concept of the Buff Bowls. I am impressed with Noodles for taking this on because I’m not sure it is an economical venture. They can make quite a profit with noodles. {There is never enough protein and veg in those bowls that I want!} But spinach? More veg? Extra protein? That can’t be cheap move.

The Tuscan Fresca sauce was tangier than what I had remembered from the noodle dish, but maybe that’s just the way it tastes without the pasta to soak up the dressing. I’d still like to try the other Buff Bowls.

If this Buff Bowl campaign succeeds, I’d like to see Noodles and Company do something similar, but more of a stir fry: more veg, less {or sans} spinach, no rice. Thoughts on that idea?

Have you tried a Buff Bowl yet?

What were your thoughts?

What do you think – essentially a warm salad?