On Mother’s Day, after the crew returned home and we tidied up the house, Rob decided we should spend the beautiful afternoon on a walk… followed by dinner. He chose Roat Osha Thai in Uptown Minneapolis for two reasons: its proximity to the Lake of the Isles and because he checked my blog for half-price wine night!

It was the perfect day for a semi-leaisurely walk by the lake. There were very few people out, perhaps spending the time with their mothers instead. And although I took no photos, I enjoyed the nature to its fullest. We saw a beaver skirting across the water! I’m pretty sure that’s the first one I’ve seen in real life. I kept hearing the same birdsong over and over and inquired what bird it might be. Somehow, some way, Rob knew it was a red-winged blackbird. Sure enough, I saw many of them during the rest of our walk. And we saw at least two sets of goslings with their parents. They were still fuzzy and yellow and the smallest I’ve ever seen!

It was a perfect afternoon.

After the almost 3-mile walk around the lake, we took the couple blocks over to Roat Osha on Hennepin Avenue.

It was Happy Hour, which meant two dollars off all taps!

Instead of original plan of ordering a half-priced bottle of wine {they only offered select bottles}, I had my first Loon Juice! {See the tap handle on the far right.} Loon Juice is a local Minnesota cider from Four Daughters Vineyard and Winery. It is a dry one, so I think it would go perfectly with some fresh Thai food!

Rob on the other hand, wanted to go with the Surly Smoke. 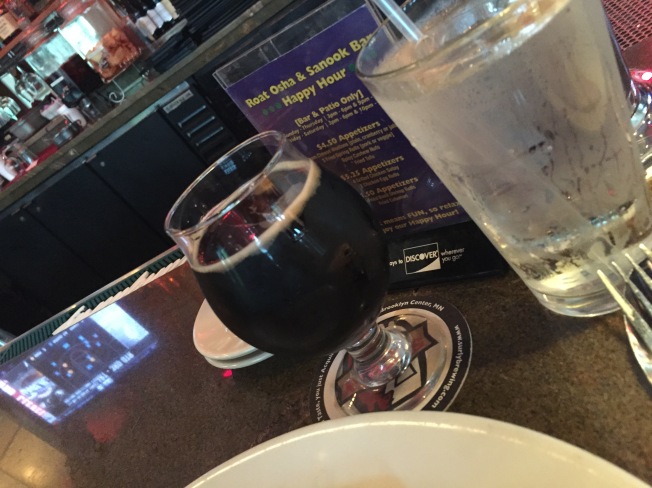 I warned him not to order it. I recalled trying it once at Buffalo Tap. I didn’t like it because it is exactly what it is supposed to be – smoky. And I really am not a fan of smoky flavors, whether it be in food or beverages. I didn’t recall Rob liking it either; but he ordered it anyway. Then..

“Remind me never to order this again.” he said.

I think that’s what he told me the frist time.

For the record, Surly Brewing Company is a great local brewery that paved the way for all of the craft breweries we have in Minnesota today. To be fair, there is nothing “wrong” with the Surly Smoke at all, especially if you like smoke. It’s just that I don’t.

Since we had such a big brunch that morning and I wasn’t entirely all that hungry, we decided on a few Happy Hour apps. We started with these to share, which we ate half of before I decided to snap a photo:

Rob had read somewhere that Roat Osha has the best cream cheese wontons. They’re not something we order very often, but we did here for that reason. We ordered the cranberry version, something our beloved Nha Sang offers, too! We liked these just fine, except that there was a little too much wonton before you got to the cream cheese. I have no complaints for the price point! We each enjoyed two. Then… 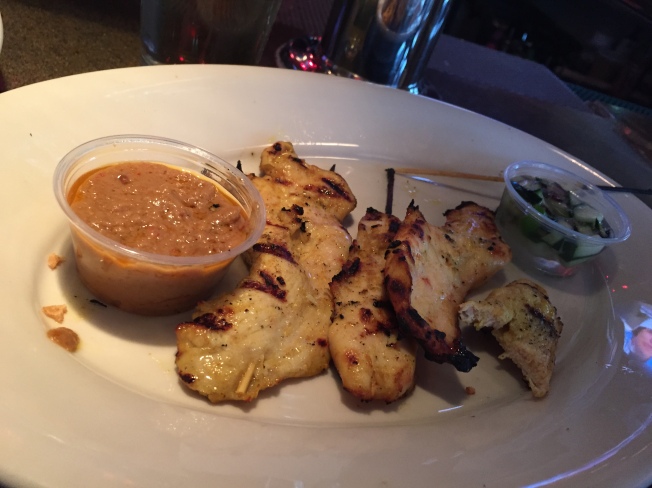 These were just what I wanted! I had not had chicken satay in so long! I was not familiar with the vinegary, yet syrupy cucumber dipping sauce on the right, but I thought it was tasty. However, I really enjoyed their homemade curry peanut sauce, so the sweet cucumber sauce went by the wayside.

Halfway through these skewers, I started to get full.

I was so glad I hadn’t ordered a full entree, despite the fact that everything that came out of the kitchen looked fresh and smelled absolutely delicious. At first, I had ordering remorse. But my small appetite quickly brought me back to my senses.

Now I have a reason to go back for a dinner entree! Since I get so stuck in a rut when it comes to Thai food, I think I’d go to Roat Osha, sit at the bar for an hour, watch all of the dishes come out to the other patrons and then order the one that looks and/or smells the best. Yes, that’s going to be my new method of ordering new-to-me food.

At the time of this writing, Roat Osha offers half-priced bottles of select wine on Monday, Thursday, Sunday from 4pm to close.

What is your favorite Thai dish?