For our 5-year anniversary, I bought my husband a little surprise… a brewery tour of Lake Superior’s North Shore!

We went this past Saturday and I must tell you, I can’t thank the Get Knit crew enough. Well, sit back because I’m going to recap here whether or you like it or not. Maybe you’ll discover a little day tour for yourself!

I had been eying this tour for a long time. I didn’t actually sign up for it until after our anniversary in April because it wasn’t until a few weeks later that everything just fell into place.

What? You mean the traditional 5-year anniversary gift isn’t beer?!

Rob and I have been talking about doing a tour of breweries in Duluth on our own for a while. There are some great up-and-coming breweries there. It wasn’t until a couple months ago that we had our first taste of a Bent Paddle brew when a friend brought over for their Cold Press Black Ale to our poker night and left one for us to try. {Thank you, Chief Bieber!} We know. You’re jealous. Come to poker and you’ll get your own nickname, too.

There were a few reasons why we hadn’t made that trip to Duluth yet.

I can’t quite remember how I discovered Get Knit because I subscribe to so many local newsletters; but I’m glad I did. They are a tour and event company whose premise is to bring the people, local businesses and community together. They offer day long trips like this or other local events throughout the Twin Cities. I wouldn’t hesitate for a second in recommending them.

For just $119 per person, the North Shore Brewery Tour included:

Yes, we got the Special Edition Ticket for May 30th: 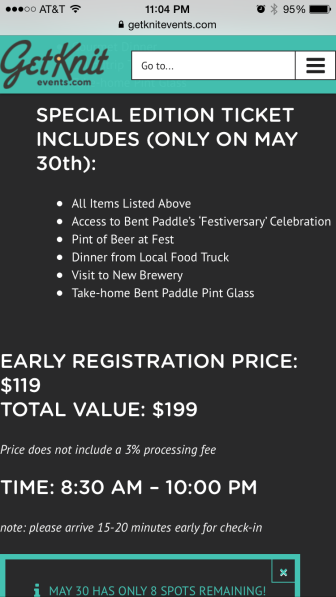 I’d call $119 per person a steal for a full-day trip to breweries where everything is included!

Let me just tell you… Get Knit thought of everything for this event, right down to the smallest detail.

The morning of the event, I was debating whether or not to stop and get a good coffee on the way to the Roseville Park & Ride where we were meeting. I’ve been on enough tours to know that the hot water with mix-in instant coffee packet doesn’t cut it for me. (SNOB!) But then I worried about the two hour + drive north and thought about how I would have to peeeeeeeeeeeeee…

Instead, we dropped Sophie and Sham off at the Buggles’ house before heading to the meeting point. Upon arrival, we checked in and… Wait a minute! Two of guides were the same two that did the Living Social Beer Trolley Tour back in 2012! After Living Social Adventures went defunct, a bunch of those who worked for them branched off to create their own local company. We knew we were in good hands.

Breakfast was included in this tour and included bagels and coffee. The bagels were not set out piled on a platter, but put into individual bags, labeled and pre-sliced. All one had to do was slather on cream cheese if they so desired.

Here’s my last bite, ’cause I know you wanted to see it.

Coffee was from Five Watt in Minneapolis. This coffee made me feel spoiled!

{aka… This is how every tour should start.} 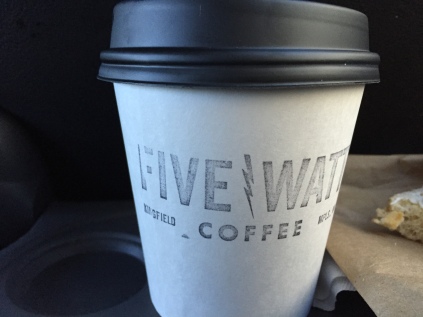 About a half hour or so on the road, the crew came around to pour us more coffee. Isn’t that sweet!?

I did help myself to that second cup. This was all because this bus had a restroom on board. Oh, and did I mention there was free wi-fi? Yes, they thought of everything.

Here was our itinerary for the day: 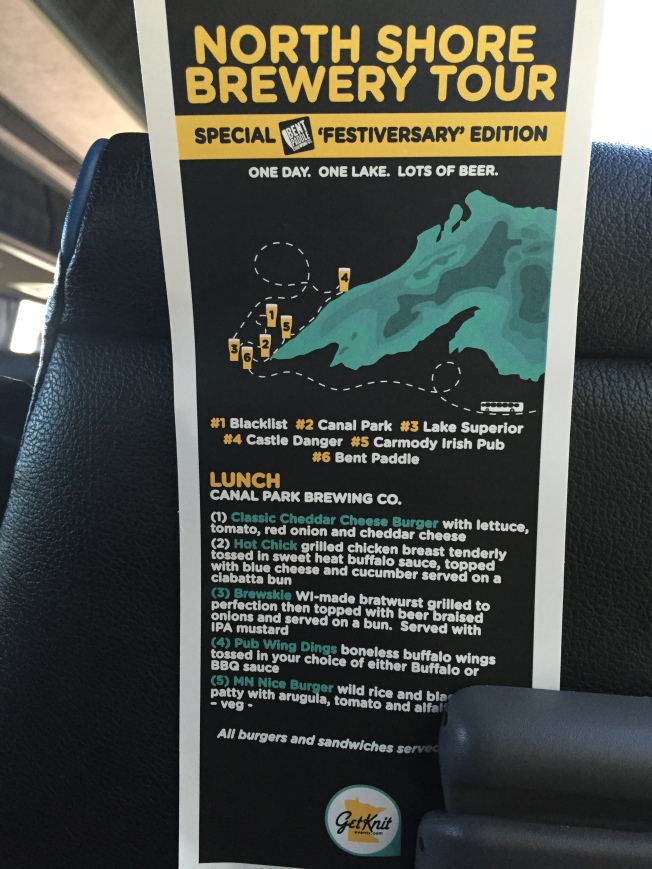 There were no cares in the world, nothing to worry about… just time to enjoy ourselves. Rob said he wished he would have brought a book for the ride up. Most people were chatting or playing around on their cell phones and tablets. I didn’t want to waste precious battery life because I knew I had a lot of pictures to take. {Little did I know that there were outlets to plug in devices throughout the bus!}

Our first stop was a brand new brewery to the tour. I’m so glad we stopped there! Blacklist is known for their artisan ales which clock in around 9-10% ABV. Boy, were we starting off strong! They had beer waiting for us…

One of he things that made this brewery special to us is that it’s a place we would have never considered if we had put a trip like this together ourselves. 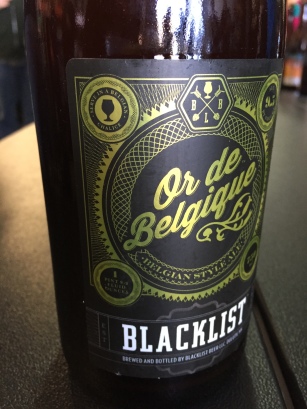 Rob has never been a fan of Belgian Beers, with the exception of Kasteel Rouge and anything that Dangerous Man produces. So it is rare that we go to breweries that specialize in Belgians. But, oh, was he surprised by this one! I absolutely loved this flagship Belgian Style Ale called Or de Belgique {Gold of Belgium}. When I expressed to Rob how much I enjoyed it, he confessed that he truly did, too!

We also tried their Imperial Hefe. I didn’t like it quite as much, which surprised me because I love wheat beers. But perhaps the two should have technically been served in the opposite order. I really don’t know. Still, I completely understand why we had the Or de Belgique first. Who wouldn’t want to open with their flagship beer?!

The Or de Belgique is the base of nearly all of their beers with which they experiment and add flavor. They let us take a look around their space and we found some very exciting, interesting, new-to-us beers that we’d love to try!

I’m a sucker for a good Lambic, but honeysuckle? Am I dreaming? 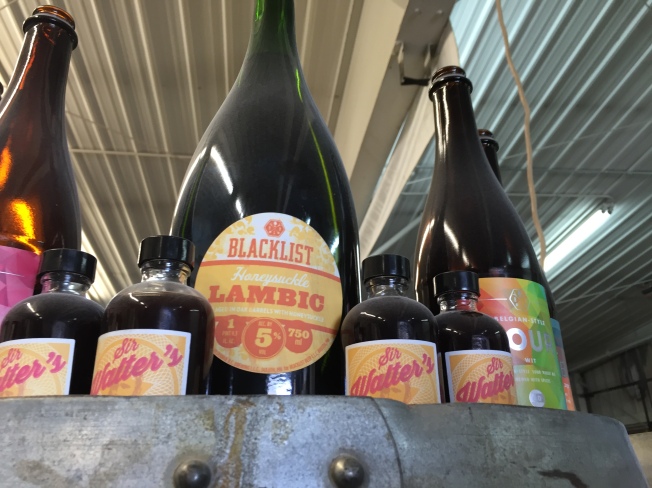 Have you ever had a beer brewed with makrut lime leaves or rhubarb? Me neither! 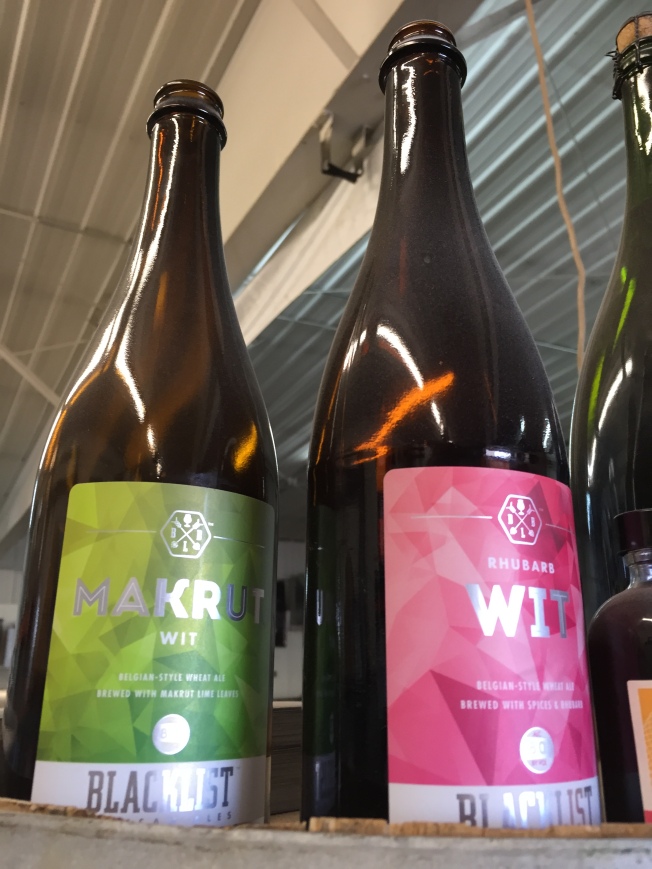 Or how about one brewed with green tea, lemongrass and honey? 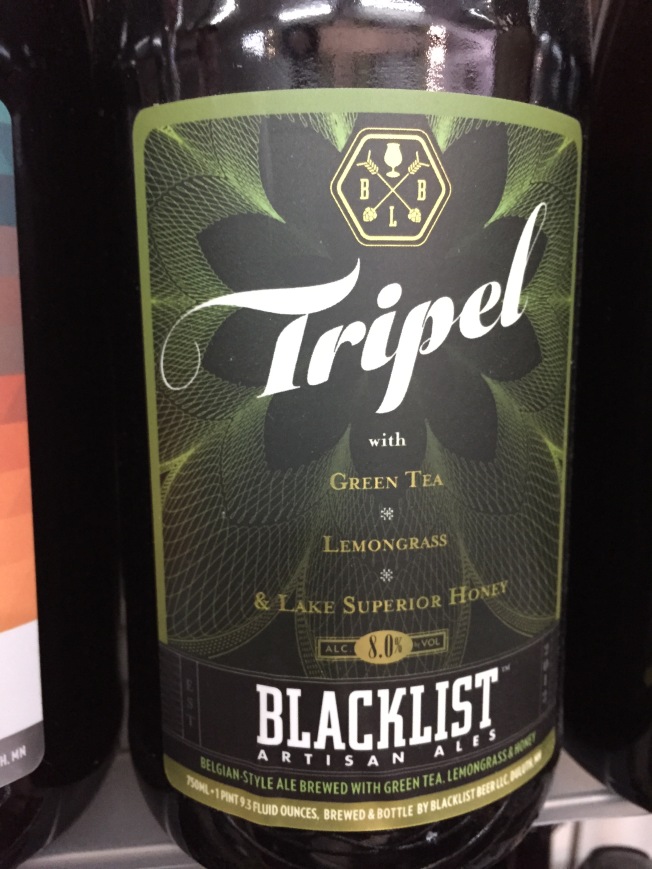 We had to ask about this one… because, well… Coconut. Cocoa Nibs. Rum Barrels…

The brewer wished us luck with finding it because they like to age their beers (like wine!) and he doesn’t even have any for his cellar.

Another beer that interested Rob, but of which we did not get a photo was their Imperial Spruce Tipped IPA with Fennel. Rob inquired about this one and we were told that they are getting ready for their next batch to come out this fall because they just picked their spruce tips.

Yes, they do everything themselves, including distribution.

But Brian the Brewer said that spruce tips cost $70/lb! There is no way they were going to pay that when they could pick it themselves. Then he showed us to the freezer and pulled some out. 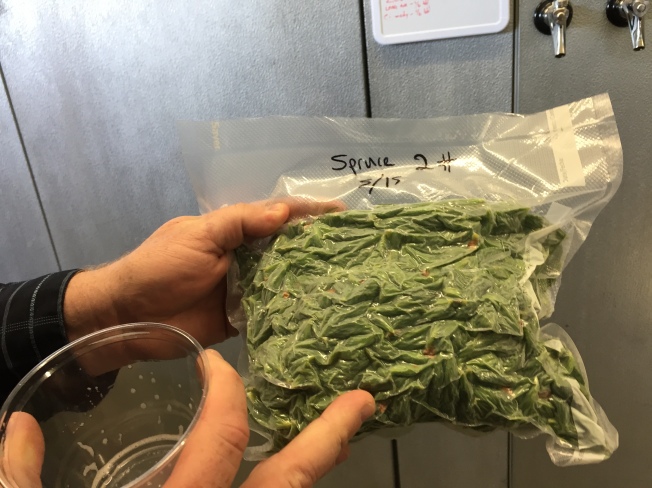 That’s the way Blacklist is described on their website.

“So why Blacklist?” was my question to the brewers.

They answered me thoroughly; but my memory failed me to describe it so eloquently as they did. Luckily, I found them quoted on Duluth News Tribune:

The beer changes over time. We use artistic elements and are inspired by a lot of things to produce our product. There is a brewer’s legend: if you brewed with a wild yeast, different organisms, or ‘bugs’ for mass production, then you would become blacklisted from stepping into a big time brewing production because of this contamination.

So, we called ourselves Blacklist based on this.

Who can’t love that philosophy? They are always brewing small batches. And to be quite honest, in my experience, those breweries that do tend to brew the best beers.

Their beer locator is the best I’ve seen. Not only can you search for Blacklist beers by zip code, but you can also specify product. {The Coco Noir pulled up nothing. 😦 } It’s time for Rob and I to get experimenting with these Belgian brews. Please bring more to the South Twin Cities Metro, Brian and Jon!

We had a lot of time to talk to the brewers and sip what they had poured for us. But we couldn’t buy anything because they are not yet a taproom.

Oh. And then there is polka. There must always be polka.

There was also time to get a selfie with the beautiful Lake Superior in the background. Or not…

Yes, we are huge fans of Blacklist Brewing now and all that they represent. Their vision is to have their own space to host parties and such because there beer is s celebratory experience meant to be shared. I remember the first time I went to Belgium thinking, “Wow, the Belgians treat their beers like the French treat their wines!” I feel like Blacklist wants encompass this tradition, yet experiment and keep the beer, well… crafty. It’s something unique that I haven’t seen any brewery do before. I love it.

And that was just one stop of our North Shore Brewery Tour! Since this post is getting a little long, I’m breaking it up into three parts. Come back next Thirsty Thursday for Part II!

If so, what’s your favorite?

If not, what’s your favorite style?