We woke up from our lengthy nap feeling mostly refreshed. It was time to go out for dinner. Rob had been craving Italian food all day, such that he asked everyone he could where we could get the best Italian in Traverse City. The answer was unanimous: Trattoria Stella.

Unfortunately, our plan was to stick downtown and walk away the evening. So we skipped it. But in retrospect, I wish we hadn’t! Instead, we popped into Sorellina, which was a stone’s throw from our hotel.

Happy Hour was on all night in the bar. So we bellied up to it and ordered some mediocre wine. These were also on Happy Hour:

They were a bit greasy, so I had only a couple. I wasn’t really feeling hungry quite yet, nor really in the mood for heavy Italian. So I ordered a tiny Caprese Salad, which if I remember correctly, was also on Happy Hour.

It was fine, nothing special. Rob, on the other hand, was still in in the mood for Italian, so he ordered a big bowl of good ol’ pasta. 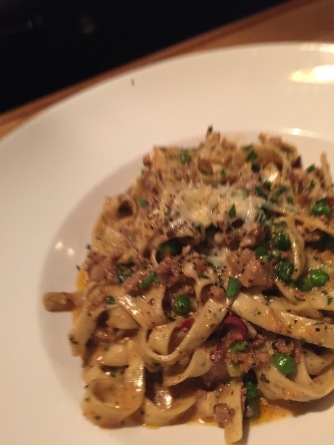 Fettuccine Carbonara – with sausage instead of chicken

He liked it a lot, but I thought it had an odd flavor to it. Maybe I just wasn’t feeling all that well.

After dinner we walked over to 7 Monks Taproom, of which we had heard wonderful things. A bar with 46 beers on tap sounded right up our alley.

The sad thing is that of those 46 beers, there was very little that was interesting on tap. They were mostly your usual suspects. In fact, you’ll notice that the taps in the photo above aren’t actually beer taps. They are for wine and mead. Match some names below:

The cider/mead/wine menu now intrigues me, but that night I wasn’t feeling it. We eventually did find a beer to sip. It’s the New Belgian Cocoa Molé I once had at the Happy Gnome! I have only had this beer twice before in my lifetime. So I Savored. Every. Drop.

Have you heard of a Crowler? I hadn’t until I saw this sign. We didn’t get one, so I can’t tell you how they work.

I was more interested in checking out the Low Bar, just downstairs from 7 Monks Taproom. I think the two are affiliated because there was advertising everywhere at 7 Monks {like in the photo above}. It’s the only way we would have known about it! 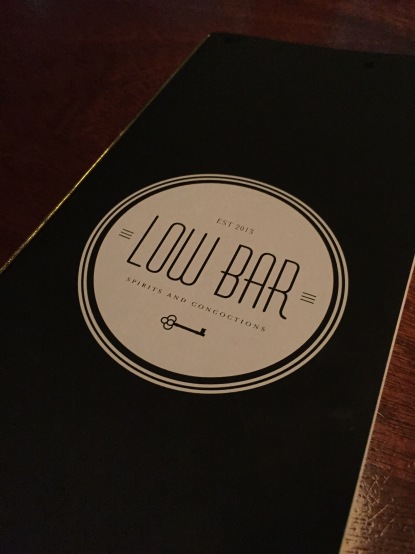 This ended up being my favorite stop of the trip! It was dark, cozy and a bit swanky. Luckily, it wasn’t too busy at the bar; so we pulled up two seats. 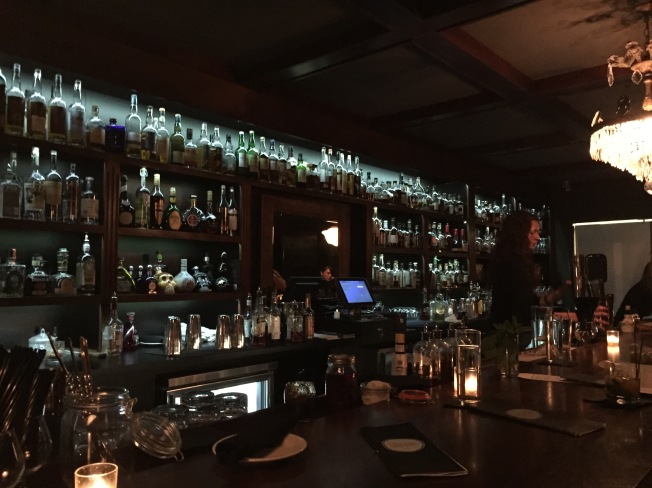 Then there were more decisions to be made… 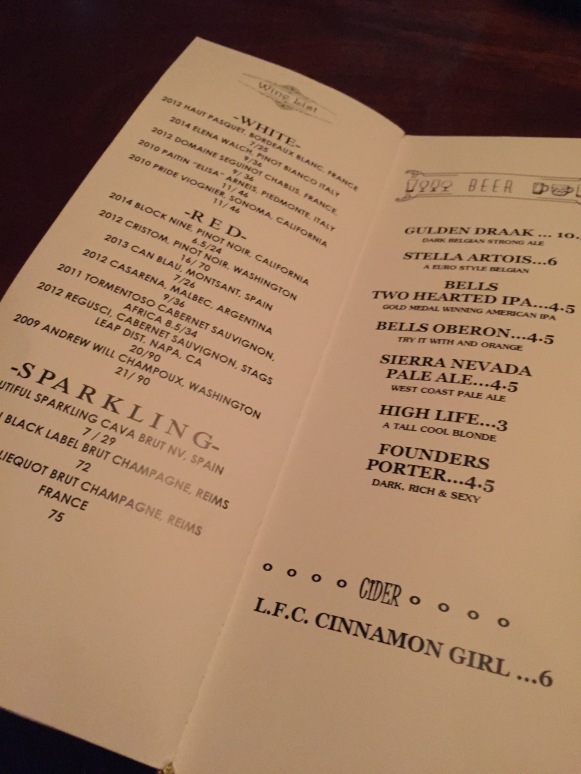 Well, I narrowed it down a bit because we were in a craft cocktail bar. It was the place to get a cocktail! 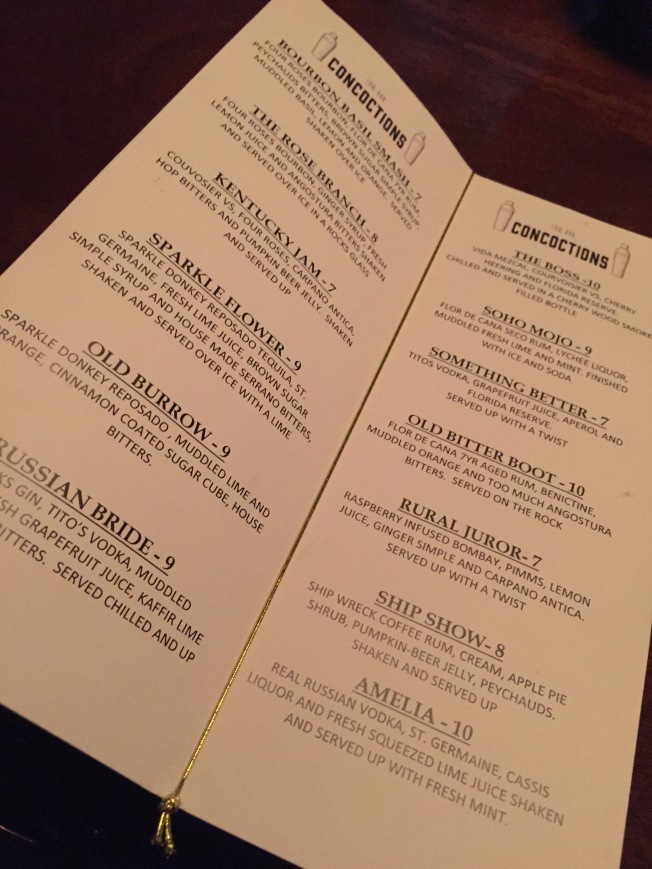 At this point, I was finally starting to get hungry. Like, really hungry. Now it was time for that cheeseboard!

Yeah, that was the ticket.

Not too long after, we met some Canadians who come to Traverse City often. They said they had to come back to the Low Bar get this drink:

THE BOSS – Vida Mezcal, Courvoisier VSOP, Cherry Heering and Florida Old Reserve. Stirred and served in a cherry smoked bottle on the rock.

So here’s how it works. The concoction is made and then emptied into a bottle, after which smoke is added: 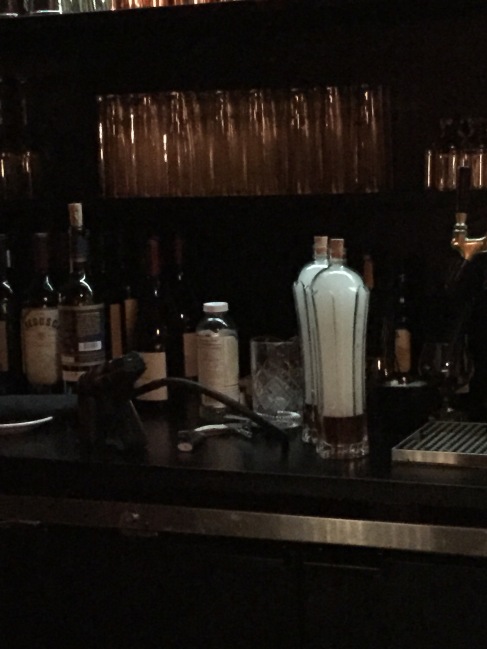 It was very dark in there, but Rob insisted I take a video. I got YouTube to enhance it a bit, but it’s still not the best. You get the idea. I find this funny though: You can hear me say, “I can smell it!” and Rob say, “You got the best drink ever!”

Once they plug the bottle, you can lay it on its side for a while for the smoke to really infuse the beverage.

After it has been infused to your liking, you pour it over the large cube in your glass. It’s a spectacle, but tastes yummy, too. I prefer it with less smoke; but that’s just me.

Our new Canadian friends invited us to meet them at the Union Street Station after we had finished at the Low Bar. They said that it’s where the locals hang out and there is live music. How could we turn them down?

What’s the most interesting spectacle of a drink you’ve had?