I’d love to tell you that Sham and Sophie are back to being two peas in a pod and playing all of the time. But that is not the case. Sham still looks at Sophie longingly and Sophie still refuses to play. I wish everything would go back to the way it was. Or I could figure out just what happened for Sophie to not want to play with Shamrock ever again…

In any case, they are still loving their BarkBox!

They both know the word BarkBox now just as well as they do treat! And when I open it, paws ultimately end up on my lap. 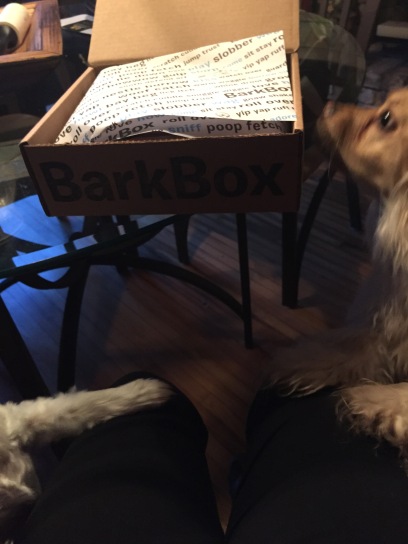 What does that even mean? I didn’t even think about it much longer because the pooches were just so anxious to tear into the box!

The Squash is like a KONG, in that it’s a durable rubber toy that you can stuff treats or peanut butter into. I’d kind of forgotten about our dogs’ KONGS, as they’ve been stuffed away for some time. I’m not even sure if Sham’s had one! The last time we’ve used KONG may have been back when we had Benny.

I was sure to rectify that this weekend! In the end, Sophie was sure to get every lick of peanut butter out of her KONG and then turned and took Sham’s leftover Squash. I think he’s not so sure about that thing.

As for this month’s treats…

I love a company that gives back. And S&S loved these treats!

There were two chews in this month’s box! 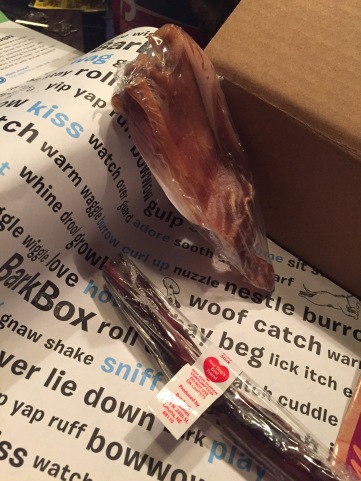 This meant that they each could have one and I didn’t have to save one until next month. After opening, I let Sophie pick which one she wanted. She pranced around the house with it without even chewing it for a while!

You see, Sham is a fan of little tennis balls. He also is fan of little soft toys that are the size of a small tennis balls and chews on them gently. That is why we have another name for Shamrock – Mr. Nibbles!!

What makes this toy so wonderful is that the three little peas come out of the pod.

It was actually Finnegan that discovered Sham liked the innards of these types of toys so much. One year, they got a Cornucopia in the BarkBox, which I didn’t post on for some reason.

Sham played with it a little bit. When Finnegan was over, he was a little less gentle and got all of the veggies out of the cornucopia! We didn’t even realize that they came out!

Sham is now in love with those little plush pieces! We would have never known that those pieces separated from the cornucopia if it weren’t for Finnegan.

For the record, the peas {out of the pod} are strewn all over the house, most likely under the couches at the present moment.

I hope that the December BarkBox arrives before we depart for Green Bay for Christmas. We have a tradition of wrapping it and giving it to the dogs after everyone has opened their gifts.

In fact, a BarkBox makes a perfect gift for all of the pooches and doggie lovers in your life. Here are all of the ways you can give…. 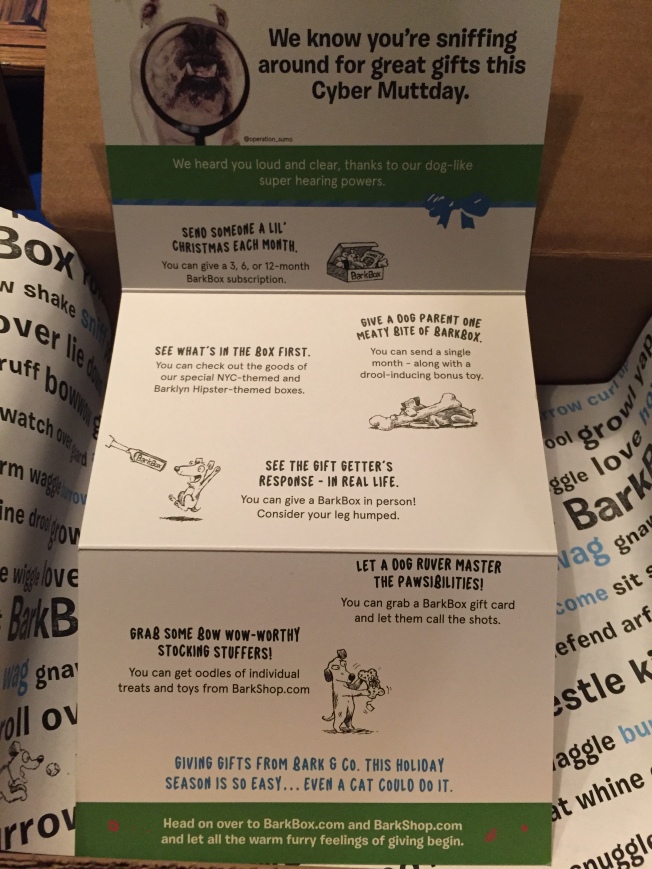 Cyber Muttday? Good one. Also, if you click Sophie and Sham’s referral link here, BOTH you and they will receive a free month of BarkBox! We’ve had the box for over two years and it’s the only subscription box we haven’t canceled. In short, we love it.