Amidst all of the culinary trends of today, several new Italian restaurants have popped up recently in Minneapolis. Eveyone has had Italian food. We do love Italian food, but the fresh, simple kind. And that’s what it sounds like most of these new restaurants are leaning towards! It’s hard to revamp such a classic cuisine without ruining it completely.

We have every intention of trying them all…

{Okay, wait. We tried that last one for a Happy Hour. It was killer. And I didn’t write on it. That’s an excuse to go back – for fresh thoughts!}

With so many new places to try,

sometimes it just takes a Groupon to get us there.

We made reservations to Parella to use our Sunday Brunch Groupon the day after a Holiday Party. Seriously, it was the only thing that got us out of the house that morning! 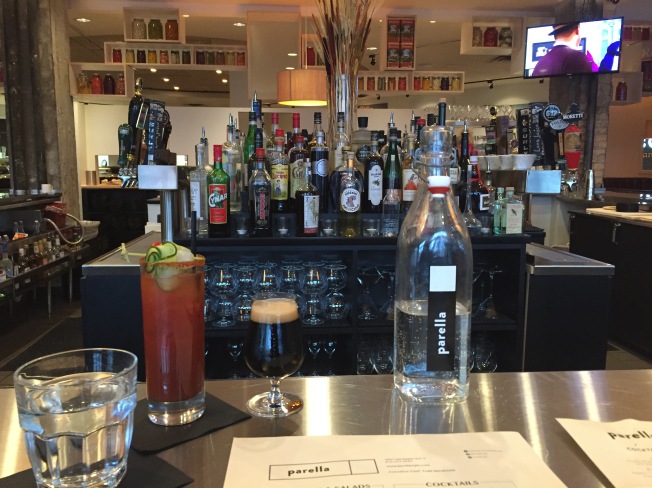 Although we had reservations, we parked ourselves at the bar. Our Groupon included a choice of Bloody Mary, Mimosa or Bellini. Obviously, I chose the Bloody Mary by the photo above. As much as I love cucumbers, it was a little too cucumber-y for my taste. The Bent Paddle Black Ale chaser made the world sing, though.

Check out the Happy Hour! 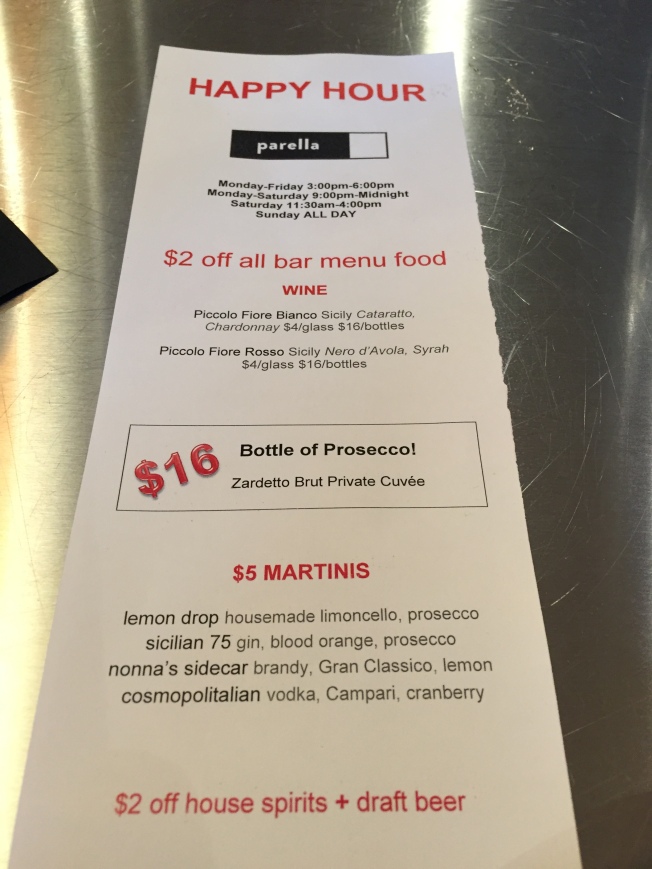 They are such good deals and HH available all day on Sundays. We had a Sicilian 75. Much better than the original French version, even at Arnaud’s.

Our Groupon did not include an appetizer, but this sounded so good we had to order it… 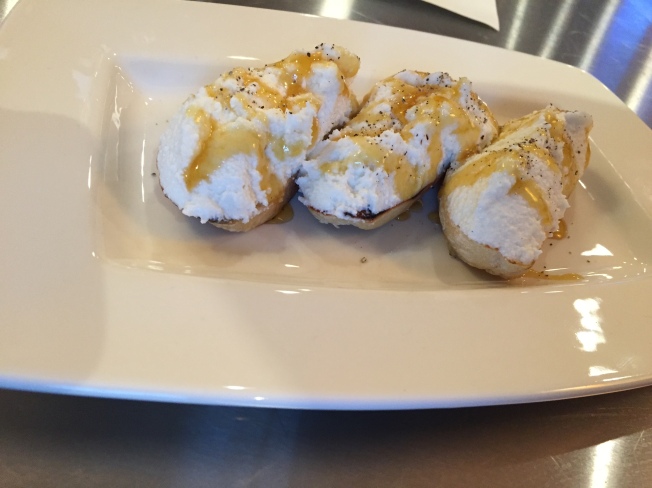 This wasn’t as good as we both had hoped. It could have used a little more honey. The ricotta to honey ratio was such that all we could taste was the ricotta. Rob didn’t like the “smoky” flavor, but I didn’t mind it because I knew it was from the grilled bread. It’s not something we’d order again.

Two entrees were included with our Groupon. I’m not sure that my dish is really Italian, but I don’t think brunch really is either…

My first thought about this dish when it was served was, “Well, they could have served this with some bread so I could soak up some of that sauce!” But truthfully, it didn’t need it.

There is sausage in this dish! I thought it said on the menu we received; but it says nothing about it online, which is the description I copied to caption the photo above. But now that I think about it… I don’t think think there was bruised kale and I don’t remember pinenuts… And, wait, that’s not polenta!

This is actually a different dish than I captioned!

My version of Cast Iron Baked Eggs had sausage, charred scallions, and a creamy sauce that is too die for. The perfectly-seasoned sausage covered the bottom of the skillet so that every bite had that goodness! Halfway through my dish, I offered Rob a bite. He immediately had ordering remorse. I’d get this again any day. Again and again and again. I finished the skillet.

Rob’s pizza was a different story:

The description sounded not only divine, but also breakfast-y. Still the result was disappointing. We both agreed that it was the worst pizza crust we’ve ever had. It tasted very much of unbaked flour!! If you are an Italian restaurant, you’ve got to get the crust right. Rob enjoyed the sauce, but the pizza as a whole was pretty boring with not much flavor.

Despite having probably the worst pizza we’ve ever had,

we can’t wait to return to Parella!

We loved the cool and modern feel inside, the spacious bar, the service, my incredible dish, the Happy Hour… Rob really wants to go back to try the pasta. I want to go back and share a bottle of Happy Hour Prosecco with a friend and nosh on the highly reviewed Misticanza Salad made with 20 herbs and greens. Oh.. and those eggs, again. Yes. Get thee to brunch at Parella before they change up those ingredients in the Cast Iron Baked Eggs!

Have you ever gone to a restaurant and had a bad dish but still had a strong desire to return?