I thought I’d heard some great things about this new-ish AZ-Mex restaurant in South Minneapolis. So when a Groupon became available for brunch, I immediately bought one!

The origins of the name… 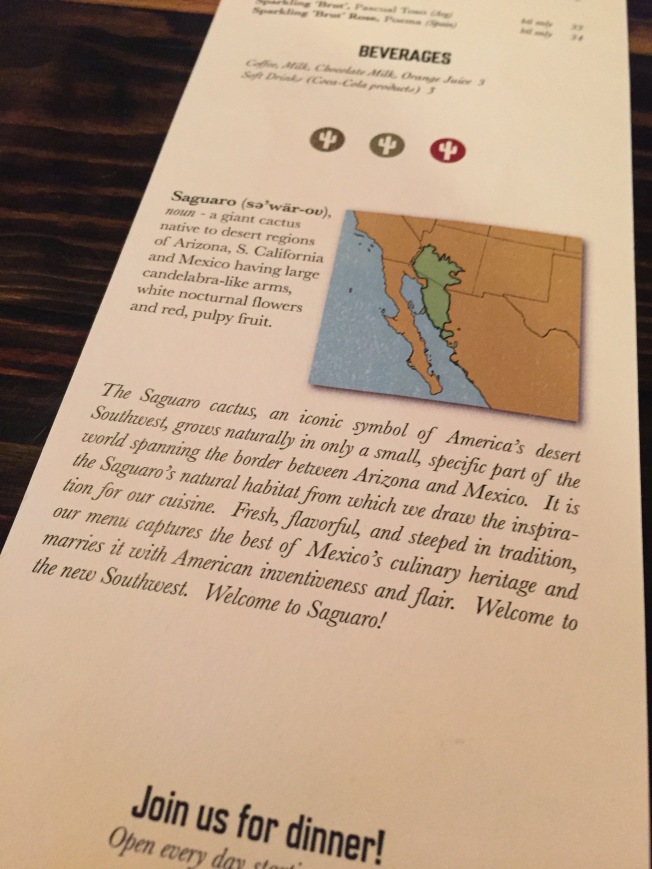 The menu sounded fantastic, somewhat similar to Sonora Grill – a restaurant I visited with girlfriends. I loved it, but never wrote about. That’s just what happens when time flies.

We arrived a little after opening to a tiny corner restaurant. Quaint, but not what we were expecting. There were two other patrons inside and I think only one more was seated the whole time we were there.

We pulled up to the bar and ordered some drinks. My Bloody Mary was pretty boring, so I ordered a Mimosa sans OJ instead. {Read: Just sparkling wine.} Rob’s Blood Orange Margarita was not bad at all.

Side Note: Saguaro seems to only have a license for wine and beer. Cocktails are made with sake, not vodka or tequila in our cases, here.

Still Rob jumped on a Surly Furious as soon as our bartender said that they were $2 all day long!

To be honest, our food was pretty bland. Rob ordered a steak taco thinking that it wasn’t bad. But it got better once he put some of their sauces on it. Their housemade sauces, Arbol Sauce and Saguaro Sauce, are found on every table. They are pretty tasty. But it’s almost as if they don’t want to scare people away with flavor so they leave it out of their dishes with the thought that you can just add your own.

My pork empanadas were very, very dry. I started to dip them in my egg yolks, which helped. Then I poured those yummy sauces on my plate and that is what made them the most edible. They were definitely overcooked. That guajillo sauce that I was dying to try was just drizzled lightly over the top; so I couldn’t really taste it, even before the other sauces I added.

Saguaro was okay, but we are definitely glad we tried it on a Groupon. We don’t need to go back when we have so many other places to try! In fact, it reminded me that I need to get back to Sonora Grill and bring my husband this time.

Have you ever had Arizona-Mexican Cuisine?