In this month’s edition of Girls’ Dinner Night Out…

I’m going to tell you about another time I enjoyed Chicken and Mac & Cheese.

Jen chose to drive us all up to Stillwater for what celebrechef {I’m pretty sure I just made up that word} Antonia Lofaso declared as the “Best BBQ Ever” on the Food Network. Those who frequent this blog may know that I am not a fan of barbecue sauce.

But Smalley’s Caribbean BBQ and Pirate Bar {don’t you love that name!} is known for its Caribbean-style BBQ. I just love jerk chicken. I was game!

Though we didn’t stop in the bar area, that was no reason not to order some cocktails! Argh! I had a sip of both Jen’s Pina Colada and Kim’s Dirty Wench. {Wait that didn’t sound right.} They were both the kind of drink that’ll take you away to paradise on a cold MN winter’s day. 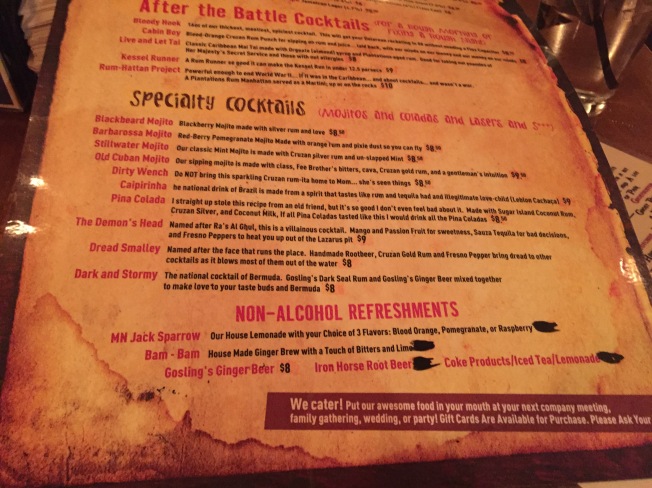 Me? I went with a beer brewed locally right in Stillwater – Lift Bridge‘s The Warden Milk Stout.

When I think of jerk chicken, I think juicy chicken seasoned with a dry rub. But apparently, there are several kind of Caribbean-style BBQ sauces, the Scotchies Sauce being the spiciest and most traditionally Jamaican. {It also is the runniest!} 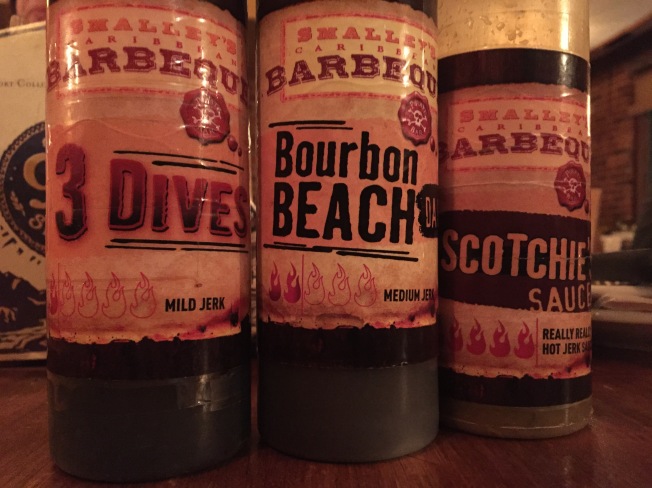 It seems you can get a tradtional housemade American BBQ sauce as well. {I did not try it.}

Jen kindly ordered us a side of plantain chips. And they were truly like chips – thin, seasoned and crispy. 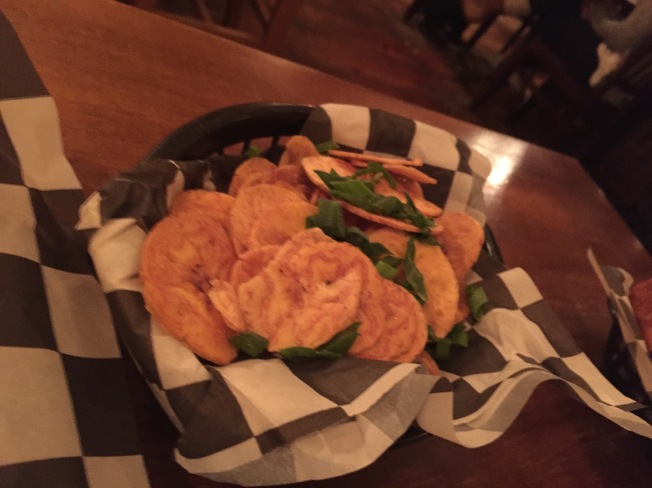 Jen was feelin’ all shrimp-y. Three skewers yields a generous number! Each meal was served with a nice hunk of cornbread with chiles. We also got to choose two sides.

Kim had a little trouble choosing, so she picked a barbecue combo to try more than one meat.

What is supposed to make this smoked chicken so special?

Yes, I decided the chicken was the thing I was supposed to order at Smalley’s! 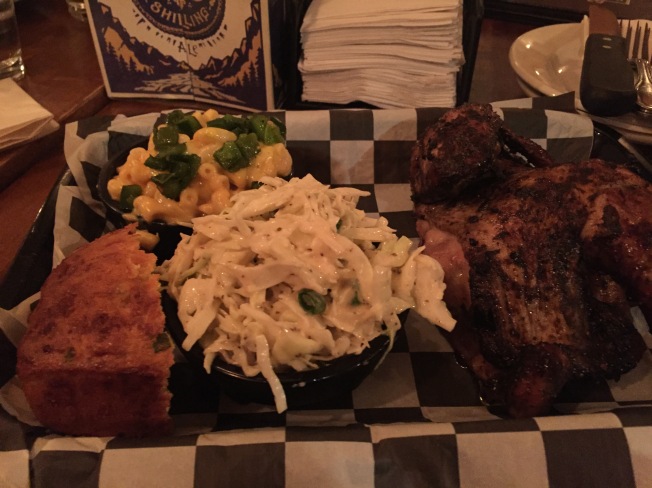 This was so much food! I am not sure that I even ate half of it. I liked that the chicken wasn’t too smoky, either, just tender and juicy. I enjoyed all three of the sauces with it; but of the three, I think the Scotchies was my least favorite. That’s not because it was spicy; because I like spice. It was just a little runny for a sauce.

I chose the mac and cheese because it was recommended by the chef here. My only complaint would be that I would have liked the chiles to be roasted, not just cut up and thrown on the top. The cole slaw had a nice kick to it with the horseradish, but I can always use a little more. 😉

Overall, we enjoyed our meals at Smalley’s. However, after having a to-die-for shrimp pasta on NYE at our favorite Sul Lago, these shrimpies just couldn’t compare. And while it’s surely less healthy, I think I’d chose Revival’s Tennesee Hot Fried Chicken over BBQ Chicken, even if it is Caribbean BBQ. I’m not sure if that is comparing apples to oranges. Maybe I am comparing apples to apples – different styles of chicken – like Honey Crisps to Granny Smiths, no?

I would recommend, however, getting to Smalley’s Caribbean BBQ and Pirate Bar in the summer. They have a great patio not too far from the water. Get thee there if you can – ARGH!

How about you – which would you pick if you had the choice: fried chicken or BBQ chicken?