This is a very difficult thing for me to post. I wasn’t sure if I wanted to do it. But I’m going to…

Because I am alive.

Because my husband is alive.

Do NOT scroll down if you get squeamish at the sight of blood.

First, meet the car I bought in October of 2014 – Rob affectionately calls it Sharkie because of the little “fin” on the back.

It’s the newest car I’ve ever owned. I was so excited to have power windows! And I’ve always wanted a silver car. It was kind of a roundabout way that I got it; but I won’t bore you with that…

Instead, I want to tell you something more important.

I already had a post in my head that I was going to share with you on Monday the 15th: Why We Don’t Celebrate Valentine’s Day.

But now I think Rob and I will celebrating it going forward.

You see, Rob and I were run off Interstate 35W on Valentine’s Day. We were in the right hand lane and a red minivan came over into my lane. It wasn’t malicious. At the time of this writing, I don’t even know if they knew they did it. To avoid getting hit, I moved over to the shoulder….

Oh, writing this and reliving this is hard… But no matter what I do, it just keeps replaying over and over in my mind.

It was only lightly snowing, barely a dusting, really; so the roads weren’t bad and traffic was going about 60 mph. But at this point, we were forced over to the shoulder, which was complete ice. I knew we were going into the ditch. But what I didn’t know was at the speed we were going, this would create such an impact that we would roll over two or three times until we crashed into the noise wall.

We landed at an angle in the other direction. See the noise wall on the left.

Let’s take a step back. Because how my mind reacted to everything as it happened was very strange – not like me at all. As we started to roll I thought…

“Thank you. Thank you.” {I haven’t even told my husband that part yet.}

My mind was more focused on the outcome of this crash. “Thank you. Thank you,” meant, “Thank you for our safety.”

I know, it sounds strange, even to me.

Once our car stopped, propped up by the noise wall, I thought more about the problem at hand.

“AUUGGGHHH!?” he yelled. “Where are we?!!!” He was afraid we were in the middle of traffic. I explained that we were against the noise wall facing the other direciton.

There was blood on his wrist and all over his jeans. His back hurt. He had blood on his head. His wrist looked broken. But he said it didn’t hurt. We determined that he could wiggle his fingers and toes.

“Where’s your phone?!” I couldn’t find mine. I thought it had been in my back pocket. And I wanted to call 911 right away.

“I think it flew out the window.”  The entire passenger side window was gone.

More people came. A couple of those who stopped were off-duty nurses. They had Rob apply pressure to the lacerations on his wrist. We wrapped his scarf around it. He wasn’t wearing a coat. They gave him blankets.

Everyone was stunned with how okay we were. I was fine. I didn’t feel pain anywhere.

Sharkie had saved us.

“What happened?” Someone asked. People were willing to stay with us until rescue arrived.

“There was a red minivan that came into our lane and ran us off the road. Did they stop?”

No one could see a red minivan pulled over.

We heard the sirens. The rescue team had arrived.

Don’t scroll any further if you get squeamish at the sight of blood.

Rescue asked us if we were okay. I could hear them discussing the best way to get us out of the vehicle since we could not open the door on that angle. It was determined that they would cut off the door. If that didn’t work, they would cut off the roof. They warned us that it would be very noisy for a while and made Rob cover his head with the blankets so no debris or glass would hurt him.

I felt strange taking these photos. But at this point, I had found my phone and Rob wanted me to document it. It was going to be a bit before we could get out anyway…

Notice that the airbags did not deploy…

They used what I guess is the Jaws of Life to extract the door. (I expected them to be bigger!) 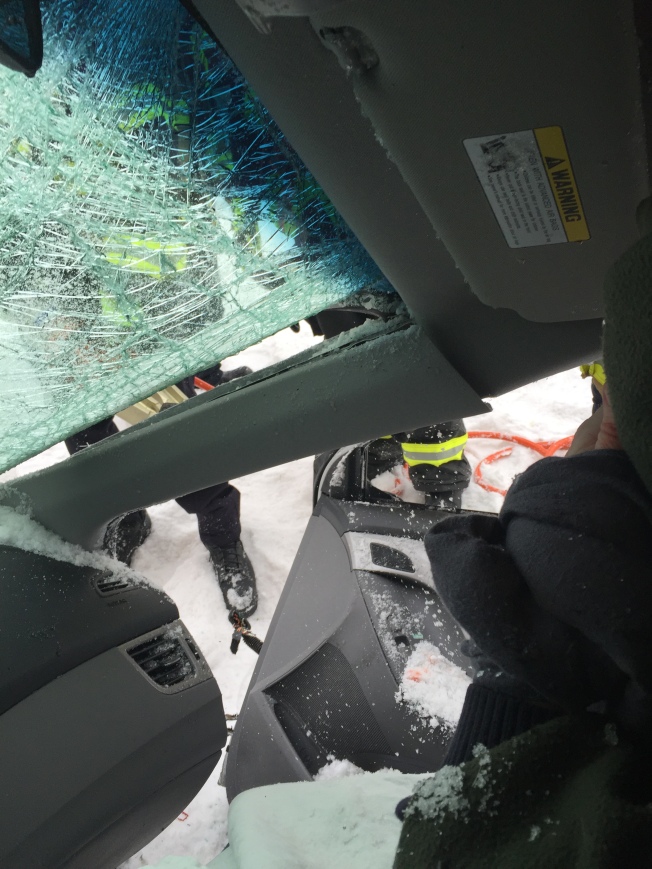 They wanted Rob on the back board because he was having back pain; but he said it was just sore, so they let him crawl out. As they were trying to get me out, the Fire & Rescue worker was trying to put the car in park. I had already tried that. I couldn’t, which meant I couldn’t turn off the car either. But it wasn’t going anywhere.

I was lead to an ambulance, all the while looking around in snow for Rob’s wallet/cell phone. I didn’t even think to look for the red minivan or take a look at the shape of my car. Once inside, I waited for Rob, who they wanted secured on the backboard until they knew his back was okay.

They took my blood pressure.

They asked what it normally is.

“I don’t know what’s good,” I said, “but they always say that it’s really good.”

Of course, they expected my blood pressure to be high after an event like this, but the EMT was surprised when he said, “Your blood pressure is perfectly normal.”

I was calm. It was strange. It was not like me.

Once they secured Rob in the ambulance, I told them to unwrap the scarf because the bump on his wrist looked like he had broken it.

“But it doesn’t hurt!” he kept saying.

They found his phone/wallet. Another plus.

Upon arrival, I spent a lot of time in the ER giving all of Rob’s info as well as our auto and health insurance while they asked him a lot of questions.

They wanted to inspect his back, but getting his sweater off was difficult.

“How much do you care about this sweater?”

They cut it off and tossed it on the floor.

They couldn’t see anything wrong, but wanted to take him for a CT scan. They removed his jeans, too, because there was blood on them. They wanted to make sure there were no leg injuries. 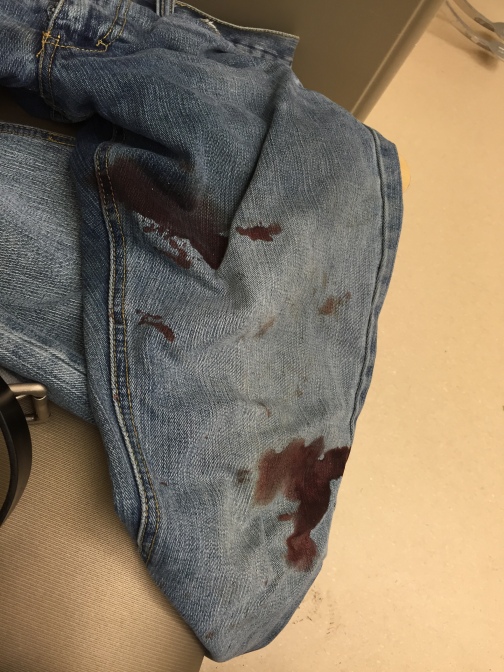 The blood was from his wrist. 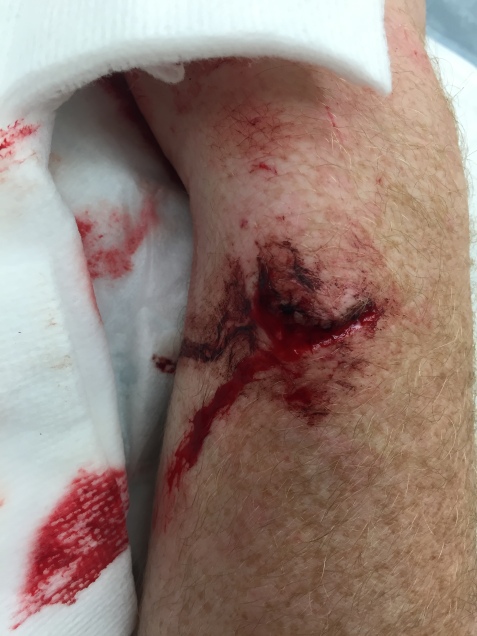 His CT scan on his back, neck and head came back clean, despite these scrapes on both sides of his noggin.

It was time for X-rays on that wrist. 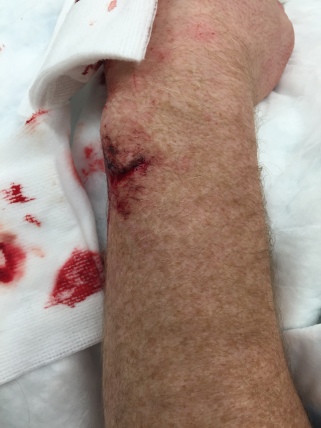 The x-rays showed that his wrist was not broken. He had glass lodged in it!

They numbed that baby up and about an hour later the doc went “fishing”. It took quite a while before the dislodged the biggest piece, about the size of a dime, but much thicker. 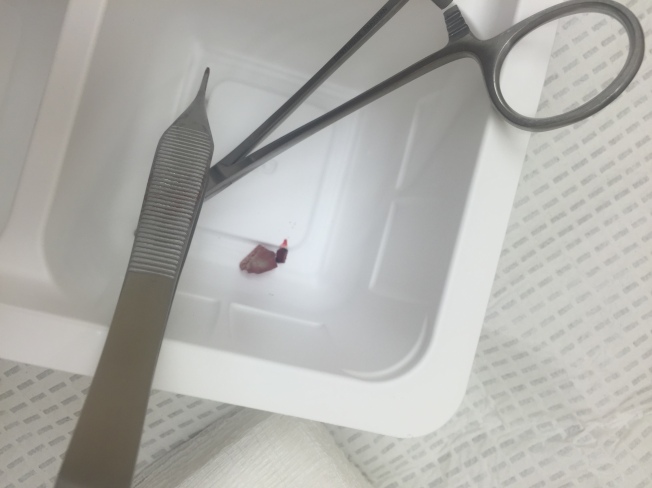 Then, there were more x-rays to ensure all glass was removed. Then he was cleaned and stitched up.

All of this took approximately 6 to 7  hours. There was a lot of waiting.

I could almost say that I walked away from this thing without a scratch, but while we were waiting Rob noticed a “scratch” on my neck.

We had a laugh at that. Yeah, I didn’t have it so bad. I did end up with a huge bruise on my hip and being sore for three days after; but I was so lucky, all things considered.

During all of the waiting, I tried to call our parents and the insurance company; but no one could hear me. The signal wasn’t very good. Instead, I texted my friend Jen to let her know we had no intention of seeing the movie we had suggested the previous day and told her what occurred.

“What hospital? I can come.”

“How are you getting home?”

I hadn’t thought of that. She said she was available to pick us up that evening, to just give her a call. Have I mentioned yet how lucky we are?

We were on our way from shopping at IKEA to having lunch when our car flipped about 1:15pm. We had breakfast at 9am. We got home at 7:30pm.

Our car flipped three times and we got home at 7:30pm.

I’m ever so grateful.

Obviously, this is not a sponsored post. This is purely my experience.

And I lived to tell about it.

Wear your seatbelt. And send this to someone who doesn’t. You could save a life.