Last weekend, while Rob was out of town, Shamrock started barking loudly at the front door. No one had even rung the doorbell. I went to the door and peered out. No one there. I went to the dining room to look out that window… AHA!

Diablo’s owners never did return our call. So we figured that they are okay with him roaming the neighborhood. I actually saw him earlier that morning when I went on my run. He darted out of our driveway toward his house {presumably}, but hid behind the curb at the intersection, with his little ears seeming to peer apprehensively over the tall grass of our neighbor’s yard. I just said, “Hello!” and went on my not-so-merry way. {It was a hard run.}

When Diablo spotted me in the window, he came towards it. Even when I put a chair up to the window so the dogs could see, he didn’t seem phased by their barks. 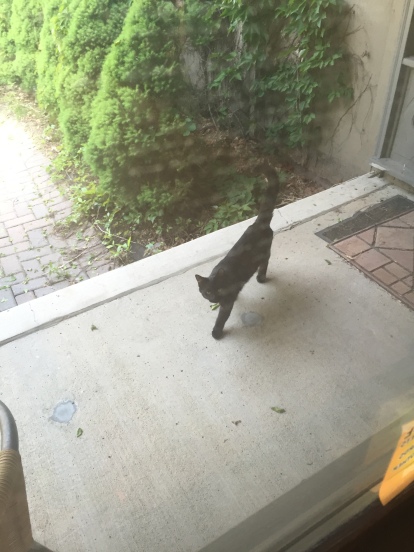 I did not grow up with cats; so I’m not sure how to take care of one. I mean, that litterbox stuff and all that. I do like kitties, but learned I was allergic after countless sleepovers at the neighbor’s place as a kid. My eyes swell up so badly. I have since learned that I can usually be around them as long as I make sure not to touch my face after petting them!

Diablo made himself at home… 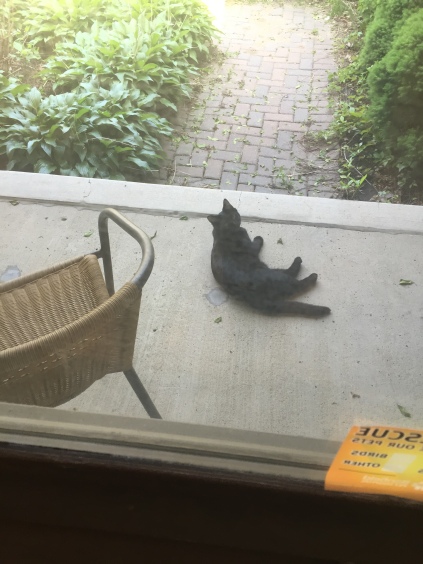 Seems quite comfortable on our porch, no? Our dogs are semi-used to cats. I say this because Rob’s parents used to have a cat named Westie. Whenever we’d go to visit, Sophie would play with him. They’d use their paws to box! It was so adorable. Until one day, when Westie passed away. The next time we went to visit, Sophie went into the house and immediately went looking for Westie – under the bed, in all of his hiding spots. When she came into the room where all of us were catching up and just started whining, my heart broke. 😦

Rob’s parents now have Abby, with whom Sophie does not play. Instead, Sham terrorizes her. As he does our friend Sally and Ryan‘s cats when we visit them! I *think* he is just playing… 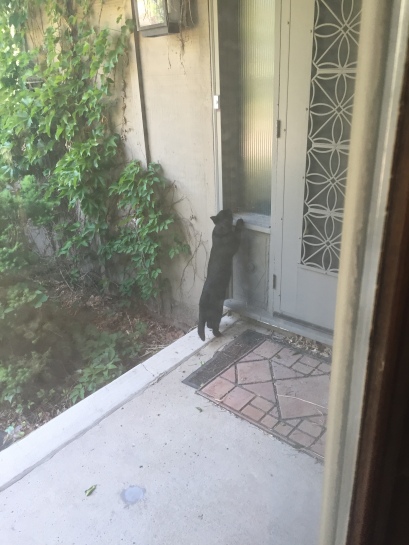 I’m not sure if I want to find out if Sham is just being playful or not!