Rob and I had a date with our friends Sally and Ryan to check out a cocktail bar called Constantine.

As we descended the parking ramp, Sally pointed toward a building across the street.

“Monello? Wonder what that is!”

“Oh that’s one of the Italian restaurants on our wishlist!” I said.

“Should we do dinner there?”

I thought it would be great, but I knew it was a bit spendy; so I wasn’t sure we’d all want to stop. Perhaps after a drink at Constantine.

“It’ll be too busy,” Rob said. “We don’t have reservations.”

But as we walked into the Ivy hotel toward the stairs to make our way down to Constantine, we noticed straight ahead was the entrance to Monello. It, too, was located in the Ivy Hotel! The patio looked lovely – and nearly empty! Before we knew it, we were out there, too…

The bartender was also our server. He explained that Monello is a modern take on Italian coastal cuisine. He also explained that the menu is designed to encourage you to try five to seven courses, but that most people go with two or three.

I asked for a gin cocktail recommendation…

I never know what half the ingredients in a cocktail are, but I loved this one! Rob loved it so much that he ordered one later, too.

We were kind of all over the place with our numbers of courses; but the staff handled it beautifully. To start, we were served some amuses-bouches as well as some of the best focaccia bread I’ve ever had.

It was served with both cow’s milk and goat’s milk butters!

The goat’s milk butter on {on the right} was the winner. It was so light and creamy!

Only Sally and I got starters. I wanted to try a crudo and asked for a recommendation between two.

Call me what you will, but I just can’t handle the eyes on my dinner. I don’t know why I didn’t consider the fact that this might be served this way! I did my best not to look at them and ate the cold, slimy flesh. The texture was a little too much for me, but I loved the crispy basil and the charmoula sauce. When the bartender came out to check on us, he has me if I got all of the good stuff inside the shell where the head is. I said, “No. And I don’t think I can…” Because it was the truth.

Sally also went outside her comfort zone and ordered the bartender’s favorite thing on the menu:

She loved it! The octopus, understandably, reminded her of calamari. Then came our pasta courses. All the pasta is made fresh and in-house here! You have the option of ordering a small or large portion. Sally and I both went with smalls because we had our starters.

Sally said she wanted something with a rich sauce, but the fazzoletti dish wasn’t rich at all. I think he may have recommended it because it was a brown butter sauce and perhaps one of the “richest” on the menu.

Ryan and I both ordered the Tortelli. The difference between the small and the large was four versus eight tortelli, respectively. You can’t see the beautiful tortelli in this photo, but it was phenomenal – fresh-made and delicate with pillowy ricotta inside. The sauce was like a pesto. This was my favorite dish of the night… and pretty much everyone else’s, too!

Rob had a large serving of pasta for his main course. There wasn’t much on the menu he could have, being that the focus at Monelli is on seafood. Have you noticed how beautifully plated everything is? I felt like we were on Top Chef. 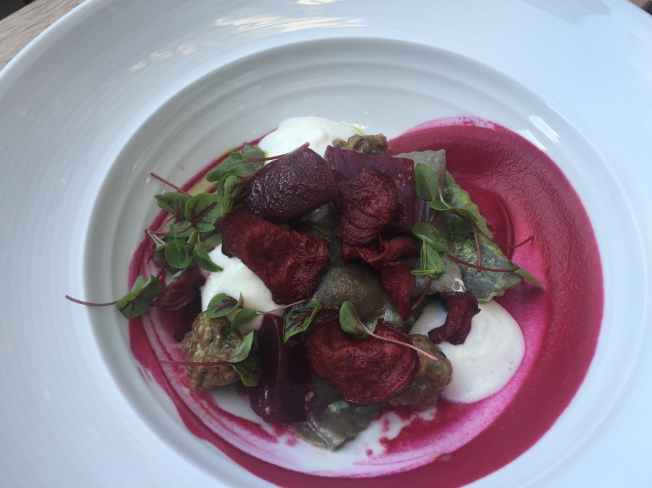 I was surprised that Rob ordered this dish because of the goat cheese, of which he is not a fan. He expected a few little clumps of it. However, the dish tasted very much of goat cheese because the agnolotti were filled with it. He said he could still appreciate the perfectly cooked pasta. Unfortunately, he only had three little pieces of sausage. Although he did like this dish, he much preferred my pasta to his.

When you are at a restaurant that prides itself on offering Italian Coastal Cuisine, get the seafood, right?! I really wanted the scallops, even though the description sounded a bit boring.

And it really was. The scallops were cooked nicely, but the rest was just… boring. Sally ordered the same. I still liked the crispy basil on the top. And I’m very glad I got a few different courses so that I discovered something I really liked. {The pasta!}

Plus, I asked for a wine pairing recommendation to go with my scallops and got to try a new-to-me varietal! Timorasso, Colli Tortonesi-Derthona La Colombera 2011 ($15) – described as a “rare varietal from the Piedmont that delivers an umami hit like a secret handshake.” Yes, it was a unique white wine!

While the tortelli seemed to be the star of the entire night for all of us, Ryan said his steak was right on par.

So when in doubt, I’ll go with the steak and pasta here. Monello has received many, many rave reviews. I can see why! While I didn’t love everything I ordered, it’s probably just because of my not-completely-refined tastes. Everything was delicately plated and there was so much attention to detail. The service was top notch, too. Recommendations were always offered and each dish was described as it was delivered.

You’ll spend a bit of money, but if you are going out for a special occasion, Monello will be worth the experience!

Where have you had the best fresh pasta?