This month’s Girls’ Dinner Night Out took us out for some Salsa a la Salsa. Rob laughed and said he was so glad he wasn’t included in this. He’s not a huge fan of salsa, nor would he want salsa on top of his salsa. HA!

I had been to Salsa a la Salsa once, probably over 10 years ago near the Convention Center. I didn’t remember much about it. However, we were venturing to their new location – in Uptown.

This was one restaurant where I did not look at the menu before dining. Can you believe it? My friend Jen was certainly surprised. But really, how can you go wrong with Mexican food?

We ordered some cocktails {obvi, not pictured}:

As I know how much I tend to fill up on chips and guac at Mexican restaurants and then tend to overdue it on the entree, I decided to order some soup instead. Both the Cilantro Chicken Soup and the Pozole de Pollo sounded great. I was really in the mood for chicken, specifically shredded chicken. Is that weird? I made my choice based on the recommendation of our server:

The juicy shredded chicken was just what I wanted! The tostada on the side was a nice, refreshing accompaniment, too. However, the flavor of the soup was a bit boring. That was, until I realized under those limes was some onion and cilantro to dump in it… DOH!

Kim’s tamales looked out of this world. That sauce and all that cheesy goodness! 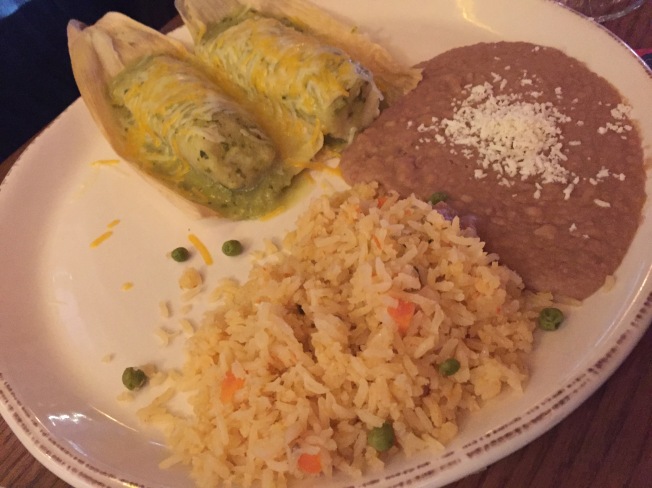 But I think Jen, probably ordered the healthiest and most desirable dish {to me anyway!}

The juicy, flavorful barbacoa couldn’t have been better. Those green beans were well-seasoned such that I wanted to eat them like fries. Jen barely made a dent in that plate. I think she took home what could have been two or three more servings. I’d definitely get this dish next time!

And in GDNO tradition, we headed to a new-to-us coffee shop: 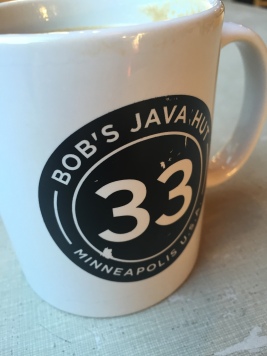 We generally choose our coffee shops based on proximity to the restaurant. Kim is usually in charge of searching for one once we get into the car. 🙂

What I really liked about Bob’s was that dogs are allowed! There was one beautiful dog there while we were and treats on the counter for those who bring them in.  Also, this…

I don’t quite understand the significance of the number 33 everywhere; but Bob’s Java Hut was great for handcrafted cuppa and conversation regardless. 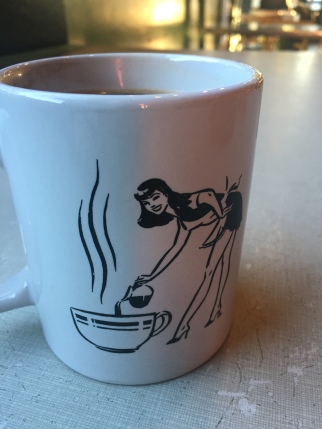 What are your favorite Mexican style foods?

Name a place you are happy {or unhappy} that dogs are allowed!