I chose Québec as our international travel destination this year for a few reasons:

We wouldn’t have enough time to explore the countryside, but decided to fly into Québec City, stay a few days, then take the train to Montréal. We had learned that Montréal is truly a food destination!

Our flight from JFK to Québec City was overbooked. There wasn’t another flight until the following day. The final going rate for the taker to remain in NYC was a $1200 Amex Gift Card (or flight voucher) and paid overnight stay. If only there had been two seats overbooked!

Arrival at the tiny airport in Québec City did feel foreign! Going through customs took a bit of time, but was uneventful. While looking at our passports, the agent asked, “Are you celebrating anything special?” Just as I was about to respond, “No, just vacation,” Rob declared, “POUTINE!” Yes, this made everyone laugh.

I decided to wing it with currency. I figured we’d just hit the ATM upon arrival. However, I was getting a bit nervous when I hadn’t seen one because the only way into the city is via taxi! Luckily, I found the lone ATM at the very end of the airport. Whew!

Our taxi took us to the Vieille Ville (old city) aka Vieux-Québec. Yes, you do feel like you are in a European city with all the cobblestone streets and stone buildings! 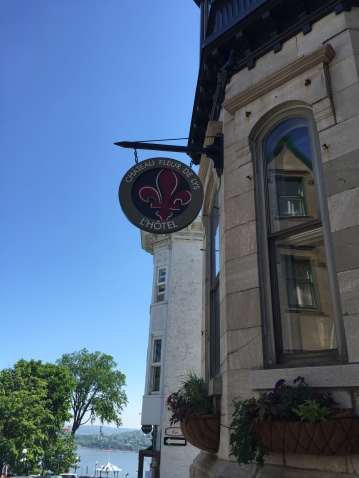 The Château Fleur de Lys was a cute, quaint, cozy hotel that I found it on Orbitz. Beware, if you book this hotel, you’ll need to climb the stairs with your luggage. {This is common in old European hotels, too, and did not bother us because we packed fairly light.}

Québec City {hereafter shortened to just Québec because that is what the locals call it} is very walkable. Just be ready for a lot of hills! Our hotel was located in the heart of Haute-Ville (upper town) in Vieux–Québec, not too far from the most photographed hotel in the world Château Frontenac.

We could easily walk a couple of blocks to the Terasse Dufferin, which is perfect for a little stroll… 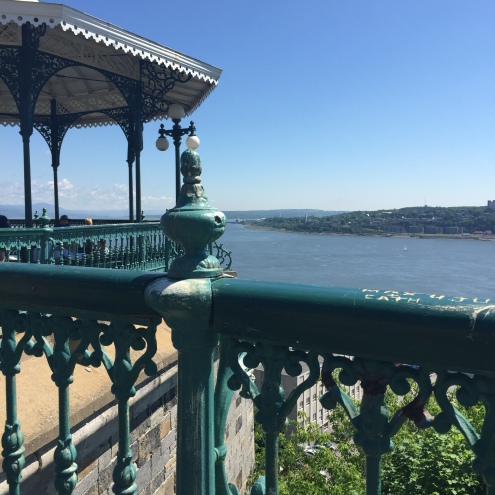 And there she was in all her glory…

We were recommended to have lunch or a cocktail in Château Frontenac’s cafe or bar. It is highly recommended to go inside to take a peak… But until then, you can get about a 1000 photographs of the hotel at all different angles and light.

Our room was small, but cozy. {To be clear, I’m jumping back to the Château Fleur de Lys. We did not pay to stay at the Château Frontenac!} Upon arrival, I thought our room was tiny, like many European hotel rooms. But it quickly grew on me. It was comfortable and felt like home at the end of exploring each day! 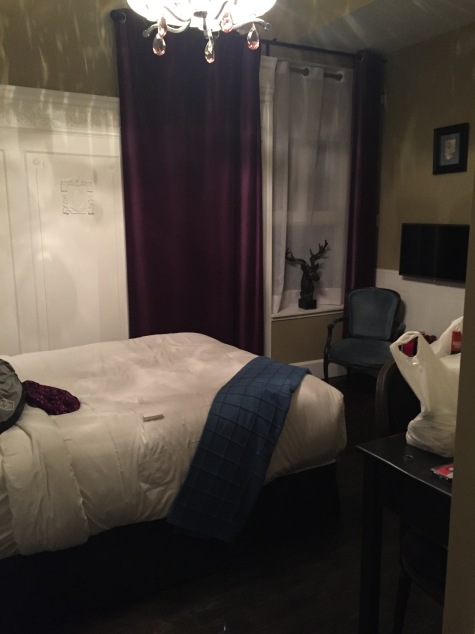 Behind that purple curtain, we even had a door to a tiny, private terrasse (patio) out back were we could enjoy local wine and cider that we had picked up. {We quickly learned how much the Québécois love their terrasses!}

We enjoyed this ^ local cider that was packaged in a wine bottle! We quickly discovered several versions of Les Vergers de la Colline CID Cider widely available the rest of the trip. In addition, we purchased the bottle on the right:

Maple Cider! I was quickly learning new French vocabulary that I never had to learn in France. Of course, you can find sirop d’érable (maple syrup) flavored anything in Canada! Why not?! 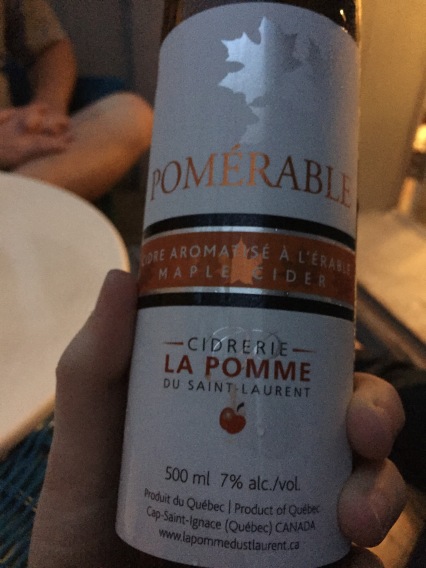 I wanted to try as many local products as possible. And of course, since this was supposed to be chilled, we had to drink it immediately that night… out on our terrasse. 😉

But Rob had a different idea about trying the local products…

He’s been doing this for years whenever we travel. You see, has an obsession with chips, especially anything new to him! I was in awe when I accompanied him on his first trip abroad – to Paris, where he brought a half-dozen different flavors of chips back to our hotel room… If you know Rob personally and are reading this blog, you’ll have to ask him his favorite flavor this trip!

And that’s our hotel and the immediate surroundings… More to come!

Do you have something you always buy or try when you travel someplace new?