Today Will be Different
by Maria Semple (fiction) – worth a read

Semple is probably best known for Where’d You Go Bernadette, which I have not yet read. I liked this character’s honesty about how she feels. It was a quick, easy read; but in retrospect, I can’t remember the ending. I probably didn’t like it.

The Girls
by Emma Cline (fiction) – worth a read

This book had so much hype and high ratings. I was on my library waiting list for a long time before I received the notification that it was ready to be picked up. Cline is a definitely a talented writer. She can describe situations in such a beautiful way and envoke a mood. And while the story content is very intriguing, I felt some of the book was left unfinished. Not necessarily the ending, but maybe parts of it. There are also pieces that were either never explained or that had me confused what the purpose was to the story. I’m still not 100% sure why she was so fearful at the beginning of the book nor what she was really doing, other than reflecting.

Behind Closed Doors
by B.A. Paris (fiction) – must read

Yes! I never *think* that I’m a person who likes thrillers, but once I got a bit into this book. I couldn’t put it down. One Sunday, I made my husband wait until I was finished with it before I would go out to dinner.

I find the tagline on the book, “The perfect marriage or the perfect lie?” kind of annoying and it almost turned me off at first. But guess what? I loved the ending. And not because of what happens. You figure that out way before the story actually ends and it’s just the details that matter. The ending I liked was the very last page – and the dialogue that transpires.

Another Brooklyn
by Jacqueline Woodson (fiction) – worth a read

Woodson is a poetic author. I think I would have enjoyed this book more if I had a big chunk of time or a long afternoon to read this. Instead, due to life circumstances, I was only reading tidbits at a time and I had a hard time picking up where I left off. It’s a short book, so it should be savored in one or two sittings, I think. This is the second book of Woodson’s that I’ve read. I’m starting to see a theme in her stories… 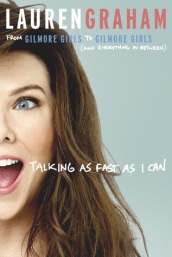 Yes, I’m a Gilmore Girls fan and spent Black Friday binging (boy do I hate that word) the revival with one of my best friends. I found it so wonderful to revisit that story that I was somewhat confused by all of the backlash after it aired! Still, Graham’s book became available at my library shortly thereafter. I guess I didn’t know a ton about her; my only intrigue was the show. But I learned a bit more about her through the book… and how crazily the Gilmore Girls Revival all came together!

One of my favorite lines:

But life doesn’t often spell things out for you or give you what you want exactly when you want it, otherwise it wouldn’t called life, it would be called a vending machine.

Graham also wrote a novel – Someday, Someday Maybe – which is on my “to-read” list.

Maybe next week I’ll recap the best books I read all year.

What is the best book you’ve read this year?