I’ve been a soup kick lately, if only because my husband is!

To be quite honest, I was just looking for a way to use up all my leftover ingredients from an Egg Roll Bowl recipe, I made out of the Skinnytaste Fast and Slow cookbook. I had a lot of bok choy and Napa cabbage to use! I found this Asian Chicken Soup recipe, but substituted my leftover pork from the Egg Roll Bowls. It was a winner in my book when it comes to using up leftover ingredients that I don’t want to waste! 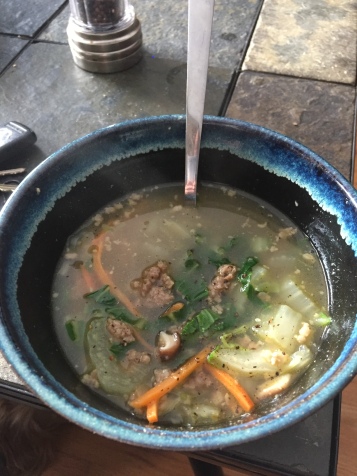 And for the last of the cabbage I attempted to make this Healthy Chicken Ramen Bowl. 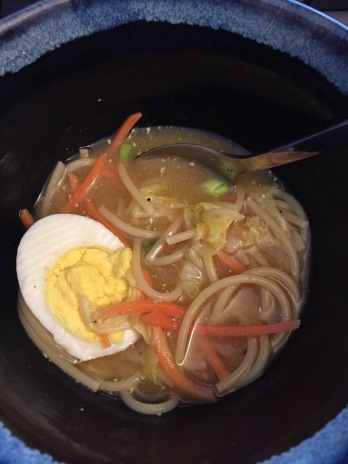 Okay, so that’s not a pretty picture. The egg didn’t come out soft-boiled like I’d expected; but I like hard-boiled eggs, so I didn’t mind! My chicken came out tough. But the broth was oh-so-flavorful!

Then more recently, after I broke one of my favorite beautiful bowls (WAH!) that you see in the photos above, I made this Swamp Soup. 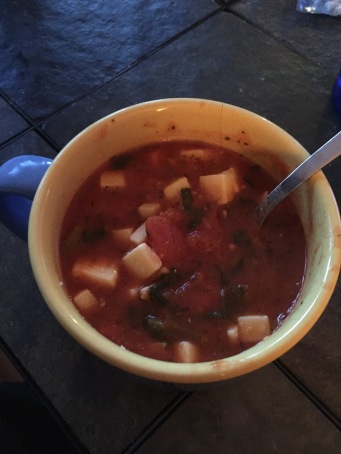 A more traditional Swamp Soup is made with andouille and collard greens; but Beth from Budget Bytes says she called it this because it just looks swampy with the spinach floating around in it. When Rob kept raving over this soup, it was a WIN for me. This means we’ve got a soup chock full of all the veggies we normally don’t get enough of and we can also control the sodium.

We used sharp cheddar instead of the Swiss and it was wonderful. This one is going into our recipe arsenal. I scaled the servings down to six instead of the suggested eight, but that may make too big of a bowl! I think I’d do the 8 servings next time and just freeze a bunch. It comes together really quickly, especially if you just chop all the veg the night before.

Since we’ve been making more soups lately, I liked Beth’s suggestion to freeze any leftover carrots or celery for future soups. I always end up with so many leftover carrots and celery stalks when I actually buy them for a specific dish. This sounds like such a simple and obvious solution; but to me, it’s genius.

Here are some other soups we are hoping to try in the coming weeks:

What is your favorite soup recipe? We’d love suggestions!