Every time I abandon the blog for a bit, I’m not sure where to jump right in… Sometimes I feel the need to explain what’s going on. Sometimes I have too many ideas and things I have wanted to post but too much time has passed.

I didn’t think things could get much worse after the difficulties of last year, but 2017 has posed its own challenges. Most of them are happening to people I know well and love. And it’s hard to watch and I’m constantly trying to figure out the best way to be there or them and often feel like I’m falling short.

Our life circumstances have changed, too.

We had the best weather and one of the most wonderful weekends the weekend of Mother’s Day. It was the weekend that we finally tested to see how our dogs would do if we took them out in public on dog-friendly patios.

Here they are on the patio at Bald Man Brewing that Saturday:

Then for dinner at Burger Jones on Sunday: 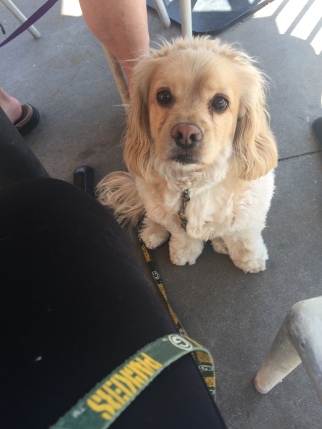 I am so proud of their behavior. However, there were no other dogs present. I wonder how that would change things. We ended that weekend playing cribbage out on our broken deck. I was more content than I’ve been in a really long time. That was until I got the call – the call that my boss’s house was on fire.

I know, poor me. At least I turned my 30-minute commute into a audio-book wonderland.

But now, my-best-boss-ever is displaced and is awaiting his home to be rebuilt. Our company’s servers and computers were salvaged and we have set up shop back at my place. So my commute is now much shorter; but I wouldn’t have wished for this ever. Let’s just say it hasn’t been easy. And when I think about the sleepless nights and worry I’ve had over the last couple of weeks, I sometimes feel guilty because at least I have my home. Even the $4000 repair my husband needed on his vehicle the very same week feels silly to worry about, too.

Because in the end, everyone is safe.

And as we all know, that’s what is important.