Before we left for vacation, I did a little research to find out if there were any local breweries we could hit. We were flying into Jacksonville, where there seemed to be a few. However, our destination was St. Augustine and I only found one real brewery there: 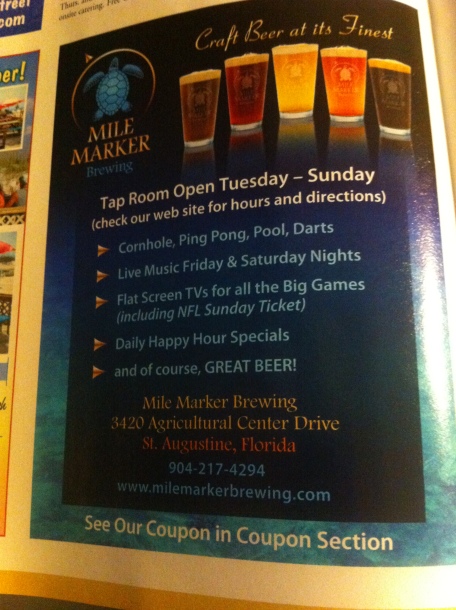 Steve and Terri are new to the craft brew scene, but were willing to adventure out on a rainy afternoon. As per the usual, this craft brewery was a bit out of the way in an industrial park. They often brew out of a garage. This was a new experience for Steve and Terri! 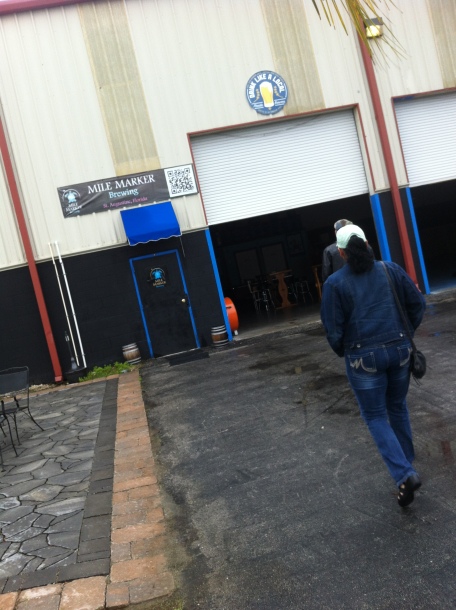 Mile Marker Brewing is named for St. Augustine being a mile marker off of U.S. Highway 1, which starts at zero in Key West. They also seem to love dogs here, which is evident by the other sign I saw and posted a couple of days ago. I also like their Hurricane Evacuation Plan:

They have a lot of offerings, including a few guest brews… 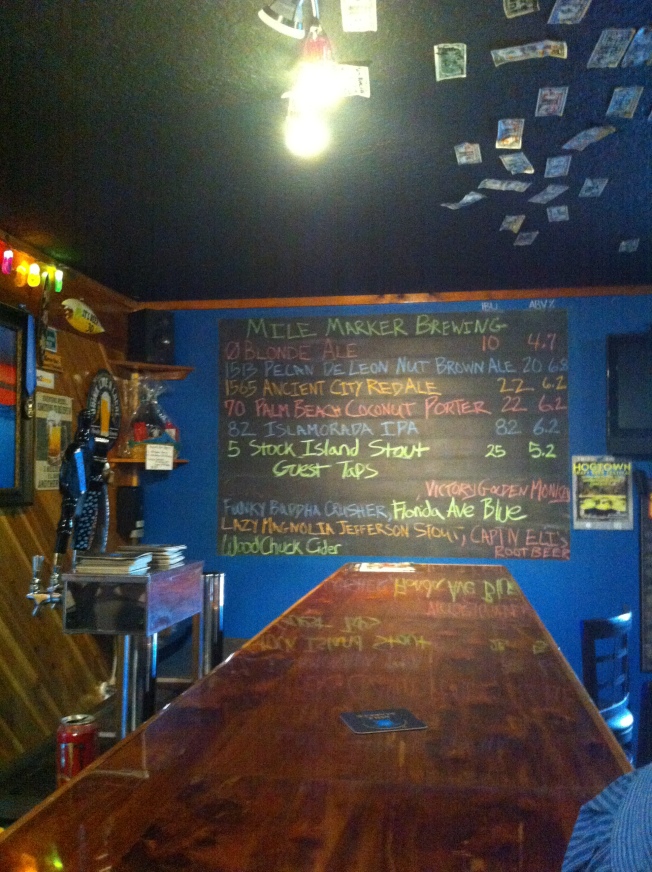 I was glad that Steve and Terri got a sampler so that they could try out a few to learn their tastes: 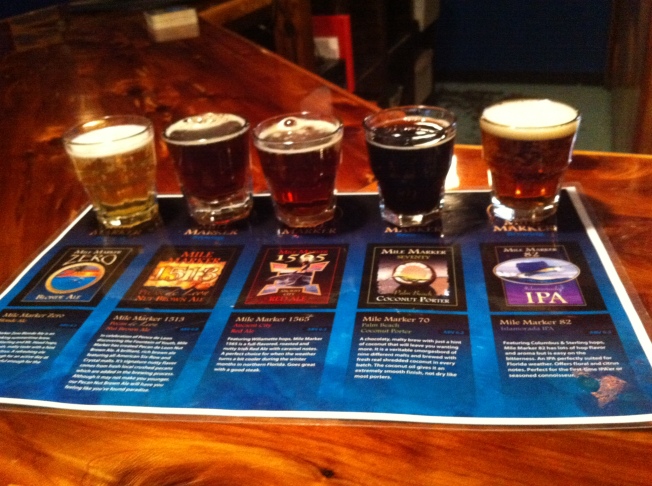 Steve’s favorite was the Blonde Ale and Terri’s fave was the Coconut Porter, which is also what I ordered. Rob enjoyed the IPA. 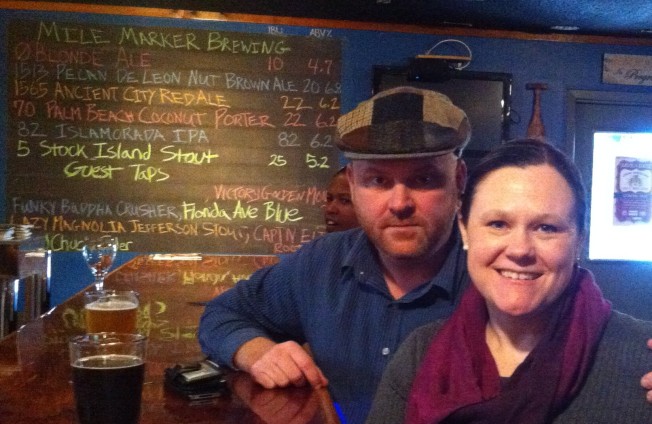 I just love their logo, which was designed by a local artist:

All of the games are free at the brewery! We decided to play a game of darts. I don’t think I’ve ever played on an a traditional cork dartboard where we had to tally our Cricket score on a chalkboard. Loved it! 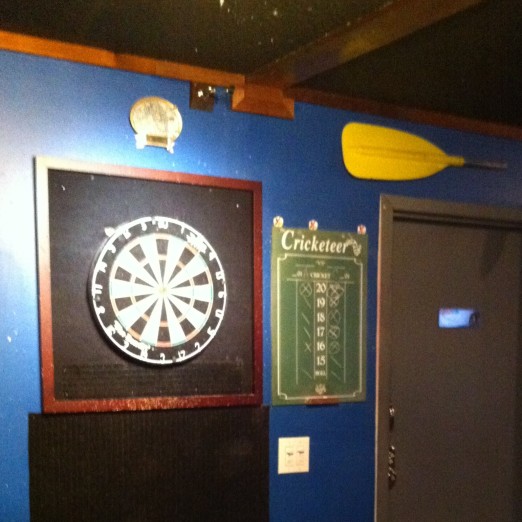 After we played the best out of three and it seemed to get too hot indoors; we made our way into the garage where we decided to compete in a triathlon! Darts was the first leg. We’d play a game of Cornhole and Pool to finish it off. 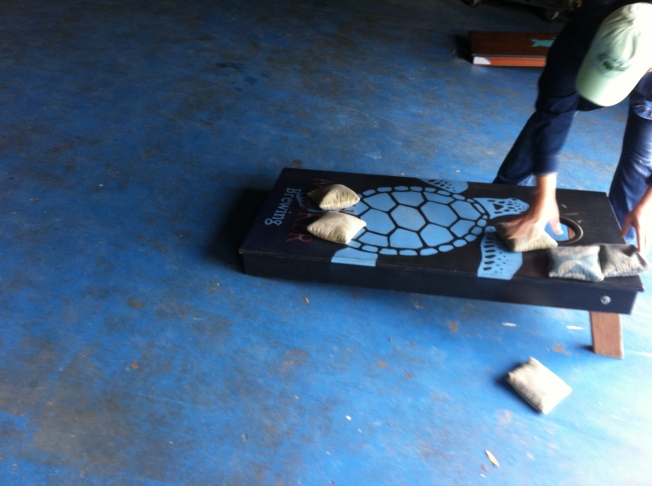 Let’s just say that I have no skill at cornhole. I didn’t think it’d be that hard because I’ve played a game like this with bean bags when I was a kid in grade school. But I was pretty much useless. On the other hand, Steve and Terri are pros! 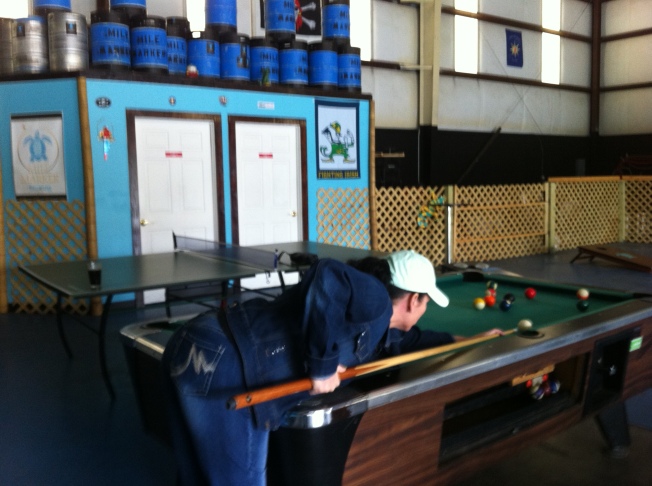 We thought we’d finish up with pool; but do you notice the ping pong table in the background? We had to finish off with that and make it a quadrathlon! I mean, why not? {Did I mention that it was free to play all games?!} 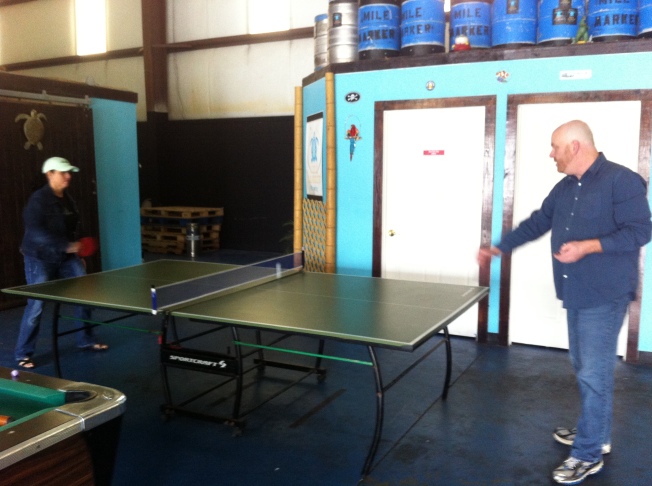 Rob’s a ping pong master. During our turn, Steve and I just tried to keep the volley going and not keep score. Not a true game, I suppose. But it was a great way to spend a rainy afternoon. And it was only the beginning of our adventures that day. Come back tomorrow to find out where we went next!

Where is your favorite place to play bar games and what games do you like to play?

Are you in a league for any of these games?