This one is long overdue.

We first heard about Devil’s Advocate via a Groupon about a year ago. We’ve been back probably a half of a dozen times since and we don’t live anywhere near downtown Minneapolis. What impressed us first was their rotating tap selection. It’s one of the best in the Twin Cities. On our first visit, the bartender told us that they only get one keg of each beer. So once it’s gone, they switch it up. It’s constantly changing.

Devil’s Advocate – the 1st place where I’ve had a lambic fruit beer on tap.

We’ve returned on a few occasions, like when we had company in town and wanted to walk around Nicollet Mall {DA is located just a block off Nicollet on 10th Street} and for a late lunch/early dinner reward after our LOST 15k walk. We love to go on a Saturday or Sunday afternoon when there aren’t any big events going on downtown, like a Twins game.

The thing is, I didn’t post on this gem before they changed their menu!

It used to be a nearly all-meatball menu, where you’d choose the protein source of your balls and then the sauce:

Then you’d choose the number of balls. You could opt for a bowl of balls or ball(s) on a bun.

It’s one of the few restaurants in the Twin Cities that I know of where you can find my beloved pretzel bun!

That is why I always find myself ordering triple balls:

After determining the pork balls were my favorite on the first visit, I continued to order them each time. They are well-seasoned with a nice little kick of spice on the finish. However, my in-laws found them a tad spicy. While I didn’t consider them spicy the first time I had them, I see what they mean. A word of caution for those of you who don’t like too much spice: These meatballs may be considered a bit spicy for Minnesotans. I think that it’s the mushroom sauce that I liked best, too. The sandwich is finished with melted mozzarella. I can’t tell you how satisfying this is. And I never order meatball sandwiches. In fact, it’s not something I ever think of ordering and I probably never would have if they wouldn’t have started out as a meatball joint.

And if you couldn’t make up your mind, they also gave some combo suggestions for their balls:

And if you weren’t particularly in the mood for meatballs, there were always appetizers and daily specials:

We’ve tried the poutine and mac and cheese… 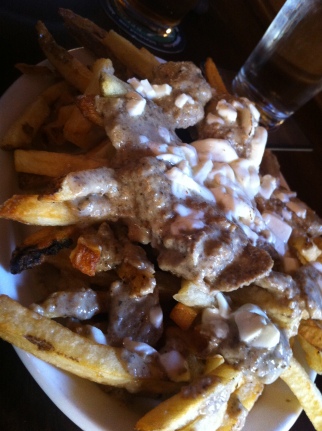 …neither of which were particularly impressive. However, the meat covering the fries is the same meat that is used for their pork balls. That’s a plus.

Rob has also ordered the burger, which he described as “average.” 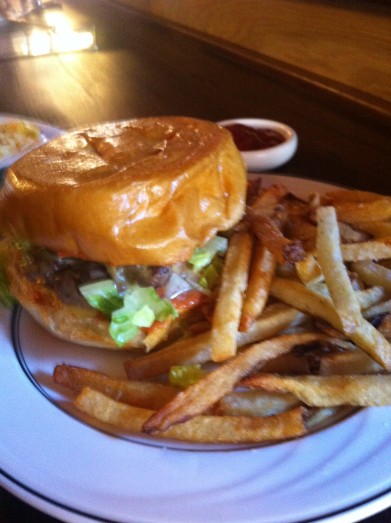 But then, earlier this month, I received an email in my inbox with a link to an article entitled:

This is the Best Philly Cheesesteak in all the Twin Cities”

So we did the research…

Beers are listed in alpha order by brewery. Let’s zoom in.

Brewer, Name and type and/or style of beer – origin price

Then you get a nice description, which we’ve found, while subjective, is generally pretty accurate. The % ABV is the percentage of Alcohol By Volume. Then they list the style or size of glass in which the beer is served.

Tip: If you aren’t sure if you are going to like a beer, ask for a taste before you order.

There were so many beers that suited us this time around!

We ordered those before we had a chance to peruse the entire beer menu. And before we even took our first sips, we spotted something on tap that we completely missed! 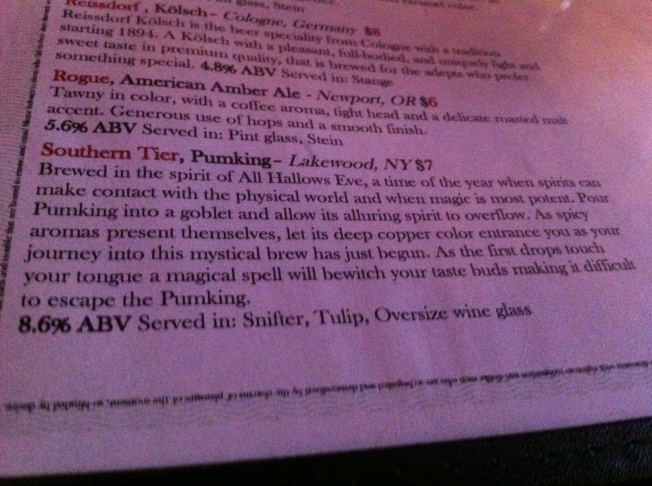 By now, you should know how much we adore this beer. The funny thing is that we aren’t huge into pumpkin-flavored things normally. In fact, I get a little pumpkin-ed out in the blogosphere by winter.

And while there are still meatballs incorporated into the menu, they are no longer the focus:

I was looking at ordering the Meatball Hero, but the descriptions are pretty vague. So I asked about the pork balls I loved and if they still had the pretzel bun.

“Yes!” the bartended exclaimed. “That’s our Holy Grail!” I hadn’t even noticed that on the menu. Somehow, I overlooked it. And there is no way I would have known it was on a pretzel bun by that description. 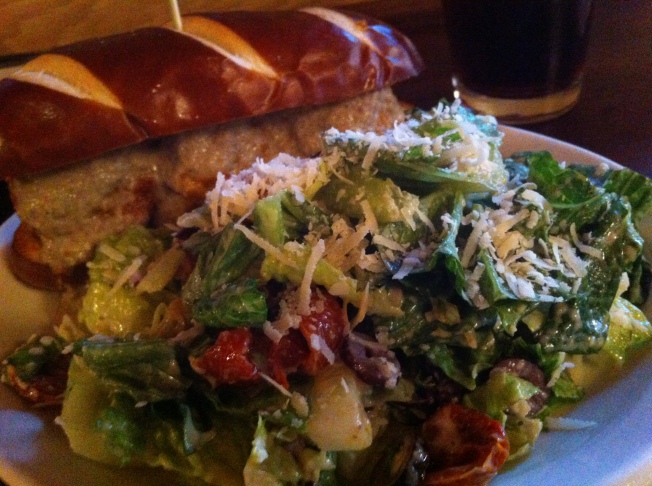 I’m not sure how many meatball sandwiches there are in the Twin Cities, nor do I think I’ve ever ordered one anywhere else. But I’d still have to say this is the best. I was so completely satisfied after this meal. It was near perfection. And that side salad up there? One of the best I’ve had. I subbed it for the fries, which are currently on Rob’s Top 10 Fries List, but I think he may be changing that soon.

And now, what you’ve really been waiting for…

Rob actually let me have a couple of bites of this Philly Cheesesteak, which he agrees is the Best in All the Twin Cities. I concur myself. The bread is crusty on the outside, chewy on the inside and it seems that some of the cheese sauce is poured down on the bread before the meat is laid upon it. Then the meat is topped with the cheese sauce. Even if that isn’t how it’s done, the cheese is so well-distributed that that’s how it tastes like it’s done.

Rob loved the Cheesesteak at the Bulldog in St. Paul just the week before, but this one is even better. In fact, I’d go as far as to say that it’s perfection.

It was either Groupon or another deal site that introduced us to Devil’s Advocate; but it’s the satisfying food and excellent beer selection that keep us coming back.

What meal do you find comforting and satisfying?