I heard on Robert Irvine’s Restaurant Impossible that the slowest night of the week for restaurants is Monday. It makes perfect sense. Weekends will be busy. When it comes to the start of the week, people get back to their routines and often reconnect with health or financial goals.

In Europe, you’ll often find restaurants closed on Mondays. You may even see that where you live.

But for those that are open, one way to get people inside…

Monday just happens to be Half Price Wine Night at one of the most convenient restaurants for us South of the River – Roasted Pear. And this post is long overdue.

We’ve been frequenting this place for quite some time. In fact, The Pear (as we affectionately call it) has been in business for about ten years now – just as long as Rob and I have been together!

For us, this place is an easy choice. We can always get a seat, even if it’s just at the bar. We know what we like {and don’t like} to eat there. And the service is great. {Shout outs to The Michelles, Olaf and Dan!}

So the wine list isn’t stellar, but it’s inexpensive. Actually, even when it’s not half-price, it’s affordable. My only beef? Reds are not usually the right temperature. They have what looks like a cellar where they house the wines, but it is not temperature controlled. Red wines should not be warm. They should not even be room temperature. Go for cellar/basement temperature and you are usually golden. To rectify this? I ask for a wine chiller to bring it down a few degrees.

My absolute favorite wine to order on half-price wine night is the Edmeades Zinfandel:

This is a flavorful wine for any restaurant. It’s any wonder why I choose any other wine when we go there on Mondays. I do like to vary things a bit and try new things. But a lot of the other reds on the menu, I have found, have that “sweet” generic taste to me.

Because we’d easily spend $25 or more elsewhere on a crappy bottle of wine any given night, we decided to try The Pear’s highest price wine ($50) on a half-priced one night. We knew it would be a much better value.

Only that wine really was a Decoy! The menu (shown below) said that the wine was from Napa Valley (most known for its cabs), but the one we received was from Sonoma. But it’s a region I love anyway!

One Monday not too long ago, the lights went out while we were dining at The Pear. In fact, the entire block of businesses had a power outage. Michelle was bartending and brought out flashlights for her guests. And some of us lit up our tables with our cell phones. However, when one diner left, the headlights of his car shown through the window illuminating our half-price wine bottle like this:

Actually, we see a lot of people who are dining alone ordering a bottle on half price wine night. I’ve even seen one couple who ordered a red for him and a white for her. Yes, they had two bottles of wine at their table. Why on earth? Because you can doggie bag it! Why not get what you like?

We honestly don’t love everything at The Pear. But we do have a few favorites that never do us wrong! First, you can always start off with a good bowl of soup.

This is the best tomato soup I’ve had in the entire Twin Cities. {Sul Lago takes a close second.} When they finally put this soup on the menu full-time, I felt that it was the best thing they ever did. For just $5, you can get a filling BOWL {they don’t serve it by the cup} of Tomato Basil Soup topped with a grilled-cheese crouton. It is served with of a triangle of their yummy bread topped with herbs and served with a composed butter:

But at dinner time, you can’t order a grilled cheese with their tomato soup. 😦 Instead, I opt for the Cheesy Garlic Bread. Dip it right in the tomato soup. I’m not telling you that this is low-calorie or healthy by any means; but you won’t be disappointed! During Happy Hour, you can get the Cheesy Garlic Bread for just $4, making your entire dinner just $9 when you add the soup.

We are nearly always pleasantly surprised with their pizzas. {Note: We hear that you won’t find pizzas at the Brooklyn Park location. As I understand it, they don’t have a pizza oven.}

The Reuben is Rob’s favorite pizza. It’s what he orders the majority of the time. The Thousand Island you see above is not how the pizza arrives though. While the crust is absolutely perfect, the pizza doesn’t always turn out consistently the way he wants. So he orders an side of Thousand Island, just in case. Before we boxed up and took this half of the pizza home, he poured the remaining dressing on top.

If I’m to order a pizza at The Pear, it’s often this one:

During Happy Hour, you can get a mini version of the Margherita Pizza for just 5 smackaroos.

There is a signature item on the menu that cannot be missed: 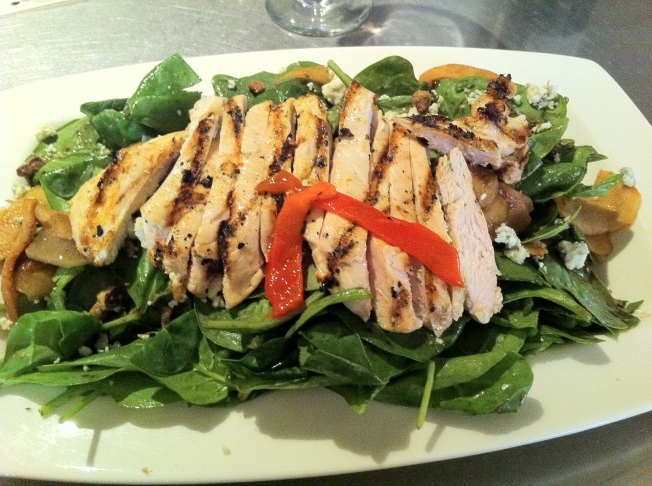 I adore this salad! But I love spinach and always add grilled chicken. So, it makes me happy. The salad, I’ve found, hasn’t been consistent either. Sometimes it’s under or overdressed or there is a limited amount of blue cheese. You can always ask for the dressing on the side. But somehow, I think that’s wrong here.

We also have liked:

~ Roasted Pear Baked Brie (though it’s been years since I’ve had it!) – $10.50 – Caramelized onions and roasted pears wrapped in puff pastry

~ Rotisserie Chicken – $15.50 – Rubbed with a house spice blend and served with vegetables and choice of potato, as well as a salad to start

~ French Dip – $9.75 – Slow roasted beef and swiss cheese on a french roll with au jus (Ask for a side of horseradish sauce to give it more of a kick.)

What we have tried a few times at The Pear and haven’t really enjoyed are the steaks {minus the cajun tenderloin bites app} and the burgers. The fries aren’t memorable either. But we know we can get our favorites of those elsewhere and know what we really come to The Pear for that we can’t get anywhere else!

The Roasted Pear has a very nice Sunday brunch, something I’m usually not a fan of when it means a buffet. Not included in the brunch, but something I like to order is a Bloody Mary. It was my fave Bloody Mary for a while. It’s still good, I just have a few others that have topped it since.

Roasted Pear Blood Mary {meaning it belongs to the RP, not that there are roasted pears in it!} with beer chaser

Brunch is reasonably priced and includes the choice of sparkling wine or mimosa, their brunch buffet {which I normally won’t do!}, and your choice of a made-to-order Eggs Benedict on an English muffin. Once I get my complimentary beverage, I’ve got quite a variety in front of me. {Sometimes there is even coffee, too!}

What I like about the Roasted Pear Brunch is that I can put a teensy bit of everything on my plate. They even have their Roasted Pear Salad on the line! One thing I never order off of any menu is lasagna. But The Pear’s is to die for. So I can nab just a bit at brunch time, without ever having to order it as a heavy meal in and of itself.

And then there is dessert. I usually am filled up on my Eggs Benedict and one plate of food; but if there is room, I might try a couple of mini desserts to enjoy with my remaining bubbly.

We rarely get dessert on any given night. But if you do, you must try their signature Roasted Pear and Craisin Crisp. Per their website, it’s “Pears and cranberries baked with a crunch topping served warm with vanilla ice cream.” It’s not something I’d normally ever order; but our table split it once and I was won over immediately!

I love that The Roasted Pear incorporates pears, especially roasted ones, in so many dishes on their menu. We love The Pear for it’s location, friendly staff, casual atmosphere and the signature dishes that you can’t really find elsewhere.

Happy Wine Wednesday! Twin Cities peeps, stay tuned in the next week or two… I have a Half-Priced Wine gift for you… 🙂

What’s your favorite signature dish at a restaurant?

Do you go out for half-price wine nights?