One late Sunday afternoon, Rob and I decided to have an early dinner at one of our favorite Hipster joints – The Lowry. {Yes, I know. We’ve been there soooo many times and I still need to post about it.} However, forgetting that the Vikings’ game was in town, we ended up in the throes of traffic. Before we got stuck amidst it all, I called an audible {get the football reference?!} and told Rob to exit. We headed over to St. Paul to another Blue Plate restaurant – the Groveland Tap.

We had only been there once before. This time, we were able to pull a seat up to the bar. We were happy to see that one of our favorite Twin Cities breweries – Steel Toe – was featured on tap with their Size 7 IPA. And it’s always nice to see the local Surly representing, too.

But we just had to have a bit of PumpKing since it is our favorite pumpkin ale and it was on tap. We wanted to make sure we didn’t miss out on the last of it. It’s probably one of my Top Ten Favorite Beers, if I were to have such a list… Hmmm…

We also tried a the local Lucid Seasonal which was pretty good, too. If I remember correctly, it was even on Cask. Wait, it was! I just found a photo I took of the board that listed all of the beers: Lucid Amber with Pumpkin Spice & Clove. 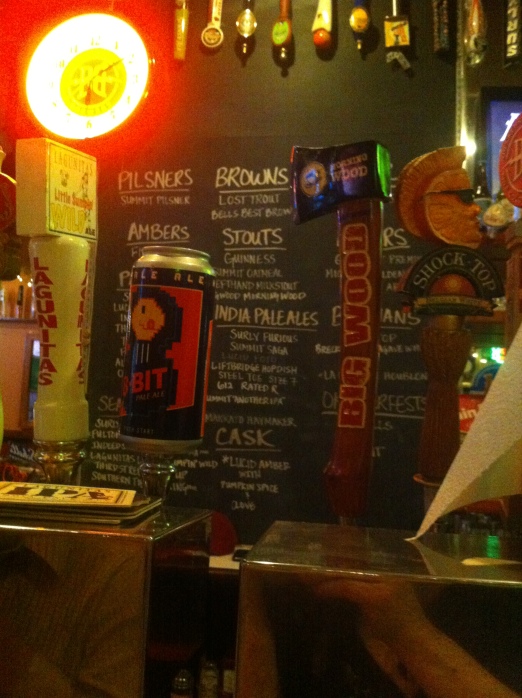 I was indecisive on what I wanted to eat and eventually ordered the Turkey Burger because it sounded similar to the one I love over at the Lowry, a sister restaurant. There’s no photo here, but rest assured I devoured it and a had few of the Cajun fries that came with it. It was very good, but not exactly the same as what I remembered from Lowry. But here’s the other thing eating that turkey burger reminded me to do:

It’s what they put on their turkey burgers and I love it. There’s something about poblanos that I’ve learned from cooking out of The Homesick Texan, that gives Tex-Mex its flavor without being spicy like, say, a jalapeno. You know me, all about flavor.

I thought Rob would go with a Juicy Lucy, since he loved it last time. But he decided to go with the Patty Melt, instead, and this time with Parmesan-Garlic Fries. 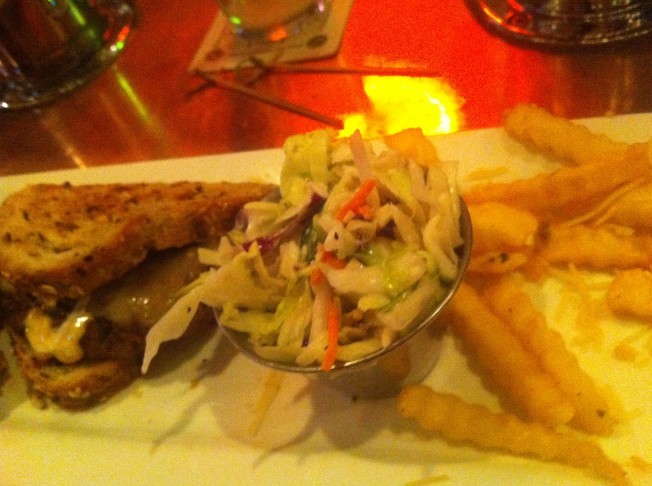 So, while the photo does this burger no justice {it was an afterthought}, at least I snapped one. Rob said this Patty Melt has usurped his best Patty Melt at Harry’s Café! It sounds like it’s time to update the Top 10 Burger List! And those parmesan-garlic fries put the cajun ones to shame.

So this is our formal personal reminder note:
Get the parmesan-garlic fries next time we find ourselves at the Groveland Tap.

I mentioned that Groveland Tap is part of a group of restaurants owned by Blue Plate. Normally, I’m turned off by chain restaurants. It’s not a chain per se. Each of these restaurants has its own unique menu, character and overall feel. And the food is really good. We’ve been pleased every time. I liked this sign outside of Groveland tap that describes each restaurant:

And a quick skim of the Blue Plate website indicated that a new restaurant called the Freehouse is opening in December. I think we’re going to have to check that one out!

What are your favorite burger toppings?

Have you ever topped with poblano pesto?!