We’ve been through Hudson, Wisconsin, plenty of times; but it is a rare occasion when we actually stop there. In fact, the only times we’ve stopped in Hudson (just over the border from Minnesota) is when we had a purpose for going there, like visiting my friend Jared at Urban Olive and Vine.

It was a Groupon that brought us to Pitchfork Brewing. And while not technically in Minnesota, I’m listing it under MN Breweries, because it’s basically just outside the Twin Cities Metro area. Maybe one day I’ll update that page to all of the breweries we’ve been to in the U.S.

I just love the Pitchfork Brewing Logo – a pitchfork stabbing a hop flower!

We knew that we would have to find somewhere to eat in Hudson, too, if we were going to spend a little time at Pitchfork on a Sunday afternoon. Hudson is a good 40 minutes from our house.

Our friend Jared wasn’t working, so we considered going back to Stone Tap. Yet we wanted to try some place new. I put Rob to work on that one. We originally planned on stopping at The Nova Wine Bar, which we learned is not open on Sundays. Rob’s boss suggested the Postmark Grille, which was our front-running choice.

But after a little Google map search, Rob found an Irish Pub that appeared to be right next to Pitchfork Brewing.

Oh, yes, an Irish Pub. You know how we love those.

And sure enough, after we exited I-94 and took a left on a road that then veered left and and became a dirt road, we thought we were all of a sudden in field. But it turns out, there is a little strip mall down the way, practically in the middle of nowhere. We had arrived. 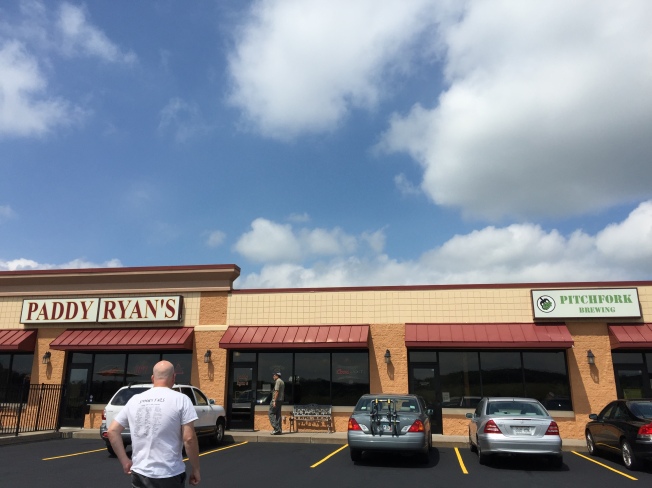 We stopped first at Paddy Ryan’s. You cannot tell by the photo above, but there is a nice little outdoor patio. During our visit Rob asked if that patio was dog friendly, because he could see it as a great stop-off the highway either to or from our trips to Green Bay with the “kids”.

The answer was “Yes.” 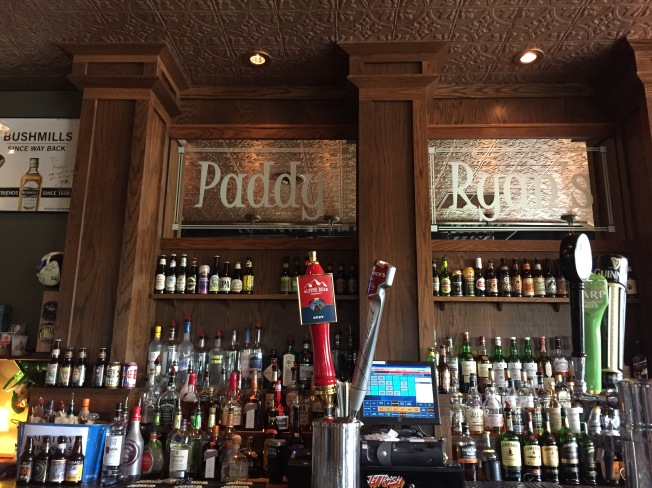 Of course, we sat at the bar. It was pretty dead on that Sunday afternoon. So except for the few people out on the patio, all of the patrons were at the bar. No one was sitting at the tables. Most people were watching the Twins game. Wait, weren’t we in Wisconsin now?

The menu options were quite varied and intriguing. I had a really difficult time deciding, despite how hungry {I thought} I was! Plus, Yelp reviews were getting in my way. There were so many good ones. At least that was a good sign.

Finally, Rob and I decided to split a couple of things:

Rob was most intrigued by the boxty, which surprised me because I thought he hadn’t liked it in the past. However, every pub that offers it seems to have their own version. Rob was leaning toward the Corned Beef and Cabbage Boxty, but reviews recommended the Jameson Medallion version. A quick inquiry of our bartender resulted in a response without hesitation, making our choice easy.

As suspected, Rob wasn’t fond of the boxty, but he liked the tender medallions just fine. Overall, the dish was fine, but there are too many other things on the menu I’d like to try if we go back.

Rob adored the sausage rolls. I thought that they were quite good, too, but can’t imagine that they are made in-house.

After lunch at Paddy Ryan’s, we walked through the adjoining door over to Pitchfork Brewing. There was no reason to even step outside!

It is a pretty small, but cozy taproom. We sat at the bar and contemplated what we would order.

Our Groupon inluded two pints of beer and a Growler.

Rob chose the American Gothic IPA {gotta love the name!} pictured above, which he loved. I went with the Dry Stout, which was good enough to finish, but nothing exceptional.

Rob enjoyed a second brew – an English Bitter on Kent Golding Hops. It was tapped from the firkin behind the window!

I liked that they served the firkin in a British-style pint glass. 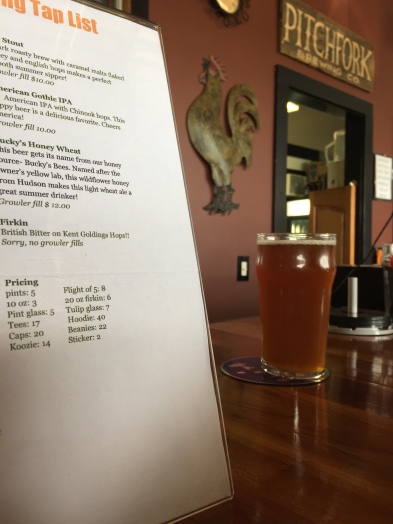 While he savored that pour, I requested a sample of the Grain Witch Black IPA, which was my favorite of the day. We originally planned on filling our Growler with it, but went back to the American Gothic IPA when we heard that it was almost empty.

And that, my friends, is our trip to Pitchfork Brewing. Rob plans on refilling that Growler on his next trip up to a friend’s cabin in Hayward. Kind of nice stop, dontcha think?

Do you get Growler fills of beer where you live?

If so, what is your favorite brewery to do and what beer do you fill it with?